A NASA probe has just now collected material from the surface of asteroid Bennu, some 200 million miles (322 million km) from Earth.

Over the course of four hours, the agency's OSIRIS-REx spacecraft inched toward its target on Bennu – a 16-metre-wide crater named Nightingale – at a nail-biting pace of just 0.2 miles per hour. At 1512 PT (2212 UTC), NASA engineers whooped and cheered on a live-stream as ground control confirmed the probe had touched down and sampling was in progress. A minute later, the team were told OSIRIS-REx had completed its sample retrieval, and had backed away from the asteroid.

The material was gathered by firing nitrogen gas from a capsule at the surface, and collecting the dirt kicked up by the puff in a scoop.

“This was an incredible feat – and today we’ve advanced both science and engineering and our prospects for future missions to study these mysterious ancient storytellers of the solar system,” said Thomas Zurbuchen, associate administrator for NASA’s Science Mission Directorate at the agency’s headquarters in Washington.

“A piece of primordial rock that has witnessed our solar system’s entire history may now be ready to come home for generations of scientific discovery, and we can’t wait to see what comes next.”

Preliminary data show that today's sample collection event went as planned 👍 More details to come once all the data from the event are downlinked to Earth. Thanks, everybody, for following along as we journey #ToBennuAndBack!

The NASA team now has to assess how much of the asteroid was picked up, which will take a day or so. The OSIRIS-REx team will check images of the equipment, and perform a series of spins to find out how much extra mass the spacecraft has acquired. The passenger-bus-sized probe carries three nitrogen capsules, all designed to blow dust and small pebbles into the craft's collecting vessel, and can therefore make two more runs for cosmic dirt if necessary.

The OSIRIS-REx spacecraft blasted off from Earth in 2016, and has been circling Bennu after reaching the rock two years ago. After scoping out the perfect landing sites, the probe has now carried out its first touch-and-go operation having rehearsed the process several times over the past few months. 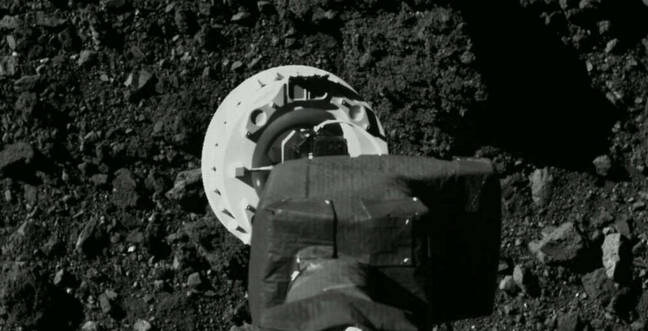 Space probe snapped this photo of its sampling equipment as it reached the asteroid ... Source: NASA

To collect the material, it fired its thrusters and headed toward Nightingale near the asteroid’s north pole. Next, it carefully extended its 3.35-metre robotic arm, known as the Touch-and-Go Sample Acquisition Mechanism (TAGSAM) toward Bennu’s surface. The spacecraft focused its cameras downwards and reoriented itself before it descended.

As it slowly made its way down, it tucked away its solar panels to prevent any potential damage from grazing the walls of the asteroid. Finally, the spacecraft touched down in the crater, fired off one of its nitrogen gas canisters to blow up loose particles from the ground. These were then scooped up by its sampler head. And voila, the maneuver was over in a few seconds.

It was not an easy move to pull off, considering it had to briefly touch down within an area that’s about three-parking-spaces-wide. Bennu, which is about 262 metres (861ft) wide, is also littered with hefty boulders, one nicknamed Mount Doom, and landing on one of them would potentially damage the spacecraft.

Although OSIRIS-REx was seemingly successful in retrieving regolith from the asteroid, whether it has enough of the stuff remains to be seen. NASA wants at least 60g (2 oz) of asteroid dirt, ideally up to a kilogram, brought back to Earth so that there’s more than enough to go around for multiple teams of scientists to study back on our home world.

Luckily, that shouldn’t take too long. NASA is expected to share the images of the sample in a news conference on Wednesday.

Bennu was carefully selected for a sample return mission for its pristine material, believed to contain water and clays forged during the birth of the Solar System. The regolith will help scientists learn more about our planetary system formed more than 4.5 billion years ago, and possibly how asteroids like Bennu may have delivered the chemical compounds needed to support life on Earth.

If OSIRIS-REx, indeed, has captured a sufficient amount of regolith it’ll bottle up the sample in a capsule and head back to our planet, and re-enter our skies in September 2023. Then we can really take a look at what makes the Solar System tick. ®