We know there are a lot of, er, distractions right now but NASA's got some sweet video of its asteroid rubble raiser

Video NASA on Wednesday released images and video footage of the moment this week when its OSIRIS-Rex spacecraft scooped some dirt from the asteroid Bennu, some 200 million miles away. The plan is to send the sample back to Earth for boffins to study.

“This amazing first for NASA demonstrates how an incredible team from across the country came together and persevered through incredible challenges to expand the boundaries of knowledge,” NASA Administrator Jim Bridenstine said. “Our industry, academic, and international partners have made it possible to hold a piece of the most ancient Solar System in our hands.”

Bridenstine told reporters at a press conference last night that NASA has now broken the record for orbiting the smallest object yet. The OSIRIS-REx probe has been circling Bennu, a space rock that’s slightly wider than the height of the Empire State Building, and on Tuesday conducted the most critical part of its mission – when it retrieved a sample of pebbles and debris from the asteroid’s surface. 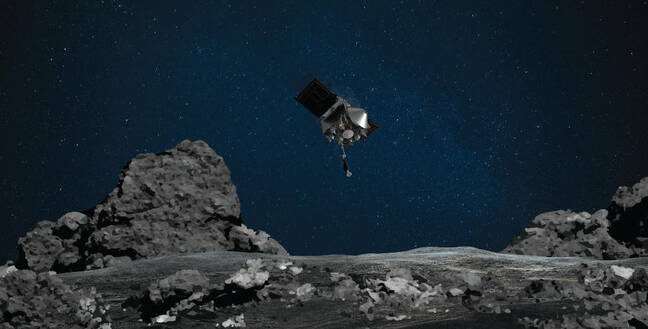 In the pipe, five by five ... An illustration depicting OSIRIS-REx just before it touched down on the asteroid and jumped off with some of its surface material. Source: NASA/Goddard/University of Arizona

The spacecraft's robotic arm known as the Touch-and-Go Sample Acquisition Mechanism (TAGSAM) briefly grazed Bennu just for six seconds. A disk at the end of the device fired out nitrogen gas to kick up a swirl of dirt and rocks that were then scooped up.

The descent to the surface hurried along at about 0.2 miles per hour with a crater on Bennu named Nightingale. A camera on the spacecraft snapped away during the fall, and scientists had to wait hours before all the images had finished beaming back to Earth.

“I can tell you a lot of us were up really late last night,” said Dante Lauretta, the principal investigator of the mission and professor of planetary science and cosmochemistry at the University of Arizona in the US said during the media briefing.

“By about 2AM local time in Denver, we finally got what we call the money shot of TAGSAM contacting the surface. And then I finally got some shut-eye and dreamed of a wonderworld of Bennu regolith particles floating all around me.”

You can see here, in these pictures, the moment the TAGSAM made contact with Bennu. Small rocks are whizzing in the air, kicked up by the momentum of TAGSAM and the nitrogen gas. The video below was recorded by the probe as it touched down and blasted off, and now shared online by NASA:

The US space agency managed to land the robotic arm less than a metre off its target landing site: the center of Nightingale. Not bad considering that while ground control was directing the spacecraft to some extent, they were otherwise relying on onboard software to get the job done. Given that the craft is some 322 million km or 18.5 light-minutes away, real-time control is not possible. The next step is to see if the spacecraft has gathered enough regolith in its sample head; NASA wants at least 60 grams (2oz) of asteroid dirt. If not enough was collected, the probe will have to try again.

“We hope to see inside the TAGSAM head, but that’s not guaranteed,” Lauretta said. “It might have packed so much regolith that there's no light inside that we can’t see anything.” In order to measure how much cosmic rubble it has acquired, the passenger-bus-sized spacecraft will spin with its robotic arm extended, and NASA will measure the moment of inertia to measure the mass inside the sample head on Saturday.

In late September 2023, the probe's samples arrive back at Earth, and descend under parachutes, it is hoped. About a quarter of the stuff will be dished out to academics around the world to study. NASA will keep the rest, and most of it will be preserved for future generations of scientists. ®