I feel the need, the need for 16mph taxiing in safety

Rise of the Machines Boeing has successfully taxied its Loyal Wingman robot fighter jet around an airfield, a key milestone for the aircraft to operate fully autonomously.

Trials in Australia earlier this week showed that the unmanned aircraft, intended to fly and fight alongside a traditional fighter jet with a human pilot, was able to drive itself around an airport.

“The low-speed taxi enabled us to verify the function and integration of the aircraft systems, including steering, braking and engine controls, with the aircraft in motion,” said Paul Ryder, Boeing Australia’s flight test manager, in a canned statement.

The jet reached eye-bulging speeds on the ground of 14 knots (16mph) while carrying out such death shutdown-defying stunts such as stopping on demand and manoeuvring. 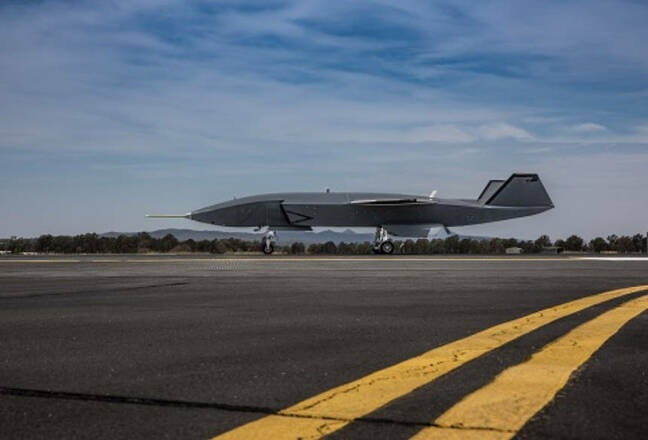 While this may sound fairly tame, it is an important step in making the unmanned fighter jet capable of fully autonomous operation – something that national treasuries will be rubbing their hands in glee at, as the cost of training a fighter pilot from scratch comes to around £2m over several years.

Actual flight is relatively easy to automate compared to the myriad taxiways, hangars and unique markings encountered at airports and military airfields across the world, and that's what this week's test was all about.

British defence ‘n’ aerospace conglomerate BAE Systems’ Australian arm also joined in with Boeing’s celebrations, with local CTO Brad Yelland saying in a canned quote that “both companies have a shared national heritage having partnered on a number of early unmanned flight vehicles.

“The partnership and latest advancement highlights our combined commitment to deliver a world-leading program to the nation leveraging home-grown engineering expertise,” he said.

Current technology allows airliners to fly themselves from moments after takeoff to landing and stopping on a runway after an intercontinental flight, though humans still need to do the taxiing around on the ground. Nonetheless, that may not last for too much longer; Airbus carried out tests on its Autonomous Taxi, Takeoff and Landing (ATTOL) project earlier this year, basing its tech on machine vision and image recognition technology while it flew itself around Airbus’ home base in Toulouse, France.

Back in the UK, BAE Systems has an “optionally manned” concept fighter jet it calls Tempest. So far nothing has been created other than wooden mockups shown off at airshows, however. ®