Water molecules have been detected in soil in one of the Moon's largest sunlit craters, NASA announced on Monday, which means permanent bases on the natural satellite may be potentially a lot easier to support.

The discovery was made using a telescope onboard NASA’s Stratospheric Observatory for Infrared Astronomy (SOFIA) – a modified Boeing 747 capable of flying 45,000 feet above our planet. The airborne 'scope spied what may well be water in the Clavius crater, which is visible from Earth, located in the southern hemisphere, and, coincidentally, the site of the Moon base in Arthur C. Clarke's classic sci-fi novel 2001.

“We had indications that H2O – the familiar water we know – might be present on the sunlit side of the Moon,” said Paul Hertz, director of NASA’s Astrophysics Division in the Science Mission Directorate.

“Now we know it is there. This discovery challenges our understanding of the lunar surface and raises intriguing questions about resources relevant for deep space exploration.” 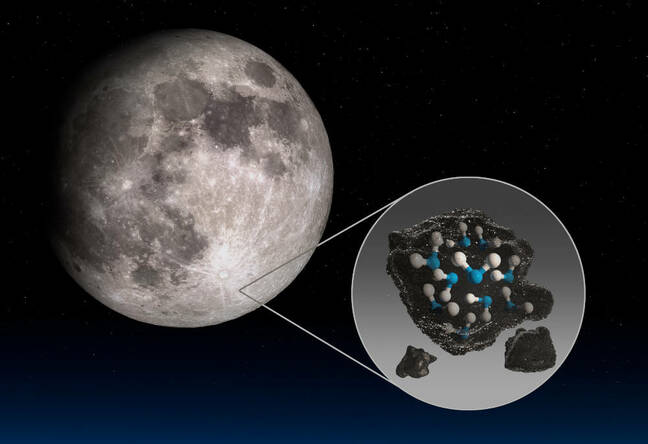 An illustration of water molecules in lunar beads and the location of the crater in the southern hemisphere of the Moon ... Source: NASA/Daniel Rutter

NASA doesn’t know exactly how much water in total is present in the crater. Initial readings, published in Nature Astronomy, show the Clavius regolith contains about 100 to 412 parts per million of water – that’s roughly a 12-ounce bottle of water, or about 355 ml of the liquid, per cubic metre of lunar soil.

In other words, the Moon is still pretty dry. The Sahara desert, for instance, contains 100 times more water than the amount found in the Clavius crater.

The water molecules are spread so thinly that they do not form liquid water or solid ice, said Casey Honniball, a postdoctoral fellow at NASA's Goddard Space Flight Center, during a press conference today. Instead, they are trapped within tiny beads, each one measuring about the size of a pencil tip. She believes the water is formed from solar wind and micrometeorite impacts.

Radiation from the Sun frees hydroxy (OH) from chemical compounds in the lunar soil, and tiny meteorite impacts provide the heat needed to merge two hydroxy particles to ultimately form water. This energy also melts surrounding material to form the glass beads that act as a protective casing to allow the water molecules to survive and persist despite the Moon’s lack of atmosphere.

Scientists know that some water is tucked away as icy deposits, known as cold traps, in the Moon's polar regions that are permanently covered in shadow. This is the first time water has been found in sunlit areas.

"Water is critical for deep space exploration,” Jacob Bleacher, chief exploration scientist at NASA’s Advanced Exploration Systems Division, told reporters during the press briefing. “It can be turned into oxygen to breathe, water to drink, or be used for fuel supply.”

The American space agency hopes to land the first woman and next man on the Moon by 2024, and wants to eventually set up a lunar base [PDF]. If water can be extracted from the surface, it’ll make living on the natural satellite much easier, and provide a way for future generations of astronauts to restock and refuel on their way to more distant locations, such as Mars.

But the idea is purely speculative at the moment. Bleacher said scientists don’t yet know how accessible the water is, though finding it in sunlit areas is good news for upcoming lunar missions.

Naseem Rangwala, SOFIA’s project scientist at NASA's Ames Research Center, said the data was recorded when its 747 flew over Nevada in 2018. It was the first time the airborne telescope had been directed at the Moon. The results are only now being released after months of analysis.

The team is planning more observations using SOFIA next year. In order to work out if the water is accessible, NASA will need to send spacecraft to collect and study samples of the lunar surface. Its next Moon rover, the Volatiles Investigating Polar Exploration Rover (VIPER), is designed to hunt for water at the Moon's south pole and is expected to launch in 2023.

Interestingly, in a separate study also published on Monday, a group of researchers at the University of Colorado predicted that the total area of cold traps on the Moon is some 15,000 square miles, double the amount in previous estimates. ®