Bork!Bork!Bork! A train with supernatural powers of prediction features in today's edition of signage behaving strangely. Who would could have known that the electronic information panel was warning passengers of what was to come?

Spotted by a Register reader at Euston station, the sign on the side of the old London Midland train is what we reckon might be an operator's attempt at humour. A hunt for a UK station called "SNAFU" turned up nothing, and we were saddened to note that Great Cockup lacks rail services.

Our reader noted: "I have to say I've only ever seen this message the once in all the years I've been catching these 350, 350/1s." 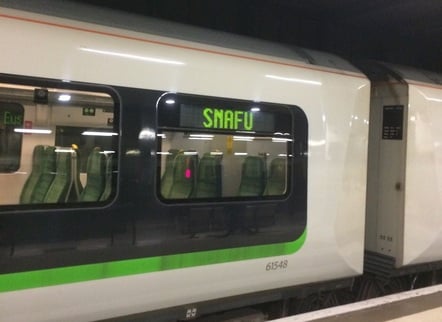 SNAFU, for those yet to encounter the acronym, stands for "Situation Normal: All Fouled Up", although the "Fouled" is generally substituted for a word not befitting a family publication such as The Register, nor the profanity filters through which it must make its way. "Situation" is also occasionally swapped out for "Status" in some militaristic settings.

And now it has found its way onto a train running on the UK's notoriously "fouled-up" rail network.

While "Destination: SNAFU" might sound like a comedy musical number, the timing of the picture puts it soon after West Midlands Trains took over London Midland's franchise for the line. We may therefore be looking at a sad little protest by disgruntled staff or unofficial rumblings of earlier industrial niggles.

Alternatively, it could be a cry for help from the sign itself. Or a little present dropped into the code by a programmer who never expected that particular branch to be executed except for those times when everything was indeed "all fscked up".

In these trying times, for public transport as well as for the rest of us, we remain impressed at the prescience of a train that somehow knew that the only destination awaiting us all was SNAFU. ®