Comets: Crunchy on the outside... frothy on the inside?

ESA scientists have identified the location of the Philae lander's second touchdown site on Comet 67P/Churyumov-Gerasimenko and revealed new insights about the space snowball's interior.

The fridge-sized lander was released from the Rosetta mothership back in November 2014, aiming for a landing on the surface of the comet. Things did not go entirely to plan as Philae was unable to secure itself on first touchdown, bouncing several times before settling in a location that left its solar panels unable to generate sufficient power.

The probe managed to achieve its science goals before the batteries were drained. Scientists hoped that contact might be re-established once sunlight fell on the panels but eventually declared the lander officially dead in 2016.

While Philae's final resting place was discovered a few weeks before Rosetta had its own date with the surface in 2016, the location of its second touchdown site has remained a mystery. The lander had collided with a cliff edge, bounced somewhere else, and finally wound up in an unfortunately sheltered spot.

The lander's sensors, however, indicated that it had dug into the surface, teasing the possibility that it might have exposed some of the ancient ice beneath, if scientists and engineers could work out where to look.

By combining the data from instruments onboard the Rosetta probe with what was transmitted by the Philae lander, the team eventually located the spot 30 metres from the lander's final resting place.

Data from Philae's magnetometer, ROMAP, proved crucial in the analysis as scientists noted spikes in the data caused by the boom moving relative to the lander's body. This gave the team an idea of how long Philae had spent stamping into the ice as it touched down. 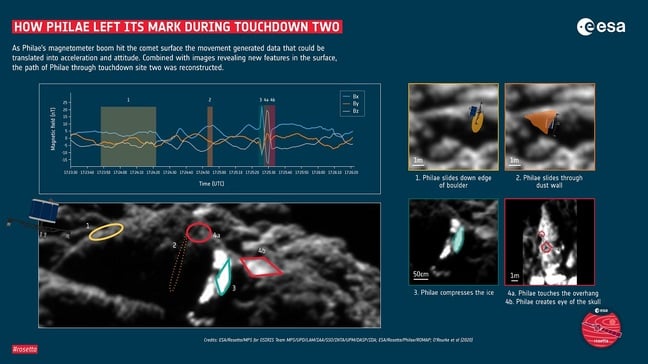 The team was also able to ascertain that Philae's second touchdown occurred at 17:23:48 GMT, a little earlier than previously thought. The lander spent approximately two minutes at the site, ploughing through the ice and making at least four distinct surface contacts. One, visible in the images, was caused by the top of the lander sinking 25cm into the ice.

The ROMAP data gave an indication of the lander's acceleration and was cross-correlated with Rosetta's magnetometer to determine Philae's attitude.

"The shape of the boulders impacted by Philae reminded me of a skull when viewed from above, so I decided to nickname the region 'skull-top ridge' and to continue that theme for other features observed," said ESA's Laurence O'Rourke, who had led the search to find the lander back in 2016.

"The right 'eye' of the 'skull face' was made by Philae's top surface compressing the dust while the gap between the boulders is 'skull-top crevice', where Philae acted like a windmill to pass between them."

Philae's slice through the surface was imaged by Rosetta's OSIRIS camera, and data from the probe's spectrometer (VIRTIS) confirmed that the brightness was a result of water ice. The area had been in shadow at the time of the landing, but was subsequently illuminated by the Sun in later months.

The ice was particularly bright in this instance because it had been freshly exposed by the tumbles of the lander.

"It was a light shining in the darkness," said O'Rourke.

Location mystery aside, the discovery of the site meant that scientists were given an unprecedented glimpse into the interior of a boulder on a comet.

"The simple action of Philae stamping into the side of the crevice allowed us to work out that this ancient, billions-of-years-old, icy-dust mixture is extraordinarily soft – fluffier than froth on a cappuccino, or the foam found in a bubble bath or on top of waves at the seashore," said O'Rourke.

As well as an invaluable resource on how future landing and sample retrieval mechanisms might be designed, the data also permitted an estimate of the boulder's porosity, which was in line with the value already measured for the comet as a whole.

While Philae's landing may not have gone entirely to plan, data transmitted by both lander and mothership has proven invaluable, as Philip Heinisch, who led the ROMAP analysis observed

"We weren't able to make all the measurements we planned in 2014 with Philae, so it is really amazing to use the magnetometer like this, and to combine data from both Rosetta and Philae in a way that was never intended, to give us these wonderful results." ®