Remember 2013? This coffee machine does: If I could turn back time – I'd reboot this PC

I'd take back that bork that hurt you, or drink tea....

Bork!Bork!Bork! While Marty McFly's Delorean remains the stuff of fiction, the power of Bork could allow you to experience 2013 while avoiding the disappointing cup of coffee that is 2020.

Imagine, if you can, what it was like back in 2013. The UK was flush with success, having managed to pull off the Olympics without making a dreadful hash of things. The Brexit vote was years in the future, Donald Trump and Boris Johnson had yet to trouble their respective administrations, and 2020 was something you used to describe eyesight. 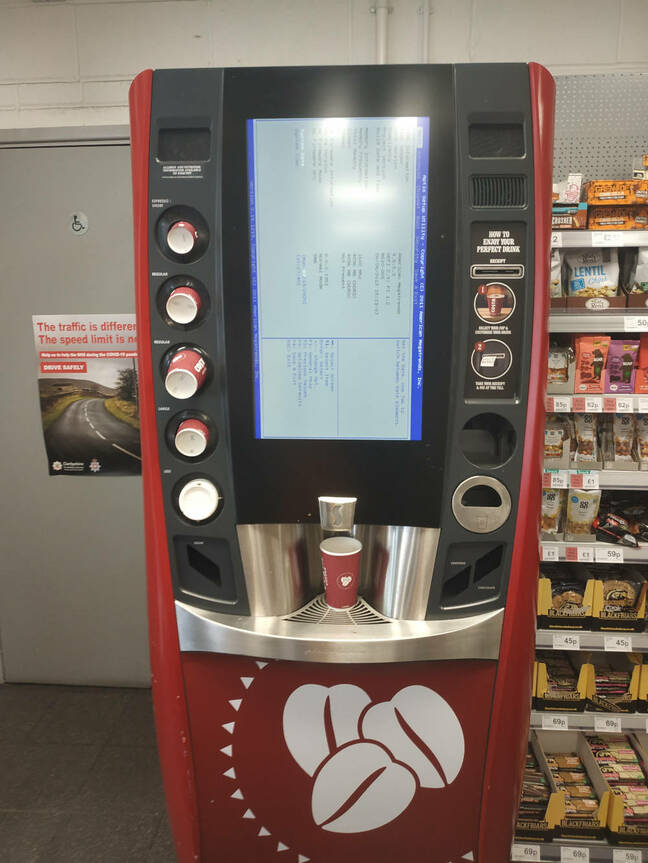 If only we could go back to those days.

Behold 2013, (6 June, to be precise) via the medium of the build date of the American Megatrends BIOS in a hopelessly borked vending machine.

We'd like to say that the date was set in coffee-based tribute to author Tom Sharpe, who died (aged 85) on that day, but we fear that American Megatrends had other things on its corporate mind when it spat out this particular variant of its firmware.

Not that a caffeine-crazed coffee chaser is likely to care about such things while attempting a futile prod of the screen and being rewarded with UEFI champions league levels of bork (we're here all week).

If a craving for caffeine has driven you to paw hopelessly at a Costa Coffee orifice, then a discussion on the relative merits of Wilt versus Porterhouse Blue is unlikely to be super high on your priority list.

Our reader snapped this distressed device back in July, so the idea of poking at the screen is even ickier than it might have been in previous years (although we're sure attentive staff keep it spick and span). However, a sideways BIOS bork indicates that no amount of prodding is likely to coax the poor thing back to life.

Sadly for thirsty and sleepy travellers, there will be no Regular, Large or Espresso / Shot dispensed. Just a steaming mug of bork and a reminder of simpler times. ®