Amazon Web Services remains the king of the clouds, at least when measured by revenue, according to analyst outfit Canalys.

The firm’s latest assessment of the worldwide cloud market, this time for Q3 2020, found total spending of $36.5 billion.

That’s up a neat $9bn compared to Q3 2019 and $2bn over last quarter’s results and represents collective year-on-year growth of 33 percent. The big four collectively swelled by 40 per cent.

Canalys ranked AWS as the clear leader with 32 percent revenue share. Azure’s 19 percent share, plus Google’s seven and Alibaba’s six, collectively match AWS. Canalys doesn’t bother breaking out the players in the remaining 37 percent of the market, which means IBM and Oracle have less than six percent share apiece, while minnows like OVH, Digital Ocean and Linode don’t make a dent. Nor are China’s other contenders – the likes of Tencent and Huawei – considered worthy of their own row on a spreadsheet. 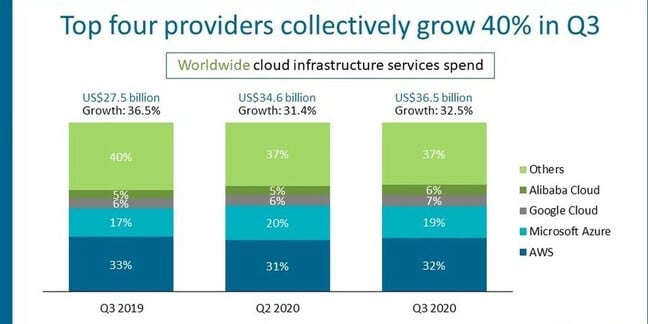 Canalys says that Microsoft can at least point to its market share growing two percent over the last year, thanks to what it feels is “an increase in long-term contracts, highlighting growing commitment among its larger customers as they migrate mission-critical workloads to Azure.”

Google did well off the back of increased partner engagement, while Alibaba topped the China market and was rated the Asia-Pacific region’s top player.

Canalys research analyst Blake Murray suggested happy days lie ahead for clouds, with the resumption of lockdowns across Europe increasing demand for cloud and emerging workloads like 5G increasing the size of the market.

But one colossal workload the big clouds probably won’t touch is running Facebook: on its Q3 earnings call today The Social Network™ advised that its capital expenditure for 2020 will come in at $16 billion, but in 2021 that will surge to between $21bn and $23bn “driven by investments in data centers, servers, network infrastructure, and office facilities.” Some of that spend was delayed due to the COVID-19 pandemic making it hard to work on building sites. ®