Remember when the keyboard was the computer? You can now relive those heady days with the Raspberry Pi 400

Blu Tack not included: The Reg pulls it apart, then puts it through its paces

Review Perhaps a little too early for a festive gift guide comes another official incarnation of the Raspberry Pi – this time built into a keyboard.

The Raspberry Pi 400 sees the return of the diminutive computer to its roots. Namely, that exciting moment when you unbox a new computer and then march over to occupy the household TV. 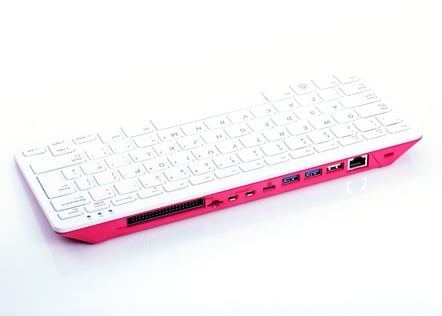 Sure, such shenanigans have always been possible with the Pi range since its 2012 launch, but the requirement of popping the board into a case and plugging in the requisite peripherals have never quite measured up to the simple joy of unboxing an Atari 400.

Enter the Pi 400. A Raspberry Pi 4 (with some tweaks) built into one of the company's keyboards.

The idea is not new. Fans have been putting the computer into a variety of cases from launch and it didn't take long after the arrival of the official keyboard before somebody attempted to cram a Pi into it (in this case, a Pi Zero).

The Pi 400 takes things one step further, popping what is effectively a 4GB Pi 4 into a slightly thicker keyboard case.

The processor is a marginally swifter variant of the Broadcom BCM2711 quad-core Cortex-A72 64-bit SoC found in the Pi 4, running at 1.8GHz instead of 1.5GHz. There is only one USB 2.0 port instead of the two on the vanilla Pi 4, although the two USB 3.0 ports have been carried over along with the micro HDMI ports. The MicroSD slot is also accessible and now spring-loaded, although the stereo and composite video port is absent.

As well as the gigabit Ethernet port, enthusiasts will be delighted to see the GPIO header also exposed at the rear of the case. "Perhaps we should ship a bit of Blu Tack for old times' sake," remarked Pi supremo Eben Upton, in a reference to the expansion packs of old.

For those who need to connect a HAT, Upton added that "a short female-to-male IDC expansion cable allows you to lay a HAT down flat, the right way up, behind the unit" and would be available from resellers at launch.

With plectrum and screwdriver in hand, we pulled our review model to pieces to see what was inside. 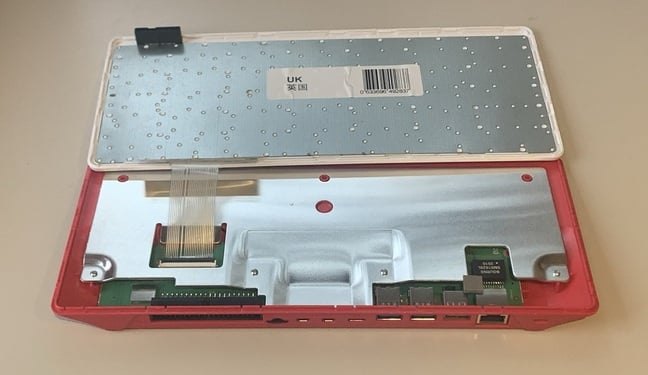 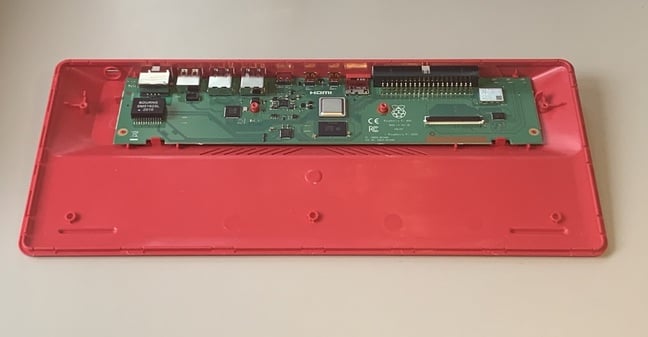 The answer? Not very much. Certainly none of the glue that seems to bedevil many computers today. Some cautious prodding removed the keyboard, and a mere four screws and a sticky pad on the processor was all stood between us and the PCB within.

The layout of the Pi 4 has been amended to fit the case, with the addition of a hulking aluminium heat spreader to keep things cool. The heat dispersal issues on the Pi 4 saw us fitting a fan to our original board. However, the Pi 400 does not seem to suffer as badly, and Upton challenged us to see how hot we could get it.

Luckily, Ubuntu 20.10 was released shortly after and, compared to Raspbian, the underside of the case did become warm to the touch in use, but not excessively so (and certainly not when compared to the original Pi 4.)

Otherwise the components are a cross between the Pi 4 (from which most of the Pi 400 is derived) and the Compute Module 4, which shares its radio module with the 400.

It seemed a bit of a wasted opportunity to not make the guts upgradable thanks to the new form factor of the Compute Module. Upton told us: "We did consider it, but ultimately at the volumes we're producing it in, it was more economical for us to produce a dedicated board."

The idea has been floating around Raspberry Towers for a few years now: "We actually had a Raspberry Pi 3-based prototype a couple of years ago," explained Upton, "but wanted to wait for the Raspberry Pi 4 platform to really do it justice."

We took it for a spin over the course of a few weeks, using it as a primary computer. It saw duty writing articles in LibreOffice, surfing in FireFox and Chromium, and the odd bit of Python. It performed admirably. We did, however, find the (non-backlit) keyboard had a slightly light and plasticky feel when compared to higher-end products, but forgave it considering the price point and the intended market.

"This is a consumer PC," said Upton, "built on Raspberry Pi technology, so its natural market is home and education."

He added: "We do think there's a business market here too, as an affordable integrated thin client, building on our established relationship with Citrix."

2021 commercial channel plans aside, the whole thing put us in mind of an Acorn Electron, or maybe that ZX Spectrum proudly on show in UK retailer WHSmith back in the 1980s.

The price is within reach: the Pi-400 can be had for $70 (plus taxes) - although we'd spring for the extra and go for the $100 pack with power supply, mouse, HDMI cable, ready-to-go 16GB MicroSD card, and beginner's guide if there's a space under the Christmas tree.

Upton told us UK punters can expect to pay just under £70 including VAT for the unit by itself and £100 for the complete kit.

That $100 compares favourably with the $120 one can expect to pay for an official 4GB Pi desktop kit, although not so well with the $55 4GB Pi for those who already have the requisite components.

And while the chippery within the Pi 400 ticks over at 1.8GHz, only a 4GB edition is available; fine for Raspbian, but Ubuntu 20.10 Desktop started to get a bit unhappy as we loaded it with apps. Upton told us extra memory would depend on the market feedback. He added that the 8GB Pi had been a sales success in its own right, "getting on for half a million units sold already."

Apart from memory, there are some other annoyances with the Pi 400. No physical power or reset button remains a perennial Pi pain, although jiggling the USB power lead for a reset is highly reminiscent of home computing days of old (although one can hit fn+F10 to trigger a shutdown in Raspbian if one wants.)

Our review model also featured status lights for the likes of the caps lock, although one labelled for power actually doubled as the disk access light, which flickered as the Pi 400 hit the SD card. Upton admitted: "It seemed like a good idea at the time," but we weren't alone in finding it a bit odd. It should be dealt with in time for launch.

More annoying, certainly for anyone opening the computer-only model on Christmas day, are the micro HDMI ports inherited from the Pi 4. We can imagine the panicked hunt for the cable when little Jenny or Johnny wants to plug the new $70 toy into the TV.

There are sadly no plans to bring back the full-sized connector, as Upton explained: "We're happy with the micro HDMI connector form factor, and there would be no way to support dual display with full-size connectors."

We'd have to repeat our recommendation to spend a bit more and go for the full $100 kit unless you know you have the requisite peripherals and cables to hand.

Also vaguely irritating, considering the market this is aimed at, is the lack of a dedicated mic or headphone jack. The Raspberry Pi team expects customers to use a USB device if needed. Upton noted: "We didn't have a good solution for microphone input, and this felt like the most modern standards-based way to do things."

Finally, while this is pretty much a Pi 4, there are some differences in the firmware that could catch some distributions out. While Raspbian and Ubuntu 20.10 Desktop (and 20.04 for that matter) ran well in our testing, others had a bit of a whinge on startup. We'd expect the wrinkles to be swiftly ironed out by the community, but be prepared for a possible hiccup or two if one simply sticks one's carefully crafted Pi 4 SD card into the Pi 400.

Putting the niggles to one side, it is hard not to like this new form factor for the Pi 4. Sticking the Pi into a keyboard at the Wales factory opens up some intriguing possibilities for tinkerer and amateur alike. We can imagine it cropping up on the shelves of UK retailers, and the $100 pack removes much of the shock of the DIY nature of the original board, which might otherwise have put some off.

Upton told us that the "400" moniker had been selected to ape the numbering scheme of home computers of old, so in a possible Pi 500 follow-up we'd like to see more RAM, a Compute Module-based upgrade path and maybe a trackpad and built-in battery. To be fair, for the latter two requests Upton pointed out that the Pi 400 "is a desktop, rather than mobile, product." At least this time around.

English (US and UK), French, Italian, German, and Spanish versions are available at launch (replete with translated beginners guides) with Sweden, Norway, Denmark, Portugal, and Japan following. As for other localisations: "Hebrew's up there, as are some Eastern European languages," said Upton.

Upton said it was unfortunate that the Pi 400 missed the start of the first lockdown: "Ultimately this is about doubling down on our vision of delivering affordable, powerful, programmable, general-purpose computers to the world."

Some might take issue with the "affordable" bit, compared to the price of a bare-bones Raspberry Pi. However, once one considers all the bits that come in that $100 box, the proposition becomes rather attractive.

And a good deal cheaper than sating the little darlings' desire for tech with something branded Sony, Microsoft, or Nintendo over the festive period. ®