A fast radio burst, a mysterious type of powerful electromagnetic energy poorly understood by scientists, has been spotted in our own galaxy for the first time. It's been traced to a magnetar, an exotic form of neutron star with an incredibly strong magnetic field.

Fast radio bursts (FRBs) are usually extragalactic radio signals lasting just a fraction of a second, and have baffled scientists since they were discovered in 2007. Now multiple telescopes have detected the first FRB within our Milky Way galaxy.

The close proximity of the outburst made it easy to track down its source, and two separate teams of astrophysicists fingered a magnetar codenamed SGR 1935+2154. 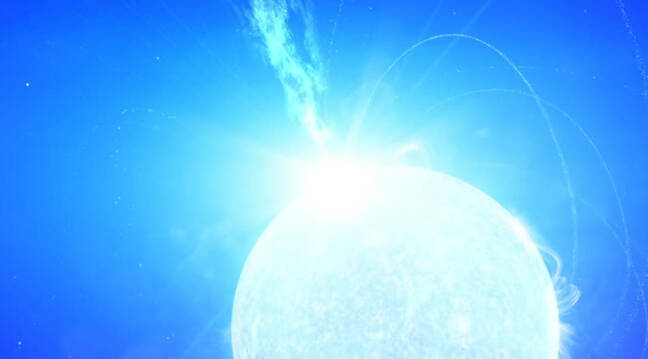 A NASA Goddard illustration of the fast radio burst

“There’s this great mystery as to what would produce these great outbursts of energy, which until now we’ve seen coming from halfway across the universe,” said Kiyoshi Masui, co-author of one of the studies published in Nature this week about the FRB, and an assistant professor of physics at MIT.

“This is the first time we’ve been able to tie one of these exotic fast radio bursts to a single astrophysical object.”

In late April, SGR 1935 started behaving oddly. It launched a firework display of X-rays, repeatedly shooting out beams over hours. The event was captured by various spacecraft and instruments in orbit, including NASA’s Swift satellite, the Fermi Gamma-ray telescope, and the Neutron star Interior Composition Explorer installed atop the International Space Station.

Around 13 hours after the storm died down, SGR let off another pulse of X-ray energy along with a fast radio burst that lasted just a thousandth of a second. Observatories, such as the ground-based Canadian Hydrogen Intensity Mapping Experiment (CHIME) and STARE2, an array of radio antennas spread across the US West Coast, detected the short blip.

Here’s a handy video from NASA explaining the whole shebang:

“The radio burst was far brighter than anything we had seen before, so we immediately knew it was an exciting event,” said Paul Scholz, an astronomy and astrophysics researcher at the University of Toronto, who is part of the CHIME/FRB Collaboration.

A second study was also published in Nature.

It’s been tricky to figure out the exact distance to SGR 1935. Located in the Vulpecula constellation, it’s estimated to be somewhere from 14,000 to 41,000 light-years away from our planet. If it is, indeed, in the closer range to Earth, scientists reckon the total X-ray energy generated during its outburst is equivalent to the same amount of energy produced by the Sun over a month.

“We've studied magnetars in our galaxy for decades, while FRBs are an extragalactic phenomenon whose origins have been a mystery. This event shows that the two phenomena are likely connected,” Scholz added.

Scientists have speculated that FRBs come from objects like magnetars for a while, though it’s possible that other previous measurements were generated by things like supermassive black holes. Both teams will continue picking apart the signals from SGR 1935 in an attempt to crack the puzzle of physics behind the creation of FRBs.

“It’s been doing interesting things, and we’re trying to piece together what it all means. We’ve got our eyes open for other magnetars, but the big thing now is to study this one source and really drill down to see what it tells us about how FRBs are made,” Masui concluded. ®