Still not as fast as an old Pendolino

Updated Virgin Hyperboleloop was cock-a-hoop over the weekend after blasting a pair of employees along its Las Vegas test tube.

"Blast" might be an exaggeration since the duo only reached 172kmph (107mph) on their 15-second, 500-metre journey. A far cry from the 670mph (1078kph) to which the company lays claim – although with only half a kilometre of tube to play with, one wouldn't want to get too excessive with the speed.

It is the first time humans have been loaded into the system (following 400 tests free of fleshbags) and a demonstration of the progress made over the last six years. The staffers in the two-seater XP-2 were Josh Giegel, co-founder and chief technology officer, and Sara Luchian, director of passenger experience. Luchian noted that the experience was "not at all like a roller-coaster" and that neither passenger required the services of a sick bag. 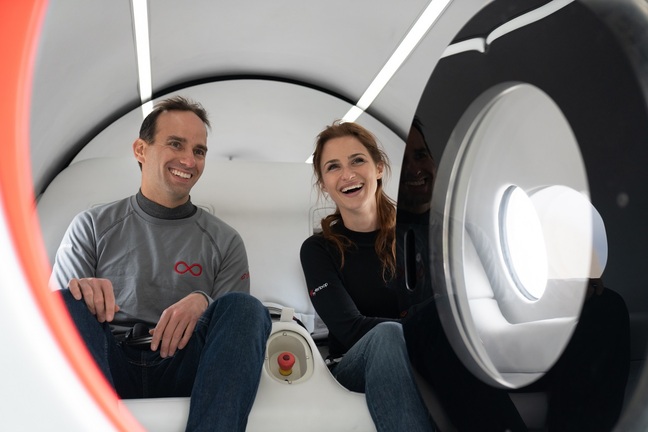 The production version of the hyperloop vehicle will carry 28 passengers.

The weekend's activities have been a while coming. 2016 saw a test vehicle crack 100mph for the first time, although it did not use the vacuum tubes that are a cornerstone of the technology. The dream, after all, is to send electromagnetically levitated pods along low-pressure tubes, where air resistance will be minimal.

While promoters of the technology point to the airline-like speeds possible and the reduction in travel time compared to traditional ground-based transport, there are several technological hurdles to overcome. These include the sheer logistical challenge of constructing a network of vacuum tubes above or below the ground as well as the potential G-forces that might be experienced by passengers during acceleration and deceleration.

Then there is the concern that things won't end well for the system's occupants should anything go wrong.

"I can't tell you how often I get asked 'is hyperloop safe?,'" said Jay Walder, CEO of Virgin Hyperloop before insisting the company had a "thoughtful approach" to safety, validated by a third party.

We fear that popping a pair of staffers into a pod and sending them hurtling along a 500-metre vacuum tube won't make those questions go away any time soon. ®

While Virgin Hyperloop's DevLoop test site is 500 metres, the company told The Register that the total distance travelled (at a top speed of 48.07m/s) was 395 metres. The tube itself was depressurised down to 100 pascal.