[Checks meeting agenda...] Where does it say 'Talk cr*p and waste everyone's time'?

Something for the Weekend, Sir? I am going to expose myself.

My apologies to those who may be jolted by my sudden shock tactics. As a regular reader, you understand how out of character it is for me to draw attention to myself. Normally I would shy away from such a thing as revealing all and laying it on the table. But now is the time to drop the drapes and stand proud before you.

What’s that, you say? A disappointment? Sorry, this has not happened to me before. Can we try again later?

Well, I dunno, what did you expect? All I promised was that I’d enable my webcam. It’s not as if I was going to be stark bollock naked or something. Ha ha… oh I see, we might have been at cross-purposes: you thought I was threatening to Telegraph-Todge, WhatsApp-Wang or, er, Slack-the-Schlong?* Oh, you guys! Me, Messenger-my-Manhood? Skype-a-Pipe? Threema-the-Weiner? That’s definitely not my jam.

Much of my working day is occupied with online calls. Except we don’t call them calls any more: we call them "meetings", even if it’s a three-minute chat with your mater on Sundays to make sure she’s still alive and hasn’t rewritten her will in favour of the cat.

There was a time when I would spend a typical day on the blower, then writing up articles from the notes I took. Hey, there was a time when I spent most of my working days yelling threats of violence at laser drum scanners and rocking back and forth muttering “Come on, come on” next to a Linotron while a motorbike courier at the door would try to catch my eye so he could theatrically look at his watch again, but that’s another story.

Now it’s all online "meetings". And I was taken by surprise this week when a colleague asked this question in a private forum for tech media types: Do you join a meeting with your webcam switched on or off?

Off, obviously. Or so I thought. I subsequently learnt from the discussion thread that plenty of journos and PR types launch themselves head-first into the collaborative online abyss with camera enabled. If this is a common thing, it helps explain why I see so many disheveled people in group meetings (AKA "meetings" as opposed to "online calls").

If indeed it is a common thing, it makes you wonder if they habitually expose themselves in everyday life as well. Do they throw open the bedroom curtains at the front of the house while still naked? Do they answer the postman at the door while wearing a string vest and, er, a string? Do they stumble into the supermarket still wearing that bunny onesie and absurdly blurt out: “Oh, sorry for my appearance! I had no idea!”

If other people really want to look at me during a phone call, or a proper meeting for that matter, I’d rather have a robot Dabbsy in my place. Robot Dabbsy will nod, and look at the camera and blink and yawn and roll its eyes at every dopey thing he hears – just like the real thing, in fact!

Surely the humans who choose "webcam-on" at the beginning of their meetings have not seen the movie Snowden otherwise they’d know they don’t have to bother. I take the assumption that my webcam is always switched on; the little LED just lights up during video calls to make me happy, otherwise it’s probably looking at me all the time. That is, it would be if I hadn’t unplugged it. 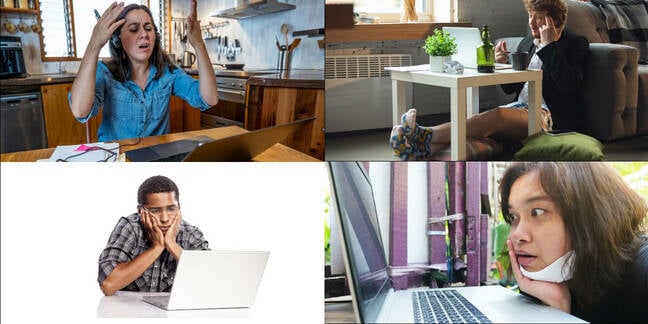 For me, entering an online meeting with my webcam enabled is more than an On/Off choice: it involves crawling on the floor (where I keep my laptop, clamshell closed, of course) and plugging in the external webcam that’s perched on top of one of my displays and held in place with Blu-tak. It’s not something I can do accidentally.

As for the built-in cam on my laptop? I’ve taped over it, and not just for reasons of paranoia. I found that if the clamshell is open, regardless of what other displays and devices are attached, all video conferencing apps try to use my built-in webcam as the default, without asking. And since the laptop usually sits on the floor at my feet, conference participants would get a 10-second live stream of my crotch before I could scramble to the video mute button.

As for "meetings" via smartphone, I never enable the video. Sometimes my caller enables his or hers, which prompts the app to ask me if I want to do the same. Obviously I can’t see this as I’m holding it to my ear, and unfortunately my ear is as capacitive as any other appendage. My inquisitive caller gets to see a macro view of my outer ear canal. Well, it’s their life choice, I suppose.

Anyway, I’m in a meeting right now, hidden as usual behind a stern-looking photo not unlike the one at the bottom of this page. But I can hold back no longer. As I announced at the top of this page, I must expose myself!

It’s a meeting of prerelease beta testers for an unnamed piece of software. That is, it has a name – it’s not just empty space under the app icon – but I signed an NDA and they’d send the dogs round if I uttered its name without consulting a rabbi first.

The meeting has an agenda. The dev team in India introduce themselves, then they demonstrate the new features, then they answer questions on what we’ve seen. Then it ends.

We’re at question time and one of my testing colleagues has taken the invitation to ask questions a little too literally. He is asking questions about anything that pops into his head, none of which have anything to do with the software demo we’ve just watched.

And so he carries on. This meeting should have finished half an hour ago and we’re stuck listening to this bollocks. Undeterred by the audible sighs and harrumphing we can all hear from fellow meeting participants, he starts typing into the chat window: Come on, everyone, ask some questions! It shouldn’t be just me!

Except it is just you. On and on. I was about to type back in the chat window something along the lines of Agendas exist for a reason you boring blowhard but decide to expose myself instead and stare him down by looking directly into the camera and grinning weirdly like that prison footage of Charlie M.

I click on the red camcorder button and begin staring.

Within a few seconds, other participants are switching on their webcams. Some are miming yawns with dramatic hand gestures to their mouths; others stretching like cats; several are almost certainly playing games on their smartphones; one has put his feet up on the desk in front of the webcam so we can't see him, only between socks.

Blabbermouth doesn’t get the hint and carries on. Only when the otherwise irreproachably polite Indian team leader cracks – having answered the same question four times, using the same words – and announces the abrupt and immediate end of the meeting, does BM stop talking. And even that was only because we all got booted out at the same time. Perhaps he’s still talking right now…

Alistair Dabbs is a freelance technology tart, juggling tech journalism, training and digital publishing. He has found another advantage of disabling the webcam during a meeting: it means you can stop listening to the time-wasting stream-of-arseishness from fellow participants and attend another meeting before the first one has finished, using another device. He says this will get easier once Disney finishes his robot. More at Autosave is for Wimps and @alidabbs.

* I have since been informed the correct expression is ‘dick-pic’.