The Arecibo Observatory instrument, located in a national forest in Puerto Rico, was the largest radio telescope of its kind in the world until 2016 when the Chinese built a bigger one. Now the US installation's future hangs in the balance as engineers attempt to reinforce the structure after one of the cables holding up the overhead platform fell away and tore a 100-ft-long gash in the telescope’s dish below.

Last week, the telescope was damaged yet again when a cable holding the structure above the instrument gave way and came crashing down.

Some of the wires in the platform's remaining cables are already fraying, and if they snap, the structure holding the telescope’s receiver will come tumbling down with disastrous results, according to the University of Central Florida, which operates the observatory. 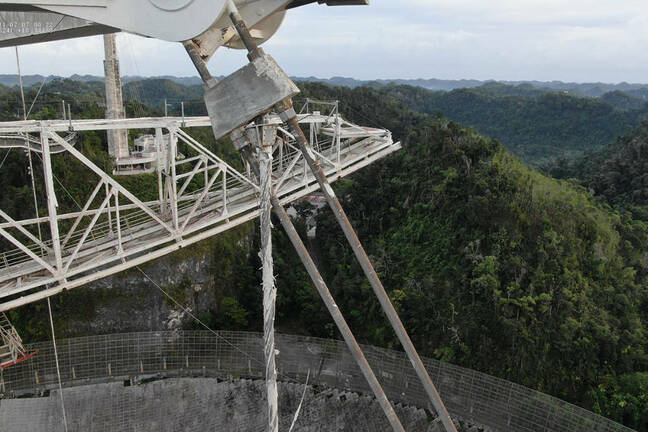 A view of the platform suspended over the telescope's dish ... Source: UCF. Click to enlarge

“The engineering firms cannot verify the integrity of the other cables at this time supporting the 900-ton platform,” the college said in a statement. “Each of the structure’s remaining cables is now supporting more weight than before, increasing the likelihood of another cable failure, which would likely result in the collapse of the entire structure.

“Other wire breaks on two of the remaining main cables have also been observed. The situation is dynamic and poses a serious safety risk to employees and contractors. As a result, project leaders are not only working vigorously to understand why this industrial failure occurred, but also to share these findings in a timely and transparent manner with the [National Science Foundation] and all interested parties.”

An official investigation into what caused the cables to break away was launched in August, and the observatory has been closed since. Three engineering firms have been hired to probe the structure, and a socket holding a auxiliary cable was shipped off to NASA's Kennedy Space Center for forensic analysis. ®

Who, Me? In the age of tractor-fed printers and perforated paper, telling a junior to tear it up was close to negligence
On-Prem6 Feb 2023 | 18

Dear government, this thing is written by volunteers. Take it up with them. Also: shouldn't you know this already ?
Personal Tech6 Feb 2023 | 11