Watch as we effortlessly segue from BSODs to hovertrains

Bork!Bork!Bork! It is tech mirroring life in today's edition of Bork as the text-based BSOD of yore is replaced by… the Sad Face of 2020.

Microsoft has committed many sins over the years. We understand* that the entire team responsible for the Windows 10 October 2018 Update were made to use the software for a week until they said they were sorry and that it wouldn't happen again.

Then there was the ill-judged Windows Millennium Edition (not to be confused with the Millennial Edition and its avocado toast screensaver and desktop that is rented by the second from an avaricious landlord).

No, the most egregious sin is the apparent replacement of the text mode Blue Screen of Death with the altogether fluffier Sad Face of Borkage. 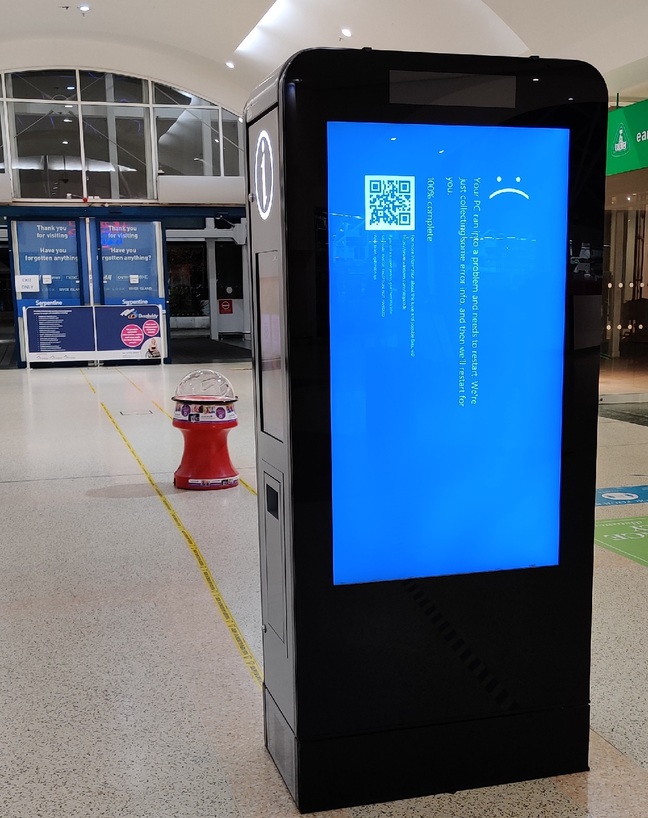 Spotted by Register reader Phil during a (pre-lockdown) November jaunt to a shopping centre in the fine UK city of Peterborough, the Windows-based signage is having a bad time. Having made it thus far through 2020, we can sympathise.

While not the BSOD we've come to know and fear over the years, the KMODE EXCEPTION NOT HANDLED is likely caused by an iffy driver stomping over places Windows would prefer it didn't. It also means that the screens of this information kiosk are very much out of action.

Should we be fortunate enough to visit Peterborough in the near future, we'd skip the shopping centre in favour of the pre-BSOD delights to be found at Railworld. We are, of course, referring to the RTV-31 stored there.

A relic from the days before Microsoft's finest squatted atop the world's PCs, the RTV-31 was a hovertrain (or Tracked Hovercraft) that engineers dreamed might barrel along at speeds in excess of 200mph above its single monorail-esque track. Sadly cancelled in 1973, the research has cropped up in other maglev projects over the years.

One day we might feel the same about a proper, fully text-mode Blue Screen of Death.

* Microsoft didn't really inflict this punishment on employees that pumped out the ill-fated October Update.