Astronomers have revived a decade-old idea that was abandoned by NASA: a 100-metre-wide liquid-mirror telescope on the Moon to study the stars.

Specifically, the academics, based at the University of Texas at Austin, propose erecting the instrument – dubbed the Ultimately Large Telescope (ULT) – at a lunar pole to collect light from stars that existed before galaxies had even formed. The mirror could be made of a liquid salt, which would remain fluid in the cold environment, and would be easier and cheaper to transport to the Moon than glass. The mirror would also have a reflective layer of silver.

"The mirror base would be made out of a liquid that does not freeze at -145°C, or -225°F, corresponding to the temperature of the Moon," NASA Hubble Fellow Anna Schauer, who led the proposal work, told The Register. "Previous experiments in 2008 found ionic liquids, or 'liquid salts,' to be the best candidates. The layer of silver coated on the mirror would be very thin, only a few tens of nanometres thick."

"Any extra-terrestrial telescope would be expensive," she added. "The liquid mirror technology promises significant savings, compared to the standard architecture of big telescopes based on solid structures, perhaps reducing cost by a factor of ten, or so. In rough numbers, an approximate estimate is a few hundred million dollars. The final price tag will also depend on the other infrastructure that might exist on the Moon by then, such as the planned Artemis permanent lunar base." 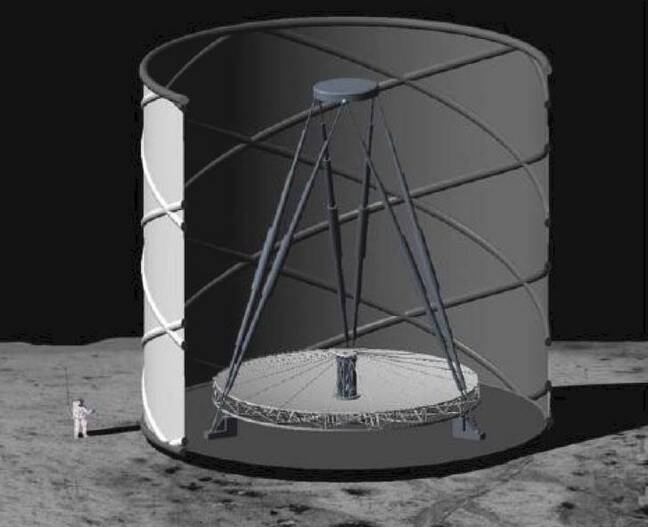 The proposed star scanner on the Moon ... astronaut for scale. Source: Roger Angel et al./Univ. of Arizona. Click to enlarge

The instrument would study the first suns born in the universe some 13 billion years ago. Classed as Population III stars, they’re massive: at least 300 to 1000 times more massive than our Sun. These ancient objects are difficult to study, though; their light is faint and redshifted. Today's telescopes are incapable of studying these faraway stars, and you'll need something on the Moon like the ULT to get a better look at them, the university team argued in a paper proposing their design, which is to be published in the upcoming issue of The Astrophysical Journal [preprint version].

“The launch of the James Webb Space Telescope will open up a new window for observations at the highest redshifts," the paper stated. "However, even with this new facility, the first stars will remain out of reach, as they are born in small minihalos with luminosities too faint to be detected even by the longest exposure times.

"In this paper, we investigate the basic properties of the Ultimately Large Telescope, a facility that can detect Population III star formation regions at high redshift. Observations will take place in the near-infrared and therefore a Moon-based facility is proposed."

The mirror must spin continuously to keep its shape, and it would operate autonomously, powered by solar energy, and relay its scans of the heavens to Earth via satellite. NASA toyed with a similar idea in 2008, though it never came to fruition. "We are putting this idea out to the scientific community and hope to revive the discussion about it," Schauer said.

“We live in a universe of stars,” added Volker Bromm, co-author of the paper and an astronomy professor at UT Austin. “It is a key question how star formation got going early in cosmic history. The emergence of the first stars marks a crucial transition in the history of the universe, when the primordial conditions set by the Big Bang gave way to an ever-increasing cosmic complexity, eventually bringing life to planets, life, and intelligent beings like us.

“This moment of first light lies beyond the capabilities of current or near-future telescopes. It is therefore important to think about the ‘ultimate’ telescope, one that is capable of directly observing those elusive first stars at the edge of time.”

In other Moon-related news: HPE is expanding the processing power of NASA’s Aitken supercomputer, which is being used to simulate rockets during liftoff for NASA’s Artemis mission – an ambitious effort to send the first woman and next man to the Moon by 2024.

The super was built using Intel Xeon Scalable parts, and it has a peak performance of 3.68 petaFLOPS. Now HPE is adding 7,742 AMD Epyc microprocessors, allowing it to reach 4.72 petaFLOPS, we’re told. The upgraded machine will be ready for use in January 2021. ®