A man accused of stealing $35m from victims of a convoluted algorithm-based Ponzi scheme was collared by FBI agents after he tried to flee using a submersible scooter in a frigid lake.

Matthew Piercey, 44, of Palo Cedro, California, was arrested on Monday after he was charged with 31 felony counts, including wire fraud, mail fraud, attempted witness tampering, and money laundering, according to prosecutors.

He took an unusual route to court.

When the FBI swooped this week to nab him, Piercey managed to get away and sped through residential streets and onto a highway in his truck, heading toward California's Lake Shasta, we're told [PDF]. Agents raced after him in vehicles and a helicopter. Piercey eventually abandoned his ride, and jumped into the cold lake on a Yamaha 350LI, an underwater scooter capable of cruising at a top speed of 3.7 miles per hour. 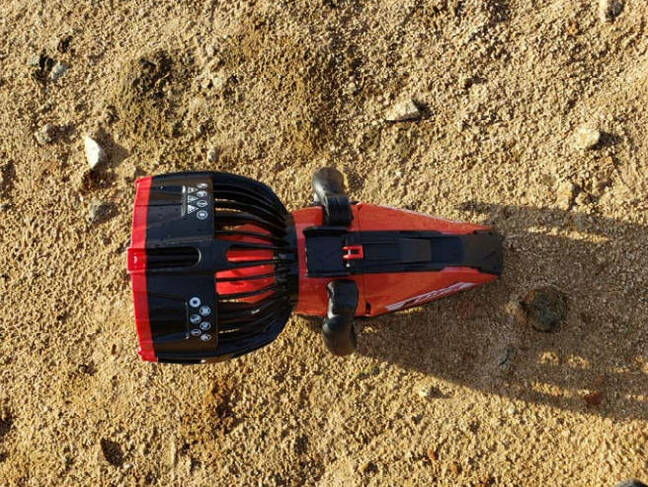 Not a great plan ... The underwater scooter ... Source: FBI. Click to enlarge

He disappeared out of sight, and left a trail of bubbles that was easy to spot, agents said. After 25 minutes below water, presumably using some kind of breathing equipment, he finally emerged, and was promptly arrested by the patiently waiting Feds. His wife gave the agents a change of clothes for him to put on.

The indictment [PDF] against Piercey, filed in a US federal district court in eastern California, claims he ran a five-year Ponzi scheme that swindled investors out of $35m. With an accomplice, Kenneth Winton, he set up two companies: Family Wealth Legacy LLC and Zolla Financial LLC, the Feds alleged. The duo used these operations to persuade several investors that their funds would be used in algorithmic financial trading, and that they would get their money back with profit, we're told. Instead, the pair spent the money on things like credit card expenses, a boat, and houses, it is claimed.

When investors asked for their money back, the duo allegedly wheeled out a string of lies to delay coughing up the dosh. Piercey would also pay early investors with money obtained from new customers, it is claimed: a classic Ponzi scheme. He even lied to his investors when he was subpoenaed, and said he was being investigated “due to his outreach to the President with a bold proposal to rescue the country’s banking system,” it is claimed.

“Beginning in or about July 2015, and continuing until at least in or about August 2020, the defendant Matthew Piercey, Kenneth Winton, and others known and unknown to the Grand Jury knowingly devised, intended to devise, and participated in a material scheme and artifice to defraud and obtain money by means of materially false and fraudulent pretenses, representations, promises, half-truths, and omissions, and the concealment of material facts,” the prosecution's court filings stated.

Now, Piercey has been detained and is considered a “serious flight risk,” although possibly not an underwater one. Winton has also been charged with conspiracy to commit wire fraud and is expected to attend a court hearing on Thursday.

The pair will have to forfeit their property and pay back the millions they owe, if any is left, as well as face up to 20 years in prison, if convicted. ®

Bullet-proof hosting? Can't help you there. Will you settle for rapid repairs?
Networks1 Feb 2022 | 52

California backs Proposition 22: Great news for Uber, Lyft as their drivers can work as indie contractors