Plus: Lots of dead space in the new Mac Mini

The first teardowns of the MacBook Pro and Air reveal few surprises. iFixit got its hands on the inaugural Apple Silicon machines and tenderly disassembled them, with the results largely affirming what we learned during this month's keynote.

The most interesting findings pertain to the cooling apparatus on both machines. The MacBook Air is bestowed with an entirely new passive thermal management system, which consists of an aluminium heat spreader that pushes warmth generated from the machine's M1 chip to the external fan grille.

As previously mentioned, this isn't exactly new territory for Apple, which had used passive thermal methods on the 2015-era MacBook and the ill-fated G4 Cube. Both of those machines were fundamentally different to this, however. The MacBook came with underpowered Core M3 and M5 chips, and prioritised the svelte form factor over performance. Meanwhile, the G4 Cube was designed to provide enough airflow to allow for passive thermal dissipation. 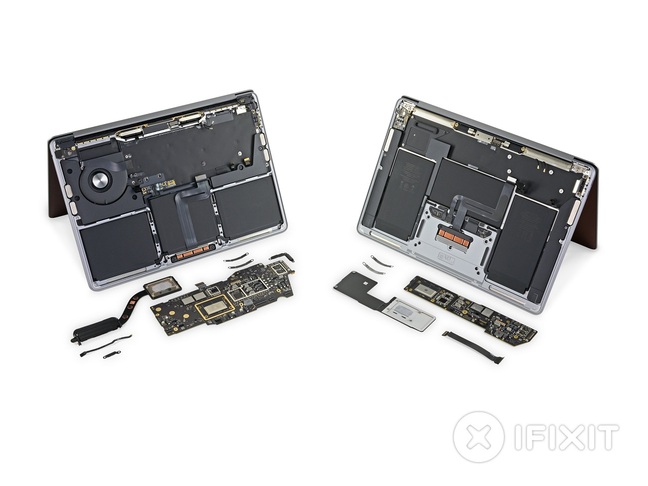 The difference here is the positioning. During the keynote, Apple deliberately hyped up the MacBook Air's gaming and audiovisual production abilities. These are demanding tasks that promise to heat any processor up. The absence of a fan, therefore, is striking.

Despite shipping with a virtually identical processor, the 13-inch MacBook Pro comes with a fan. This is, in fact, the exact same fan as used on the final Intel-powered MacBook Pro, which iFixit pointed out demonstrates the different lineages between both machines. And both approaches have their own advantages and disadvantages.

The MacBook Air is a fully solid-state machine. The absence of any moving parts means there's less that could potentially break. The only maintenance you'll likely have to perform is a fresh blob of thermal paste every few years.

The fan in the MacBook Pro should allow the machine to perform more computationally challenging tasks for longer periods without experiencing any thermal throttling. The trade-off is that it typically requires a fair bit of power to sustain. Fortunately, the Pro comes with a physically larger battery than that used on the MacBook Air, which will compensate.

The rest of the machine's circuitry is all fairly par for the course. As with previous generations, you can forget about repairability. The storage and RAM is soldered directly onto the logic board. While it was previously possible (although insanely challenging, and not really worth it) for those skilled enough to replace the RAM, Apple's new unified memory architecture makes this vastly harder as it sits on the processor package itself.

Unlike previous machines, the latest M1 silicon laptops don't carry Apple's much-maligned T2 co-processor, which handles things like encryption and key management. This task is delegated to the Secure Enclave component on the processor.

Due to the preliminary nature of the teardown, iFixit did not provide either laptop with a "repairability score". While this is almost certainly going to be low single digits, due to the soldered RAM and storage, there are other factors that influence this – like the ease in which one can replace the laptop's battery, display, and keyboard.

Recent Apple designs have made even the most basic repairs difficult, with batteries affixed with glue rather than screws, and keyboards riveted – not screwed – in place.

While iFixit didn't get around to poking inside the new Mac Mini, a recent disassembly video from Canadian YouTuber Linus Sebastian shows the machine has been fundamentally redesigned.

Gone is user-replaceable RAM. The Mac Mini was among the last holdouts of upgradablity in Apple's consumer computer lineup, and this will likely disappoint many. The previous Intel generation could support up to 64GB RAM, and accepted standard DDR4 SODIMMs. The Apple Silicon flavor is limited to 16GB, with the memory chips sitting on the processor's package, as is the case with the MacBook Pro and Air.

Curiously, because the logic board is so small, the machine is filled with dead space. Apple could have conceivably shrunk the form factor without having to make any real hardware compromises. This opens the possibility for a more ambitious redesign further down the line. ®