The launch window opens at 20:00 UTC and follows the country's successful Chang'e 4 mission, which saw a soft landing on the far side of the Moon and the Yutu-2 trundlebot make its way across the lunar surface.

While Yutu-2 may still be on the Moon, the plan for Chang'e 5 is to land and collect approximately 2kg of samples which will be returned to Earth via an ascent module. It will be the first chunk of Moon returned since the Soviet Union's Luna 24 of 1976.

While Luna 24 managed to fire less than 200g of regolith back to Earth, NASA collected far more via the Apollo missions, which ended in 1972.

Chang'e 5 is the sixth mission of the program and, according to China's space agency, "will be one of the most difficult and challenging endeavors China has ever embarked on." Indeed, unlike Luna 24, China has adopted an approach that will trigger a sense of déjà vu among Apollo fanciers.

Weighing in at 8.2 metric tonnes, the Chang'e 5 spacecraft is composed of four components: an orbiter, lander, ascent module, and return capsule. Upon arrival at the Moon, the spacecraft will split into two parts. The orbiter and return capsule will remain in lunar orbit while the lander and ascent module make a soft landing on the surface in a massive lava plain known as Oceanus Procellarum, or "Ocean of Storms."

While not a rover, the lander will scrape up surface soil using a mechanical arm and, excitingly, use a drill to retrieve underground samples from as far down as two metres.

The samples will then travel to lunar orbit aboard the ascent module, which will dock with the return capsule. The precious bits of Moon will be transferred to this return module which will carry them back to Earth.

It is all terribly complicated but, if successful, the mission would make China the third nation to return a sample from the Moon to the Earth.

Those expecting the lander to enjoy a life as long as Yutu-2 are in for disappointment. The lander is designed to operate for a single lunar day, making the timing of the launch critical. A return to Earth is expected in mid-December, with the capsule landing in the Siziwang Banner grassland of the autonomous region of Inner Mongolia in China. 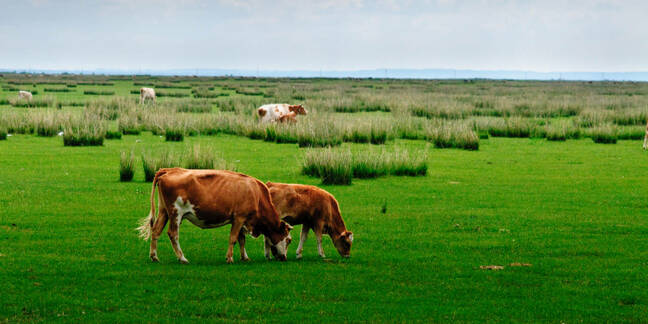 Cattle graze in the vast grasslands of Inner Mongolia

The design of the reentry system has already been checked out by Chang'e 5-T1, which was launched in 2014.

Should things go well, plans are afoot for crewed missions and a sample return from Mars. ®