Poll The Utah Department of Public Safety has found a mysterious metal monolith in a remote corner of the state.

The department's staff were conducting an aerial survey of bighorn sheep in the state's southeast, a region known as "red rock country" for reasons that should be obvious when you behold the image below depicting the monolith.

The announcement of the find said the monolith was "installed" but officials could find "no obvious indication of who might have put the monolith there."

An update added the following comment from the Utah Bureau of Land Management:

Although we can't comment on active investigations, the Bureau would like to remind public land visitors that using, occupying, or developing the public lands or their resources without a required authorization is illegal, no matter what planet you are from. 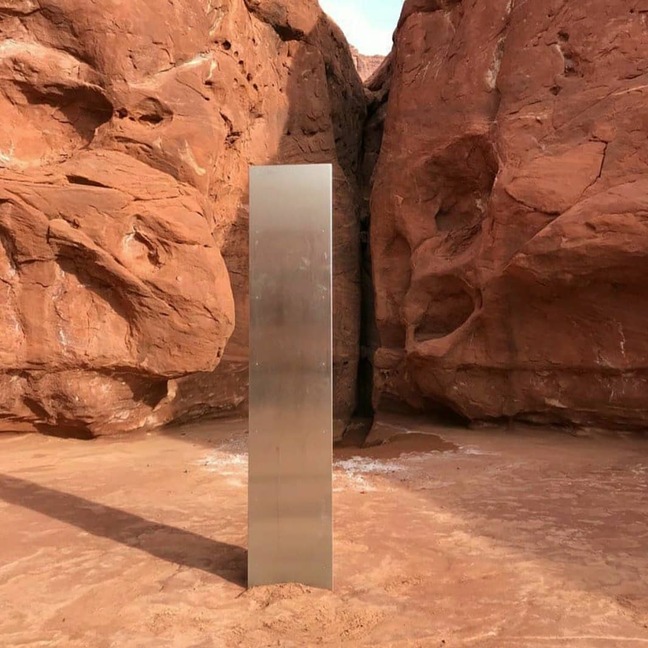 The off-planet mention is of course a reference to seminal sci-fi flick 2001: A Space Odyssey, which opens with aliens installing monoliths on Earth to guide our evolution to... given the film's opaque ending it's hard to say just what.

While the department has not detailed this monolith's dimensions, it appears not to have copied the 1:4:9 ratio used in the film and its sequels. Indeed, it appears it may be triangular.

In videos on the announcement page, staff suggested it is pointed at a crack in the rocks and surmise the position may be deliberate.

Zooming in on the snaps of the monolith leads your humble hack to suggest it is stainless steel, and quite new as it seems to compare quite well with his two-year-old barbeque that he is often too lazy to cover. The monolith appears to have been placed into dirt, rather than somehow slotted into rock, and to have been installed sufficiently long ago that signs of digging have dissipated.

We can't offer a better analysis because the department won't reveal its location "since it is in a very remote area and if individuals were to attempt to visit the area, there is a significant possibility they may become stranded and require rescue." Even those who know where it is are being told not to visit "due to road conditions."

Which is just what you'd expect the authorities to say if they wanted to hide the true nature of this monolith.

This is where you come in, dear reader. Share your theory about the monolith in our poll or the comments. ®

Please Enable JavaScript to use this feature.
Corrections Send us news
184 Comments