You didn't want fries with that, did you?

Bork!Bork!Bork! Welcome to another in our series of digital signage behaving poorly. Today, the revelation through the medium of Windows that "chips" is, of course, the correct word for delicious bits of fried potato.

There's a saying in the Bork office, located deep within the bowels of Vulture Central: "It's not McDonald's. It can't be McDonald's…"

Today is no exception, as the patty pusher reveals that lurking at its heart is not a large portion of fries, but a generous helping of borked CHIPS. 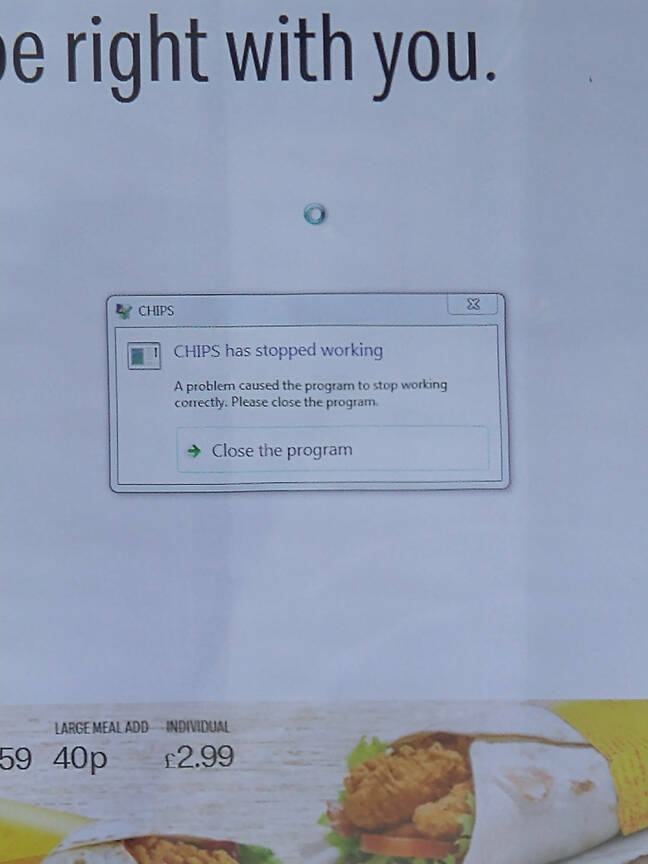 Spotted by Register reader Jamie at the McDonald's drive-thru in Preston, Lancashire back in October, the optimism of a promise that someone would be "right with you" is belied by what looks all the world to us like a Windows 7 app in distress.

While the dialog may be a reference to the disastrous movie adaption of the delightful US TV cheesefest CHiPs, we suspect that whatever runs behind the scenes of the fry flinger's drive-thru screen has taken a tumble.

For those unfamiliar with the American television show, CHiPs was concerned with the adventures of a pair of California Highway Patrol officers named Ponch and Jon and ran for six seasons from 1977 to 1983. Best not mention the 2017 feature film of the same name and its sub header: "Chip Happens." Something did happen, but it wasn't good (in the opinion of this hack, at least.)

Sadly, not only is the operating system on which we suspect things are failing high up on Microsoft's naughty list, the service of CHIPS has stopped. A large chunk of the fast food outlet's raison d'être.

But what, we wonder, could CHIPS stand for, if not for chipped potatoes? Chewing Hard Indigestible Potato Skins, perhaps?

The comments section is available for anyone with a backronym suitable for a family publication like El Reg.

In the meantime, we await the next platter of bork to be flung from McDonald's. It seems to have rather a lot. ®