An exciting week is in the offing for space fans as China's Chang'e 5 prepares for a lunar landing and Japan's Hayabusa2 is set to return its precious cargo to Earth.

The team running the mission today reported the separation of the lander and ascent modules of the spacecraft ahead of a planned descent to the Moon's surface, although a date for the actual landing has yet to be selected. 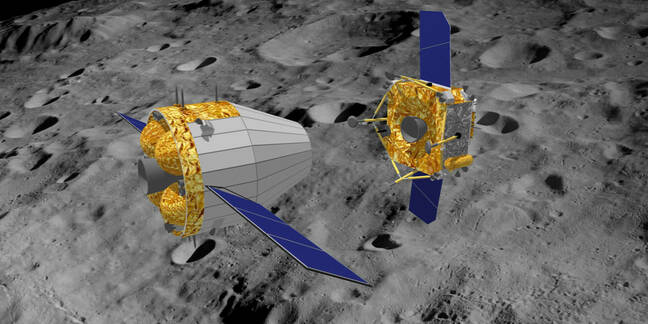 The spacecraft has settled into an orbit with an average altitude of 200km, having gone from an elliptical orbit to something more circular over the last weekend. As for the landing, something in the coming days looks a distinct possibility, barring official confirmation.

The probe only has a lunar day in which to complete a soft touchdown, perform its sampling and return the orbiter.

Once rendezvous has occurred, the return spacecraft will head back to Earth for reentry into the atmosphere on or around 15 December.

Hayabusa2 firms up its return to Earth plans

Ahead of Chang'e 5, JAXA's Hayabusa2 is set to return its bits of asteroid by 5 December (UTC) [PDF]. Launched on 3 December 2014, the probe arrived at the asteroid Ryugu on 27 June 2018. It departed a year ago and is now approaching the Earth, containing samples of the rocky body.

Having been given the green light by the Australian authorities, the probe is set to make TCM-4 (Trajectory Correction Maneuver [sic]) on 1 December, at approximately 1.74 million km from Earth. On 5 December, 220,000km out, the capsule will separate from the spacecraft ahead of a landing between 17:47 and 17:57 UTC on 5 December at Woomera, Australia.

As for Hayabusa2 itself, the probe will execute another TCM after releasing its precious cargo. Its extended mission will see the spacecraft head to the asteroid 1998 KY26 before dropping a target marker or possibly touching down. ®