PC makers warn of battle for air freight capacity, will have to fight for cargo space with... the COVID-19 vaccine

Around 30% of premium notebooks sent by plane during pandemic, expect price rises on devices that are available to buy in January

PC makers will be forced to compete for air freight space toward the end of this year as vaccines for COVID-19 are distributed around the world, both Dell and HP have warned.

The virus severely disrupted the computer supply chain, as lockdowns forced businesses to kit out their staff with new computers to work from home, and students who didn’t have their own machine bought one. This rapid rise in demand caught the industry off-guard. 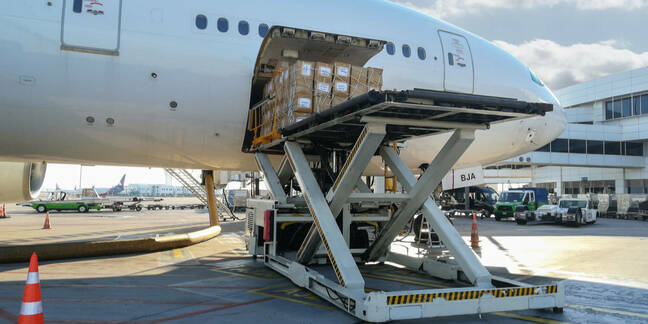 Make way, make way... Cargo loaded onto a plane at an airport

Since April, components including CPUs, ICs and panels have been in hot demand. Lenovo said last month that it could only fulfil 60 to 70 per cent of its orders, and reckons the total available market for PCs will swell due to the dynamics caused by the pandemic.

Jeff Clarke, Dell vice chairman and chief operating officer, this week warned financial analysts, who are themselves advising corporate investors on what to expect in Dell’s final quarter of fiscal 2021 that ends February in terms of the rising costs around the sales of its computers.

“One would be LCDs and then particularly the components that go into the LCDs, most notably T-CONs and drivers, ICs. Those are in short supply driving up the cost of LCDs,” he said.

“And then likely, there is going to be challenges in the freight network towards the very end of the year as airplanes get filled up with vaccines and are all competing for a limited amount of space. So that’s how we look at the cost environment.”

Vendors do typically send a portion of their hardware by air, though these tend to be premium items or ones that customers have an urgent need for and may be prepared to pay more per box for air rather than sea logistics.

There is going to be challenges in the freight network towards the very end of the year as airplanes get filled up with vaccines and are all competing for a limited amount of space. So that’s how we look at the cost environment

HP, which also released financial results for its Q4 of fiscal ’20, concurred there are “some headwinds and tailwinds on cost” that are facing the organisation in the run up to year-end, including components and shipping.

“And we do expect that there will be some higher logistics costs,” said Marie Myers, chief financial officer. “Particularly in, we're using a sort of a stronger mix of air. But we do have some one time related COVID supply chain costs that we expect will be lower going into Q1.”

As for component availability? CEO Enrique Lores said he was fearful of sounding “like a broken record” as he’d been discussing the “limitations” that HP faced in supply this year, but he warned thing aren’t getting better soon.

“The backlog that we have at the end of Q4 is the biggest we have ever had. So it’s not that the difference between supply and demand is being reduced, it has actually been increased, but it’s all been driven by increases of demand…. And we expect that this situation will continue at least through the first half of our fiscal 2021.”

Canalys boss Steve Brazier told us that in "normal times" around a fifth of notebooks would be sent to Europe by air freight. These would be higher-end models where there is more margin involved - retail devices tend to come by boat and as such need to be ordered many weeks in advance.

"But these are not normal times, because of Covid, as well as the worldwide shortage of components (especially panels) needed to build PCs. So currently around 30 per cent of notebooks are arriving by air freight as the PC vendors do all they can to fulfil what remains a very high level of demand.

"The cost of air freight has been rising all year because, quite obviously, there have been very few planes in the sky. The arrival of the vaccine will mean that there is yet more competition for the very little air freight capacity that currently exists in the world.

"In the old days, only fools bought new PCs for Christmas because they were always so much cheaper in January. That will not be the case this year, when prices could well rise in the New Year. Anyone looking to buy a notebook should buy one soon as long as they are lucky enough to find one!" ®