Ideally, government regulations should not be open to interpretation, but the UK's wishy-washy response to the coronavirus pandemic has only left people scratching their heads – or, worse, thinking of ways they can bend the rules.

Is it 2m social distancing, or 1.5? Is it stay at home, save lives, protect the NHS, or hands, face, space? If a Tier 2 resident meets a Tier 3 resident, does the planet explode? Not if it's Christmas, it would seem, but only as long as the window is open.

Number 10's loathsome affection for meaningless soundbites doesn't help, and the current vapid debate rocking the press is this – what constitutes a "substantial meal"?

Under the system due to come into force tomorrow with the end of Lockdown 2.0, pubs in Tier 2 will not be allowed to serve drinks unless they come with a "substantial meal" and table service. Everyone must be out by 11pm too.

Conjuring the opinion from thin air, he told London radio station LBC: "I think a scotch egg probably would count as a substantial meal if there were table service. Often that might be as a starter, but yes, I think it would." 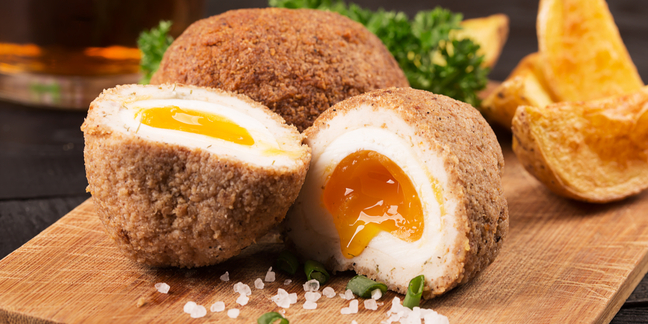 Eustice insisted it's a term "understood in licensing" – as did Number 10 when pushed for clarity by LBC. "It's a principle that's well established in the hospitality industry and it's something they've been applying for some time," a spokesbeing said.

The Register asked a contact who manages a pub what he understands by the term, and he said: "Technically the 'substantial meal' is already in place because that allows 16 year olds to have an alcoholic drink with a 'substantial meal'. Whenever that has happened we have only ever done it with a full, table meal."

But when asked if the definition has ever been more concrete than that, he said the government "have basically turned around and gone, 'you should already know what a substantial meal is.'"

The problem is that no one will officially draw a line between bar snacks and "substantial meals". Whether this is to give pubs some wriggle room when the Five-Oh come crashing through the door or just plain incompetence is anyone's guess at this point.

Police raids over interpretation of the "substantial meal" have happened. Back in October, Manchester pizza restaurant Common was told to stop serving "fucking massive" – their words, not ours – 22-inch slices because some cops reckoned it didn't count, but couldn't say why.

SLICES ARE CANCELLED 👮👮‍♂️ The po-po came and shut down our by-the-slice game yday so now it’s FULL 14” and 22” pizzas only. Slices cut from 22 inch pizzas don’t fit the substantial food brief but they couldn’t tell us what substantial food was. pic.twitter.com/bNS8kJB0lP

They added: "It's almost as if the brief is just a slogan... and nobody on the frontline has been given any substantial info beyond that. This government leading with baseless sloganeering? UNPRECEDENTED TIMES!" Common was later allowed to continue serving them through the pandemic.

Nor is it the first time a minister has kicked the "substantial meal" landmine. Housing secretary Robert Jenrick told LBC in October that "a Cornish pasty with chips or side salad" would be acceptable at a table in a pub. Cornish pasty and chips? No wonder we're the fat man of Europe.

In Brighton, however, a landlord thinks he's found a loophole in the Tier 2 restrictions by serving a pint named "Substantial Meal". So, as you can see, this is going well.

Is a boiled egg wrapped in sausage a "substantial meal"? We'd argue it can be. The Register's take, courtesy of the late Lester Haines' "post-pub nosh neckfiller" series, goes down like a lead bullet. Give it a try.

Before you swan off to the kitchen, a word of advice. We all want our beloved taverns to still be there when this is over, but use your best judgment. Stay at home, get some tinnies in, and browse the post-pub nosh archives for more unambiguously substantial grub.

Hat-tip to reader Kavan for reminding us we have literal stacks of ugly-delicious recipes lurking within El Reg's jiggling underbelly. ®