Don’t panic, but five jet drones just used their AI to chat and collaborate while in flight

Tests in Australia saw five surrogate jet aircraft equipped with “advanced autonomy technology, including on-board command and control and data sharing capabilities” that allowed the planes to chat as they flew.

“The tests demonstrated our success in applying artificial intelligence algorithms to ‘teach’ the aircraft’s brain to understand what is required of it,” said Emily Hughes, director of Phantom Works International. “The data link capabilities enabled the aircraft to communicate with the other platforms so that they could collaborate to achieve a mission.”

The aircraft used were a mere 11 feet long and only reached 270 km/h. So this is not top-notch fighters working together.

Boeing’s stated goal for this technology is to deliver “fighter-like performance, measuring 38 feet long (11.7m) and able to fly more than 2,000 nautical miles.” The aerospace giant envisages such craft will “use artificial intelligence to fly independently or in support of manned aircraft while maintaining safe distance between other aircraft.” 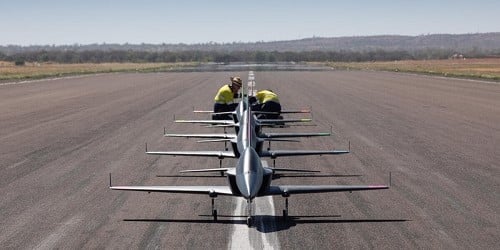 The Boeing autonomous surrogate jets
used in the test flights

Roles in support of piloted aircraft are very much on Boeing’s mind, as a means of making one manned plane able to project more force.

The company’s not suggesting combat roles, instead imaging these connected drones will “support intelligence, surveillance and reconnaissance, tactical early warning missions and more.”

The test flights will be used to inform development of future Boeing autonomous systems. ®