China has released video of its Chang’e 5 probe successfully … erm … probing the moon.

After landing successfully on Tuesday, the probe spent a day or so preparing to drill into the satellite in order to unsettle enough Moon-stuff to offer terrestrial scientists useful insights into Luna’s composition.

China's Chang'e-5 probe has completed sampling on the moon, and the samples have been sealed within the spacecraft, China National Space Administration announced Thursday morning. pic.twitter.com/L7db2HRpXc

“The lunar soil structure detector and other payloads configured by the lander are working normally, and scientific detection is carried out as planned, and sampling information support is provided,” says the Program’s machine-translated announcement. 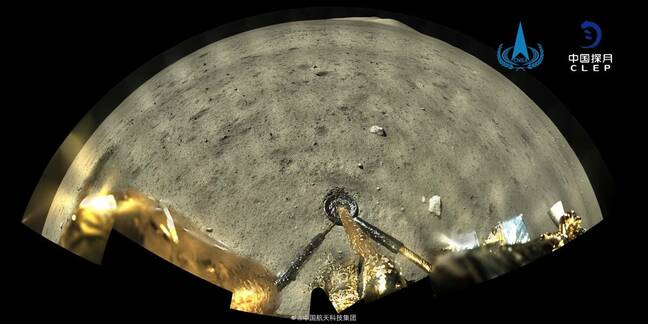 Chang'e 5 on the moon. Image: CNSA and CLEP. Click to enlarge

To scoop the dirt, the probe used its drill and an arm that plucked other material from other locations. The resulting rubble was stowed in a capsule that was sealed so tight it includes Lunar vacuum.

China’s mission timeline plans for Chang’e 5 to spend about two weeks on Luna observing its surrounds before heading home and landing its sample return capsule on December 17th. ®