Historically, AWS has been cool on the idea of hybrid cloud or multi-cloud, but the company also claims to be customer-driven. 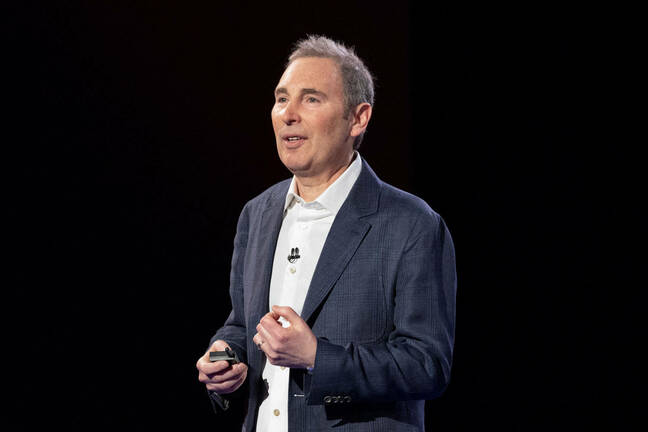 During his re:Invent keynote, Jassy said in reference to running containers that "people wanted to have the same management and deployment mechanisms that they have in AWS also on-premises. Customers have asked us to work on this." Jassy followed with the introduction of Amazon ECS Anywhere, which "lets you run ECS in your own data centres" and Amazon EKS Anywhere, which "lets you run EKS in your own data centres."

ECS is the company's Elastic Container Server, while EKS is Elastic Kubernetes Service.

"We're going to open-source the EKS Kubernetes distribution to you," Jassy added, "so you can start using it on-premises and it will be exactly the same as what we do with EKS, take all the same patches and updates." He positioned this as being for customers preparing to transition to EKS Anywhere, but the licence is Apache 2.0 and the project is now on GitHub as EKS Distro.

This has enabled Canonical to jump on board, with AWS head of product marketing Nikki Rouda saying: "Amazon EKS Distro (EKS-D) builds on our productive collaboration with Canonical around Ubuntu on AWS, and allows us to expand EKS beyond AWS cloud on any machine running Ubuntu. The full EKS experience now comes in a single, immutable package with automatic updates, for low-maintenance and increased security."

What exactly has AWS announced? Compute services veep Deepak Singh told us: "EKS Distro is a distribution of Kubernetes that underlies EKS, it is exactly the same bits. We use some components on EKS that are specific to AWS. EKS Distro does not include them.

"Starting next year is when we start adding operational tooling around it. Things that allow for cluster lifecycle management and automation. So that will be the key pieces of EKS Anywhere that will be shipped in the first half of next year." What this means is that EKS Distro lacks the most interesting parts of AWS EKS.

The EKS Anywhere variant can optionally be linked to a cloud-based AWS EKS dashboard. "It will get visibility into all your clusters running wherever they are, and that makes it easy for you to update and patch and things like that," Singh told us. "But EKS Anywhere fundamentally actually does not require you to be connected to an AWS region. That's our recommended model."

He added: "The definition of what AWS is, and what infrastructure is, is evolving. You had the big Regions. Then we had the rack-level Outposts. Then Local Zones, Wavelength, but with containers you can go beyond that."

Edge computing is "a big driver for us," he said, the idea being to get an AWS-flavoured operational model everywhere it is required.

What will be the minimum requirements?

"Kubernetes is not cheap to run," said Singh, "but depending on what you want to do, you could run three VMs on a server. Ideally you'll have a couple of servers. On the ECS side, you can run on a Raspberry Pi, it's much simpler."

Is it now fair to describe AWS as supporting hybrid cloud? Multi-cloud? "We still feel that you are best served when you choose a particular cloud provider," said Singh, observing that what big customers ask for is the ability to integrate Kubernetes applications with other AWS services. For availability and capability, "we still very much believe that the best place to do [this] is in a single cloud," he said. But customers often start containerising on-premises applications first, and end up with "somewhat of a split brain where they're running container clusters one way on-prem and one way on AWS. The primary goal of EKS Anywhere is to take that away and make it a single operational model."

That sounds like hybrid to us, but not multi-cloud. Gartner analyst Arun Chandrasekaran concurred, telling us: "The objectives with EKS and ECS Anywhere is to enable more hybrid deployments and I don't think it is intended as a multi-cloud play by AWS." Chandrasekaran doubted whether EKS Distro will win wide adoption. "While AWS's decision to open-source EKS Distro is laudable, customers have to be self-supported or supported by other AWS partners if they are running these in non-AWS environments. This may limit its appeal to a narrow set of clients."

How much will EKS Anywhere cost? "We're still working on that. It won't be free," said Singh. "We will have a business model around it, but we're still working on the details as we get closer to GA. One of the things that we have to finalize is the support model. How we charge for it at all is to be determined."

With re:Invent under way, Google Cloud SVP Urs Hölzle has presented a different point of view, saying that multi-cloud is the future and that "single-cloud stacks impose a significant cost. Where there could be greater power drawn from the unique capabilities of every cloud, there is higher complexity and the limitation of proprietary systems."

Google has Anthos and hopes customers will want to run Anthos everywhere – including AWS as well as on-premises.

In business terms, this is easy to explain. The dominant provider has no incentive to encourage customers to include rivals in their cloud plans, while providers coming from behind have every reason to do so. With EKS Anywhere, AWS will have a more complete hybrid strategy, but its focus remains on being a customer's single cloud provider where possible. ®