Running joke: That fitness gadget? It's, er, run out

Something for the Weekend, Sir? It's a pain in the neck, that's what it is.

Yet another sports fitness wearable I was using has just given up the ghost... or should I say base-jumped off the suspension bridge of angel investment. The product didn't break; the city-based startup that designed it (albeit manufactured in China) and maintained its associated tracking app simply went out of business. What a pain in the neck.

Well, when I say I was using this sports fitness wearable, I mean I was right on the verge of putting it to a full testing regime. That is to say, it was next on my product reviewing list. OK, I was about to take it out of its box that had been sitting unopened on my spare desk for the last five months since it arrived. But still. Infuriating.

"Spare desk?" I hear you cry. Don't cry, he's not worth it. But just over 20 years ago I was passing through Ikea Croydon in order to acquire yet more Billys for the new house and noticed they were selling untreated pine desks for about £1.50 a pop. I bought three. One small problem – three in total, then – was that the desktop surface on each isn't particularly expansive. The stuff on my desk that I never quite get around to sorting out just ends up spilling across the second desk, and from time to time Mme D has to push some of it back from tumbling onto hers.

Oh and two decades later, the Billys look great when I'm Zooming. Who'd have thought it?

Now that the company has ceased trading – not Ikea, I mean the sports app startup – I will now have to sort out its disposal. Being a tech device, it will need separating into packaging, plastics, metal and electronics down at the local dump. I suppose this will give me an opportunity to find out what the product actually is and where on my person it would have been worn, as I have forgotten what it is and have lost the press release.

Still, what a pain in the neck these startups are. Typical bloody fancy fly-by-night jokers in foolishly huge city-centre lodgings, totally unsustainable financials; no wonder they went bust. They probably had ping-pong next to the kitchen, a slide coming down from the mezzanine, swings in the toilets and a bouncy castle in the boardroom.

If nothing else, the messaging is clear. I appreciate clear messaging, especially in the COVID-enhanced era of fake fake news and unspun spin respun. Here's some excellent clear messaging I spotted on a wall as I was passing through town the other day. 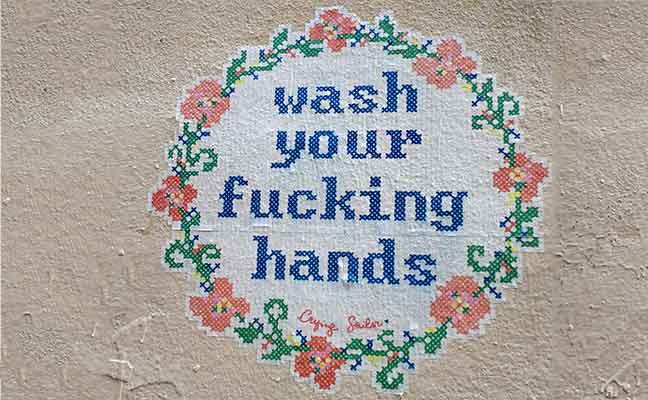 Vibrates? Pah! What the device ought to do is belt out a recording of my mum shouting: "Sit up straight! Stop slouching! Pull your shoulders back! You'll look taller!"

Still, I can see an expanding market for this type of nag-gadget. Perhaps a boxing glove that automatically punches users in the mouth if they leave their mic on during a webinar. Or a mouse that says, "Well, derrr?!" sarcastically when a user tries to drag and drop in a single gesture and runs out of deskspace – partly their own fault for buying a cheap untreated pine desk from Ikea.

My last sports fitness device that stopped functioning because the company stopped functioning was a pair of training insoles that measured gait and footfall technique. The one before that was an uncomfortable strappy thing that monitored heartbeat and respiration while playing aerobic sports or working out on the machines. A common aspect to each was that every product had its own dedicated app that was incompatible with everyone else's.

Worse, the apps would provide inconsistent and often contradictory reports. When I complained in a company's support forum that I was getting different figures than with other devices-with-apps, despite using the same heart and lungs for all of them, I was assured that everyone else's products were inaccurate and that I should put my trust in them that theirs told the truth.

Sod's law duly kicked in later that day, the device failing to record my workout heartbeat or respiration data at all for some reason. Putting my trust in them, I returned to the support forum to ask the technicians to confirm whether or not I am dead.

Not that I can make a great deal of use for these devices at the moment. Outdoor exercise is severely restricted, amateur sport is banned and gyms are locked up. Going for a little jog when you live in town is a pavement-beating affair which means having to wear a facemask. Only a complete snowflakey weed finds a facemask intolerable to wear but it does cause an imbalance during aerobic exercise: 40 per cent calorie-burning, 60 per cent gagging on the material sucked onto the back of your tongue with each in-breath.

Like most people I got used to this and of course there are advantages in being able to hide one's face. I hear that growing weird and unusually groomed facial hair behind the mask is de rigueur, not that I would indulge in such a thing. You won't find me sprouting a General Custer or a Terry Thomas, oh no.

Ultimately what's bugging me is that a whole bunch of startups have been sweating over their laptops to create proprietary sports fitness products with testosterone-enhanced levels of incompatibility, then gone bust and left us wondering why.

What if other fitness gear manufacturers did this? Imagine if I had to bring five sports bags with me to the gym because my trainers could only be carried in their own dedicated box, my shorts stored independently in a special flight case, socks de-creased overnight in their own bamboo holdall, T-shirt rolled into a patented flatpack, and my shreddies set to charge in a branded USB 4 recharging unit replete with a row of LEDs to indicate odour levels. And I could no longer spray antiperspirant under my arms because its app requires Android 11.

That said, my Huawei smartwatch is compatible with Google Fit. Oh the irony.

Given the parlous state of similar cross-product interconnectivity in other market segments such as domestic IoT, I don't expect much guidance from that direction either. Compatibility? Standards? Brand longevity longer than a yawn?

I'm told these things are coming and I should look forward to them with optimism. I suspect it's going to be a long while before I can leap for joy… followed by 20 star jumps and a sprint to the off-licence to celebrate.

But even just one of those commitments listed above would make this Moaning Lisa smile.

Alistair Dabbs is a freelance technology tart, juggling tech journalism, training and digital publishing. He would like it to be known that he has deliberately overplayed the idea that he is a fitness nut which might make him sound more interesting. He is not and he is not. More at Autosave is for Wimps and @alidabbs.