Hayabusa2 has had quite a ride and has more adventures ahead of it.

The probe launched in 2014 and spent three-and-a-half years travelling to near-Earth asteroid 162173 Ryugu, which has a diameter of about 1km and occasionally passes within 100,000km of the planet upon which you are (presumably) reading this story.

Hayabusa2 carried four rovers, one of which was used after the spacecraft shot a bullet at the asteroid to disturb its surface and stir up some matter to bring home in a sealed capsule designed to survive the rigours of re-entry to Earth’s atmosphere.

The probe bade farewell to Ryugu in November 2019 and early on Sunday morning, Australian time, the recovery capsule was spotted streaking across the sky as it made its way towards the Woomera prohibited area for a pre-dawn landing.

En route it was spotted by cameras on the International Space Station at 13:27 in the video below.

The probe later released the sample return capsule and ground-based observers were able to see it streak across the pre-dawn sky.

If you weren't in Coober Pedy to see it, we're bringing it to you! ☄️

Watch as the #Hayabusa2 capsule fireball crosses the sky headed for the Woomera Prohibited Area. Thanks to @JAXA_en for capturing this incredible #space moment. @haya2e_jaxa pic.twitter.com/L1cSA9Ep5z

The capsule carried the samples from Ryugu, plus a radar-reflective parachute and a radio beacon designed to make it easier to find in the very hot, dry, and nasty conditions often found in the region.

As it happened, everything worked, and news of the capsule’s retrieval emerged before lunchtime.

Capsule collection! The helicopter team immediately flew to the location identified by the DFS team. They searched for the fallen capsule by using radio waves and maps. Thank you very much!
(Collection Team M)#Hayabusa2#はやぶさ２#AsteroidExplorerHayabusa2 #HAYA2Report pic.twitter.com/KSyEbnU3Yd 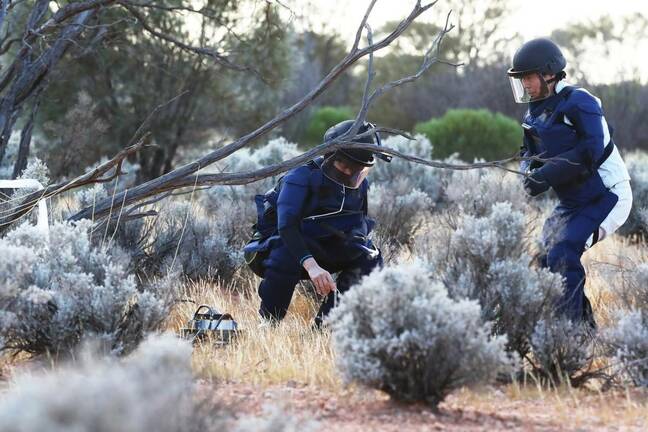 Before long, the capsule becamse safe to handle and was popped into a shiny box. 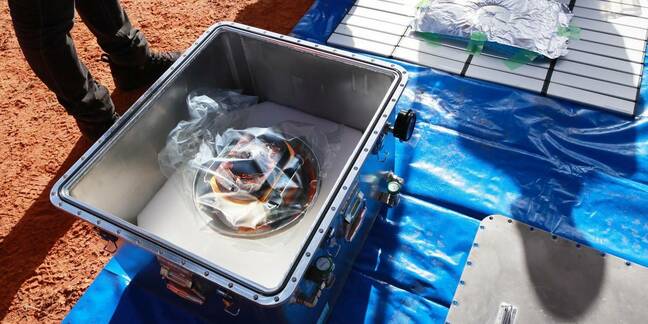 The sample return capsule in its box.
Click to enlarge

The precious cargo was soon on its way to the facility established to handle the landing.

Images of the sample have not yet been released and we’ll have to wait for some time to get them because the sample package has not been opened. That won’t happen until it is returned to Japan.

Another story we’ll have to wait for is news of Hayabusa2’s ongoing adventures, because the probe skipped off past Earth and has enough fuel aboard to line up a 2026 rendezvous with another asteroid, the mysteriously ruddy 2001 CC. Japan’s space agency has even contemplated a third asteroid visit, in 2030, and even a possible fly-by of Venus. As it flits about the inner solar system, the probe’s cameras will also be used for observations of exoplanets and other phenomena. ®