Bezos to the Moon: Blue Origin fires up BE-7 engine to be used in human lunar mission

Also: Orion challenges and a quarter century since SOHO's launch

In Brief As the Chinese Chang'e-5 mission sent its precious payload of lunar dirt into space, Jeff Bezos's Blue Origin kicked off a fourth thrust chamber test series of the BE-7 engine, which will power the National Team Human Landing System (HLS) for NASA's Artemis program.

Artemis's goal is to put human boots on the lunar south pole region by 2024.

The BE-7 is to be used both on the descent and transfer elements of the HLS, and so far the thrust chamber has seen a cumulative testing time of 1,245 seconds.

The ascent element of the HLS National Team is being developed by Lockheed Martin, which is also responsible for crew flight operations and training. Draper is responsible for descent guidance while Northrop Grumman is developing the transfer element which will take the lander to low lunar orbit. 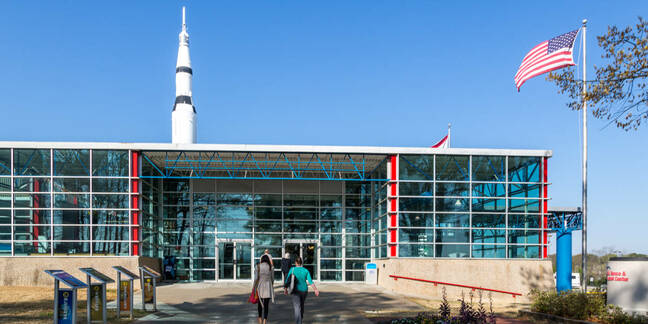 The NASA Marshall Space Flight Center in Alabama, USA, where Blue Origin fired up its lunar landing engine on Friday

'Adjusted dates' abound for Orion and Artemis I

Plans to transfer another part of NASA's long-dreamt Moon mission, the Orion capsule, from the Neil Armstrong Operations and Checkout Building to the Multi-Payload Processing Facility at Florida's Kennedy Space Center are to be "adjusted" following an issue with a power and data unit (PDU).

The issue with a redundant channel in the PDU cropped up while engineers powered up the capsule ahead of the pressurisation of the module righting system (used to make sure Orion is pointed upwards following splashdown.) The PDU is on Orion's crew module adaptor and, by all accounts, might be a difficult fix for engineers to accomplish without further eroding the chances of Artemis I launching before 2022.

ESA celebrated the 25th anniversary of the launch of the Solar and Heliospheric Observatory (SOHO), the agency's joint mission with NASA to observe the Sun. The 20 million images snapped and 50TB of archived data is indeed quite the achievement for the probe, which has lived well beyond its initial planned mission of two years and enjoyed an additional career as a comet observer.

Once considered lost, ESA and NASA's SOHO came back from the brink of death to work even better than it did before

Its prodigious contributions to solar science aside, SOHO could also be regarded as one of the most fortunate spacecraft in ESA's fleet both on and off Earth. A late decision to refurbish the probe's reaction wheels (used for pointing) as well as a last minute swap of traditional tape recorder for SSD have contributed to the SOHO's longevity. The good fortune continued with the discovery of a fault with the Atlas launcher prior to liftoff and, of course, the recovery from the infamous incident that saw controllers lose a perfectly functioning spacecraft.

Sadly, we are unlikely to see another 25 years. While the probe continues to perform admirably, and engineers reckon the solar arrays will keep power flowing at least until 2026, other spacecraft carrying more advanced versions of its instruments are due for launch. It therefore looks like 2025 will see SOHO made redundant and the plug pulled.

In the meantime, take a moment to celebrate the solar science generated and the team that designed and built SOHO all those decades ago, and those who continue to operate it a full quarter of a century after launch. ®