Google has opened its forthcoming operating system, Fuchsia, to community contributions, but has not addressed the question hanging over it: how will it be used?

The OS's Developer Advocate, Wayne Piekarski, has written about a new stage in opening up the project to external input and scrutiny. Put into place were mailing lists, a public issue tracker, a new governance model, and a process to become a contributor defined as one of four roles: Member, Committer, Owner or Global Approver.

Fuchsia is covered by multiple licences. The kernel, called Zircon, is under an MIT-style licence. User space components have a BSD-style licence, with an additional patent grant which appears to be designed to discourage patent litigation. Contributors have to sign the Google Contributor License Agreements.

The governance currently consists of an Eng Council responsible for maintaining the Fuchsia roadmap and approving or rejecting RFCs (proposals for adding features). There are currently five members, all Googlers, and the chair is Dr Adam Barth, an academic and security expert whose publications include "Towards a formal foundation of web security" and "The Security Architecture of the Chromium Browser".

Is the company now asking the community to work on a Google project for free? In a sense that is the case, but there could be benefits for contributors...

Fuchsia is officially described as "a new open source operating system created at Google that is currently under active development." Its purpose is vaguely stated as "to meet the needs of today's growing ecosystem of connected devices." That might include smartphones, tablets and laptops as well as wearables and embedded systems. 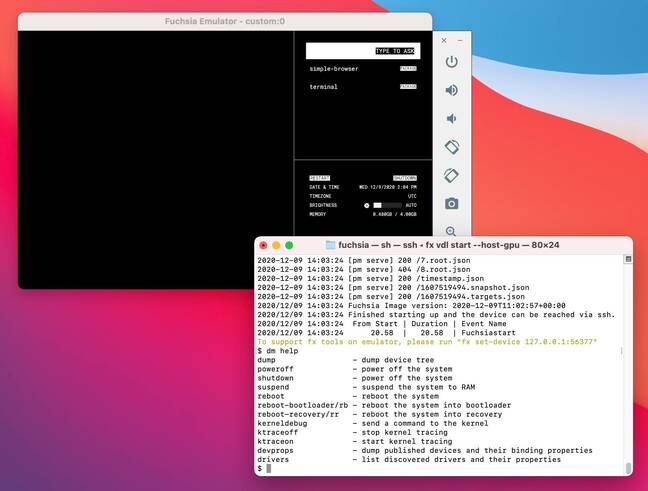 The Fuchsia emulator running on a Mac – our very own build

The architectural principles emphasise security, update-ability (perhaps with less operator dependence than is the case with Android), support for a variety of languages and runtimes, and pragmatism. Google has said: "Fuchsia is not a science experiment, it's a production-grade operating system." There is a roadmap but it is not a revealing one, covering only low-level projects to improve the operating system.

The technical perspective is that the Zircon kernel is designed for asynchronous programming and security. Software is sandboxed and "applications running on Fuchsia have no ambient authority: applications can interact only with the objects to which they have been granted access explicitly," the docs say.

Fuchsia is also component-based: "Nearly all user space software is a component, from system services to end-user applications." Software is delivered in packages containing components, files and metadata.

The new OS has a user interface based on Flutter, the cross-platform framework that targets Android, iOS, web, Windows and macOS. Flutter is important since it means Fuchsia, if released as a general-purpose operating system, will have a base of native applications that can easily be ported.

Is Fuchsia for the world, or for Google? The docs say: "Google steers the direction of Fuchsia and makes platform decisions related to Fuchsia." Other Google-sponsored projects including Android and Chromium show that the company can successfully manage projects that are primarily for its own use but which also allow others to use the code. Google will no doubt add its own proprietary pieces in future products using Fuchsia.

Is the company now asking the community to work on a Google project for free? In a sense that is the case, but there could be benefits for contributors in areas like gaining deep knowledge of an important future technology, adding features that may be useful for third-party applications, or simply improving the quality of an operating system that may become widely used.

Google is well known for enthusing about projects and later abandoning them. Will Fuchsia be another example? The company already has both Android and Chrome OS, both based on Linux.

The signs are that Google is serious about Fuchsia and putting plenty of resources into it, particularly if you include the energetically developed Flutter. The language Google uses to describe Fuchsia has shifted, no longer saying it is an experimental concept but rather, in Piekarski's new post, "not ready for general product development". One to watch. ®