Google is set to be at the end of another antitrust lawsuit, with Texas’ Attorney General Ken Paxton announcing on Wednesday he will sue the internet giant for damaging competition in the ad-tech market.

Somewhat unusually, the allegations were made via a slick video that looked like a trailer to a reality TV show. A press release followed later along with a copy of the complaint [PDF] expected to be filed against the Silicon Valley titan.

Following in the Trumpian reality show theme, the video was shared via Twitter, with equally attention-grabbing language: “#BREAKING: Texas takes the lead once more! Today, we’re filing a lawsuit against #Google for anticompetitive conduct,” and: “This internet Goliath used its power to manipulate the market, destroy competition, and harm YOU, the consumer. Stay tuned…”

The announcement is just the latest in a blitz of high-profile news emanating from Paxton’s office. In the past week, he sued Facebook, along with much of the rest of the United States, alleging illegal anti-competitive behavior. The attorney general also unsuccessfully [PDF] sued political battleground US states for “unconstitutional changes” to election laws – yes, that’s right, Paxton is on the Trump train when it comes to trying and failing to reverse the result of November's presidential election because the wrong person seemingly won.

What’s behind the attention-seeking behavior? Critics suggest it may have something to do with the fact that Paxton is under investigation by the FBI after two of his top aides filed separate whistleblower complaints against him for allegedly using his office to benefit a political donor and friend, real estate investor Nate Paul.

In addition, Paxton has been under indictment for an extraordinary five years on securities fraud charges. The case has been strung out for so long so, The Texas Tribune has even created a timeline to explain how it has managed to carry on this way.

Bear this in mind when you get to, say, section 141 in today's complaint, which states Google struck a deal with Facebook in 2015 to secretly access people's end-to-end encrypted WhatsApp messages and files: 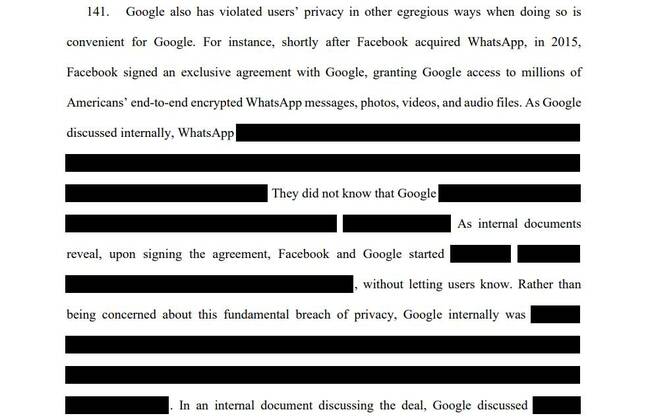 However – and far be it from us to defend Google – WhatsApp didn't complete its implementation of end-to-end encryption until 2016. And what the lawsuit describes sounds exactly like the chat app's publicly documented opt-in Google Drive backup feature as opposed to a hidden backdoor to data.

On more concrete ground, according to the flashy video trailer, Google used its market power to rig ad auctions and so drive up pricing. In the followup announcement, Paxton claimed:

Google is a trillion-dollar monopoly brazenly abusing its monopolistic power, going so far as to induce senior Facebook executives to agree to a contractual scheme that undermines the heart of competitive process. In this advertising monopoly on an electronically traded market, Google is essentially trading on ‘insider information’ by acting as the pitcher, catcher, batter and umpire, all at the same time. This isn’t the ‘free market’ at work here. This is anti-market and illegal under state and federal law.

Arkansas, Idaho, Indiana, Kentucky, Mississippi, Missouri, North Dakota, South Dakota, and Utah – all states with a Republican Attorney General, like Paxton – are listed on the complaint along with Texas.

This legal challenge follows the US federal government's sueball lobbed at Google in October, which claimed the biz abused its position of dominance and damaged competition. And on Thursday, the search kingpin will be sued by 30 US states for unfairly favoring its own products in web results, it is rumored. ®