SmartDrive, DiskCopy... it's life at Redmond in the DOS era

Interview Everyone remembers their first time. It might be Commodore-flavoured, or carry a whiff of Sinclair about it. For former Microsoft engineer Dave Plummer, it was a TRS-80 in a 1979 Radio Shack.

Plummer now runs a YouTube channel stuffed full of nerdery, though decades ago he played a role in the rise of Microsoft, contributed to MS-DOS, wrote Windows components familiar to all, and stuffed Microsoft Bob into XP's box.

The Register had a chat with him about how it all began.

"I first wandered into a Radio Shack store in about 1979 when I was 11, where I saw my very first computer," he said. "It was not connected yet as the staff had not figured out how to set it up.

"Being somewhat precocious, I asked if I might play with it if I could manage to set it up. On a lark they said, 'Sure kid, have a shot', and 10 minutes or so later I had it up and running." 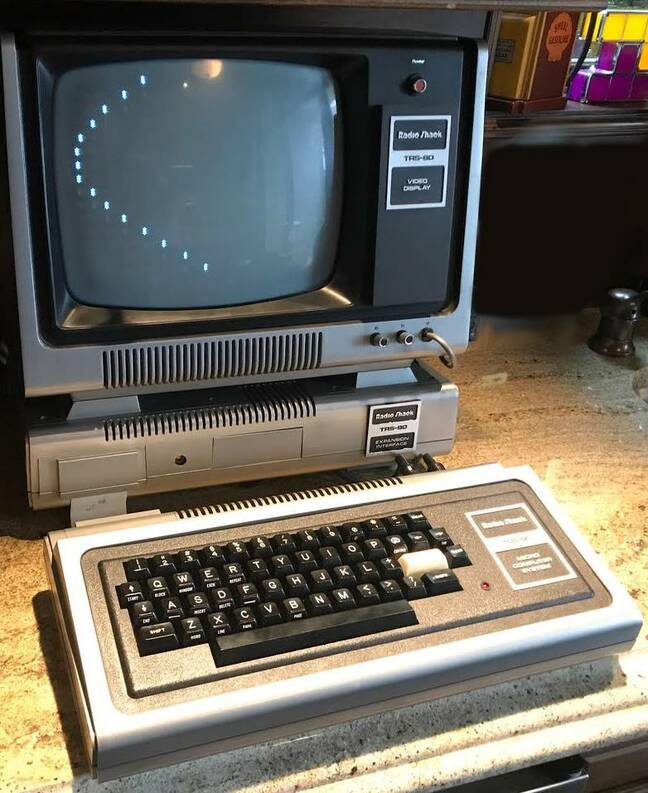 Dave told us that the computer itself was a TRS-80 Model 1 with a mighty 4KB of RAM: "I found one still new in the boxes two years ago and have it in my office, next to my 4K PET!"

Back in the late 1970s, however, he was given free rein on the then-expensive kit by the impressed store manager. Like many of us, Plummer started by tapping in BASIC programs and, also like many of us, soon tired of its limitations.

"A few years later," he said, "I was introduced to assembly language programming as a friend and I undertook to write a game for the C64 over the summer – although we never finished it, I learned an enormous amount about assembly ranging from common ASCII conversion to sprite multiplexing interrupts."

His assembly skills saw him work briefly as a games programmer for a company in Ottawa, Canada, by the time he turned 18. He later returned to school and completed a computer-science degree at the University of Regina, which was essential for emigrating to the US and working at Microsoft, initially as an intern before going full-time. He decided to join the software giant after reading a book documenting its founding, and figured that was where he wanted to be.

It's not clear if Plummer's fellow interns at the time did their own take on Microsoft the Musical. It sounds as if he was a little preoccupied. "To me," he said, "it's still among my best performances under the highest amount of pressure and yet I was merely an intern. The fact that they give you real tasks, and not busywork, really contributed to that."

Working on MS-DOS required a leap into the world of x86 assembly: "By then I was a PDP-11 and 68000 snob and preferred my opcodes in the natural order, so x86 was an abomination to me at first," he said. "I adapted quickly though and got to work on what it turned out would be a fairly heavy summer workload."

Nowadays Plummer does not have to dip his toes into the waters of x86 assembly. Having enjoyed Pascal in school, he "rediscovered much of the same 'elegance and cleanliness' in C#."

While he's never had to use it professionally, Plummer noted: "Even much of my current LED code on the channel is done in C# and then translated for the little microcontrollers, simply because that's the language I prefer to code my effects and systems in!"

Plummer's input into one of the last hurrahs of MS-DOS was impressive. His first task was to move the disk compression utility into the High Memory Area, freeing up more of that all important lower 640KB.

He added support for CD-ROMs to the disk-caching tool SmartDrv and integrated it into MSCDEX (Microsoft CD-ROM Extensions). "From there," he said, "I moved onto a number of smaller tasks, like making Diskcopy single pass, before finally writing the new Setup [for MS-DOS 6.2]." The change reduced the number of floppy disks required, "presumably saving millions."

While his role in utilities such as the Windows Task Manager is well documented, Plummer also recalled an early stab at a Windows Media Center PC built around Windows NT. "We demoed it during the keynote of the Networld/Interop conference, with Jim Allchin and myself playing Sega Virtua Fighter in 3D before turning to movies and cable, etc."

The Windows XP Media Center Edition (and the versions that followed before the product was eventually led around the back of the barn by a sad-faced engineer) was a very different beast. Still, "I really wish Microsoft had made a more concerted push into living room alongside Xbox, but that's because I wanted to work on such a thing, not because I could prove it was a good business."

After his departure from Microsoft in 2003, Plummer continued to sell his own utility software before his company was eventually snapped up.

Plummer is also a fan of the 1980s Atari game Tempest, seen being played below by Dave. "I go through bursts," he explained. "I will play Tempest for about 30 minutes a day every day religiously for a month or two, then stop and not touch it again for six months or a year. Each time I return I always wonder 'Is this the time where aging actually shows up and my performance is worse than it was last time?' but with practice, the same skill level returns.

"I love the game for having been serendipitously designed to be exactly difficult enough for me that it never becomes boring and yet never overly frustrates me either. It's a masterful piece of game design, or they got really lucky, because very few people have played those higher levels."

Plummer now runs the YouTube channel Dave's Garage in which he shares Windows war stories, hacks the Tempest ROMs, and delves into all manner of nerdery.

While the LED and hobbyist focus of some of the channel's videos can be attributed to a cervical disc-related lay-up in which Plummer taught himself electronics and hardware rather than indulge in a Netflix binge, the channel itself originated from a different diagnosis.

After Plummer joked that, "I might be on the spectrum, but it's a non-visible portion," during a lecture, a friend and former Microsoft manager suggested that perhaps rather than making a joke out of it, he should take some tests.

"Several months and 12 hours of in-depth testing later, I was diagnosed with autism (what would have been Asperger's in years past). And not just a little bit... but think House, not Rainman. More accurately, I was officially diagnosed with 'Autism Spectrum Disorder'.

"I used to be 'gifted', but now I had a 'diagnosis', and it had a better and worse. But the last thing I wanted was to be labelled in such a way as to be limiting."

Diagnosis in hand, Plummer decided to operate outside his comfort zone where possible: "I held big open shop parties, I gave lectures, I wrote a book, and started a YouTube channel.

"When you're an introverted programmer who prefers to be alone, there's not much that's more foreign than sticking your face on the internet in 4K and saying a big Hello to the world, so that's what I did."

And those videos? Each 15-minute segment takes a week to put together and, unsurprisingly, he noted that his viewers seem to like the nostalgic tales the best, "but 10 gigabit networking is a close second."

"I wish I were a lifestyle vlogger," he said ruefully, "who could simply ramble on for 20 minutes and get a million views, but that's not my fate." ®