Also: Another One Leaves the Crust, SLS gets ready to rumble, and SpaceX sets off the 2021 fireworks

In brief The European System Providing Refueling, Infrastructure and Telecommunications (ESPRIT) took another step closer to reality this week as the European Space Agency (ESA) inked a €296.5m contract with Thales Alenia Space to build the module for the Lunar Gateway.

ESPRIT will consist of two elements. One will deal with voice, data, and video while the other will be a refuelling module providing the Gateway with xenon and chemical propellants "as well as supporting future reusable lunar landers and further deep space transport." 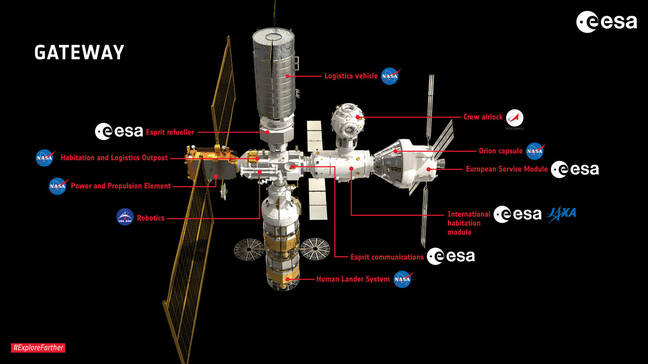 It's all terrifically exciting for fans of human-tended missions to the Moon – the communications element is planned for launch in 2024, mounted on the first US Gateway module, named HALO. The refuelling element is expected to launch in 2026.

Countdown to the first firing of NASA's Space Launch System

NASA has targeted 17 January for the all-important final test in its Green Run series for the core stage of its Space Launch System (SLS): the hot fire.

Having verified cryogenics can be loaded into the beast's tanks, and the systems all perform as expected, the last step is actually light all four of the Space Shuttle-era RS-25 engines at the base of the stage and run them for a full eight minutes to simulate a launch.

The Artemis I stage is currently mounted in the B-2 Test Stand at NASA's Stennis Space Center and a success would mean a refurbishment and shipment by barge to the Kennedy Space Center in Florida. The SLS will then be assembled ahead of a hoped-for first, and much delayed, uncrewed launch toward the end of this year.

'Another One Leaves the Crust' – Rocket Lab readies its next mission

Rocket Lab continued its strong rocket-naming game for its 18th Electron mission, due for launch from the company's Launch Complex 1 on New Zealand's Māhia Peninsula in a window opening on 16 January.

I love this mission name. https://t.co/aWYpX7c4vb

The mission is a dedicated one for the European company OHB Group and will see a single microsatellite lofted into orbit. It kicks off a potentially busy year for Rocket Lab, which hopes to launch the first missions from its US Launch Complex 2 in Wallops Virginia and Pad B at New Zealand's Launch Complex 1.

2021 should also see the company launch a Photon mission to the Moon to support NASA's CAPSTONE program as well further progress on its recovery plans for the Electron booster.

Finally, SpaceX kicked off what promises to be a busy year with the launch of the Turksat 5A mission from Space Launch Complex 40 (SLC-40) at Cape Canaveral Space Force Station in Florida.

It was the fourth mission for the first stage of the Falcon 9 booster which had supported a pair of Starlink launches as well as a GPS mission. As with its previous launches, the first stage made a return to the Just Read the Instructions droneship following separation.

The fairings were also reused; one half previously saw action on the GPS III Space Vehicle 03 mission and the other flew aboard the ANASIS-II mission.

January and February will see further missions, including yet more Starlink launches, before the second operational flight of the Crew Dragon for the Commercial Crew programme at the end of March or beginning of April.

The cargo variant of the Dragon spacecraft is currently docked to the International Space Station (ISS) and expected to return to Earth next week. ®