A few improvements and a handy web app utility, but older kernel causes problems for some hardware

The Linux Mint team has released version 20.1 - codenamed Ulyssa - with long-term support to 2025 and the usual three variants: Cinnamon, MATE, and Xfce.

This is the first point release to Linux Mint since version 20 in July 2020. Both editions are based on Ubuntu 20.4 LTS, which is why long-term support is promised. The team has said that the same Ubuntu 20.04 package base will be used for all versions of Mint until 2022, which is when the next Ubuntu LTS is set for release, version 22.04. The kernel in Mint 2.01 is therefore 5.4, released at the end of 2019. The approach reflects a philosophy that a long-term support release is the right thing for most users, though using an older kernel also has downsides.

Mint 20.1 has two new applications. The first is a Webapp Manager which, the release notes say, lets users "turn any website into a desktop application." Once set up, a web app has its own window and icon, displays in the Alt-Tab selector, and can be pinned to the panel, a quick launch bar not entirely dissimilar to the Windows 10 taskbar. The rationale for the feature is that "it's easier to multi-task between applications on the desktop than it is between tabs in a web browser. As more and more useful tools are available on the web, it was important for Linux Mint to make it easier to create web apps." 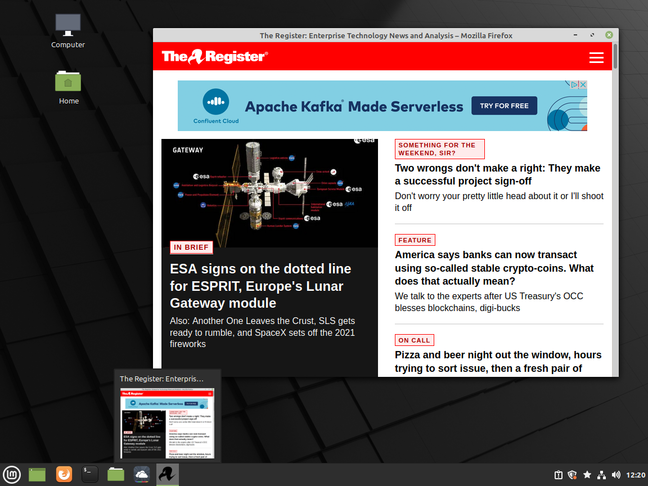 Linux Mint 20.1 showing how a website can be displayed in its own window as a web application, pinned to the Panel for quick access

The code for Webapp Manager is in Python and can be found on GitHub. Apps can be based on various browsers including Firefox, Brave, Chrome, Chromium, Epiphany, Vivaldi, Ungoogled Chromium, and Microsoft Edge. Although technically there is not much to it, it is a handy feature with usability advantages. 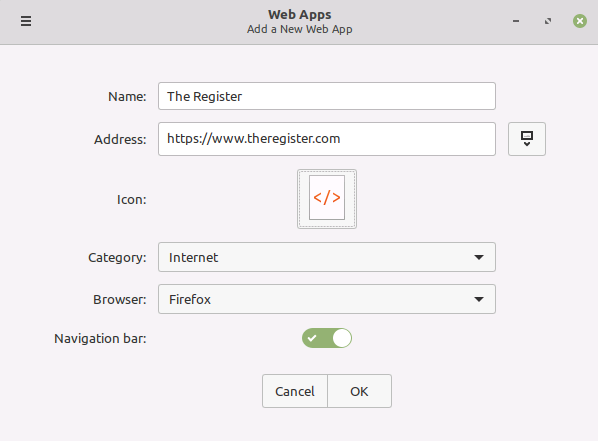 The second application is Hypnotix, an IPTV player and also a Python application, which streams from IPTV providers. One provider, called Free-IPTV, is pre-installed. It is not doing anything users could not already do with Kodi or VLC but the focus is on ease of use.

Another new feature is Add To Favorites, which populates a favourites menu in the Panel, giving quick access to files and folders. Support for this is extensive, and it is included in all file dialogs if they are built with GTK3, as well as in selected applications.

The Cinnamon desktop, developed for Linux Mint, has a claimed 5 per cent improved rendering performance for window management at resolutions up to 4K, a faster JavaScript interpreter, and improved power management from support for "suspend then hibernate" in Systemd.

Printing and scanning support has backtracked. Linux Mint 20 included driverless printing over USB using a library called ippusbxd (IPP over USB). "Ippusbxd turned out to be a disappointment and created more problems than it solved," according to the notes, so it has been removed in 20.1. The Chromium web browser is now in the Mint repository simplifying installation.

Under "Known issues" the Mint developers note that the Canonical Snap Store remains disabled. It is easy to enable, but the Mint team argues that Snap "only works with the Ubuntu Store" and that it uses "a protocol which isn't open, and using only one authentication system."

Another issue is that some APT packages in the Ubuntu repository "not only install Snap as a dependency but also run Snap commands as root without your knowledge or consent." Presuming Canonical continues to depend increasingly on Snap, this may be a growing problem for Linux Mint, but for the moment the absence of Snap is not a huge inconvenience. Flatpak, an alternative deployment system that also lets developers build one application for every distribution, is supported in Mint and has improved support in version 20.1.

The Mint developers also provide Edge install images, which include "newer components to be able to support the most modern hardware chipsets and devices." The Edge versions are described as less stable so should only be used if the standard release will not install or boot.

Along the same lines, a user noted that "most hardware released last year" is only supported in the Linux kernel 5.10.1 and that "kernel 5.4 is very, very old." In response, Mint maintainer Clément Lefèbvre agreed to consider building an install image using this later Linux kernel, which like 5.4 is designated LTS.

It is obvious from the above that Linux Mint is not the place to go for the latest Linux innovations. It is a conservative choice with the emphasis on presenting a simple user interface and a relatively easy transition from Windows – leaving aside details like not running Windows applications (although there is Wine).

The price of caution is lack of support for the latest hardware and while there are ways round this, it does undermine the user-friendliness for which this distribution is known. ®