The panels use Roll-Out Solar Array (ROSA) tech tested at the ISS in 2017. ROSA panels "roll open in space like a tape measure", a technique that allows for more compact designs than is possible with rigid panels.

Even with ROSA tech, installing the new panels will require three resupply missions and a dozen spacewalks. The launches will be conducted by SpaceX and start in 2021. 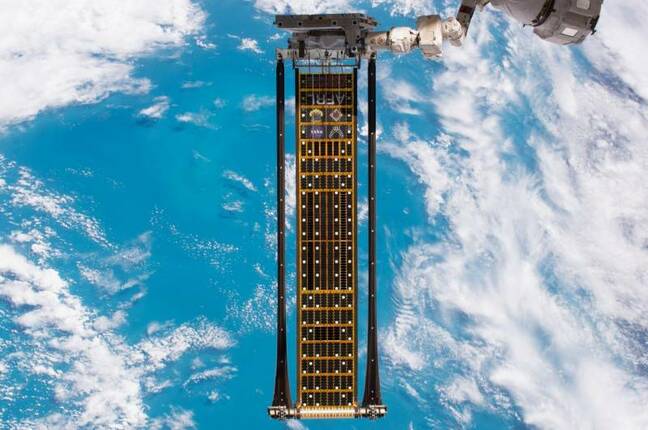 An experimental deployment of a ROSA panel in 2017. Image: NASA. Click to enlarge

The ISS currently uses eight solar panels that can generate 160kW. Those panels will remain in place and the six new arrivals will be positioned in front of their predecessors. That arrangement means the old panels' output will drop to 95kW due to shading, but the ISS will end up with a total 215kW capacity. That's a 55kW upgrade and, as solar panels become less efficient as they age, also a necessary process.

The ISS's current sun tracking, power distribution, and channelization kit will be used to direct operations of the new panels in a process NASA likened to the upgrade of external cameras on the space station.

NASA said the upgrade will ensure the ISS is ready for missions like the Artemis Moon Shot, and has the power needed for further commercial activities in space.

Speaking of which, The Register has been informed that a dozen bottles of wine are among the cargo that will return to Earth from the ISS this week. France's Institut Supérieur de la Science et du Vin will inspect the contents, which have been on the ISS since November 2020. A private tasting of the wine will be conducted in late February 2021. Sadly, the return mission scheduled for Monday has been delayed by a day. ®