A post on the Debian developer list about issues installing the operating system on a laptop sparked a debate about whether Debian's free software principles have become a blocker to adoption.

Wanting to convert his laptop from Windows 10 to Debian, Dan Pal clicked "Download" on the Linux distro's homepage. It did not install because his wireless chipset was not supported. He succeeded eventually by downloading a DVD image, but had to hunt for it. "The current policy of hiding other versions of Debian is limiting the adoption of your OS by people like me who are interested in moving from Windows 10," he said.

There is a distributable driver for this wireless card but it is non-free, which means it is not officially part of Debian. It is a good principle, but works against users if it completely blocks installation.

The issue has been debated before. "I idly wonder if we could call it firmware and call it a day. I tried to propose that a bunch of times and was not successful," said a reply to the post.

"I know someone else who said that they found finding the right ISO difficult," said another. "Windows just works, Debian is better because it respects user freedom, just sacrifice getting your network working, oh and that makes it harder to ask for help if you can't connect to the internet or local network easily." 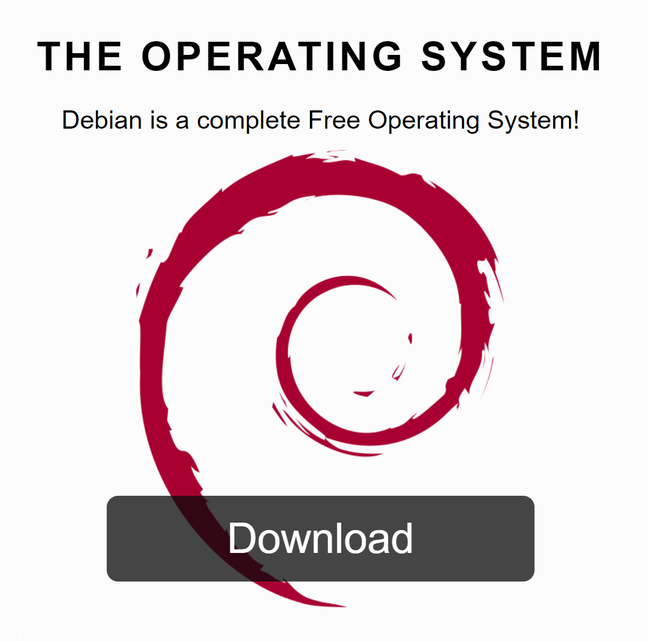 The download option on Debian's homepage includes only free software, preventing it from installing on many users' machines

The Debian project does unofficially maintain images that include "non-free firmware to make things easier on some systems requiring proprietary but redistributable firmware," but this is not linked to the homepage.

"We make an active effort to produce two different types of installation media: one that works for all users, and one broken for most laptops. Some sort of FOSS version of an anti-feature. Then we publish the broken version on the front page, and hide very carefully the version that works," observed another community member.

Not all Debian developers agreed. "The one you say 'works for all users' doesn't 'work' for me because it contains proprietary closed-source software I don't want. This boils down to a debate over whether the Debian community values convenience over ideals. It can be argued that for users who value convenience more, Ubuntu already exists. Why compete with that and compromise Debian's ideals at the same time?" said a contributor.

It is a tough problem, especially for consumer hardware. Virtual machines on servers tend to be easier. The best solution would be for hardware vendors to provide free and open-source drivers but the small market share for Debian on consumer machines, and the fact that other distros such as Ubuntu are happy to ship proprietary drivers, gives vendors even less incentive.

"We're explicit about the status of non-free drivers – the problems are that we can't fix them when they break, we can distribute them but we can't sort out any problematic behaviour. We are very dependent on others to make the fixes and have no timeline for improvements. Non-free drivers are not in our control in any way. There is no incentive on major manufacturers to change this," said a Debian developer.

There is also a contradiction in a purist approach, in that most hardware runs proprietary software, but embedded in hardware components rather than in the operating system. "I happen to strongly agree with the sharp distinction between free and non-free in the archive. But in this case, I think we should be carving out an exception," said another developer.

"If you want a softener for those rigid ideals (I need one myself), try this: these firmware blobs are peculiar. They don't run on the same CPU, we talk to them with strictly open APIs and protocols... we already talk to and depend on megabytes of non-free software to get our laptops booted, but we tolerate it because it lives in ROM.

We don't consider firmware in ROM to be part of Debian

"We don't consider firmware in ROM to be part of Debian even though it must be running for our Debian machines to run."

"Please let us treat non-free firmware as something positive, that our users need for certain hardware and not use FUD when talking about non-free firmware," said another as project members discussed how to make its download pages more easily discovered.

The inescapable truth is that an operating system you can't install does little to advance the cause of free software. ®