Fedora's maintainer for the open-source Chromium browser package is recommending users consider switching to Firefox following Google's decision to remove functionality and make it exclusive to its proprietary Chrome browser.

The comments refer to a low-key statement Google made just before the release of Chrome 88, saying that during an audit it had "discovered that some third-party Chromium-based browsers were able to integrate Google features, such as Chrome sync and Click to Call, that are only intended for Google's use... we are limiting access to our private Chrome APIs starting on March 15, 2021."

Tom Callaway (aka "spot"), a former Fedora engineering manager at Red Hat (Fedora is Red Hat's bleeding-edge Linux distro), who now works for AWS, remarked when describing the Chromium 88 build that: "Google gave the builders of distribution Chromium packages these access rights back in 2013 via API keys, specifically so that we could have open-source builds of Chromium with (near) feature parity to Chrome. And now they're taking it away.

"The reasoning given for this change? Google does not want users to be able to 'access their personal Chrome Sync data (such as bookmarks)... with a non-Google, Chromium-based browser.' They're not closing a security hole, they're just requiring that everyone use Chrome." 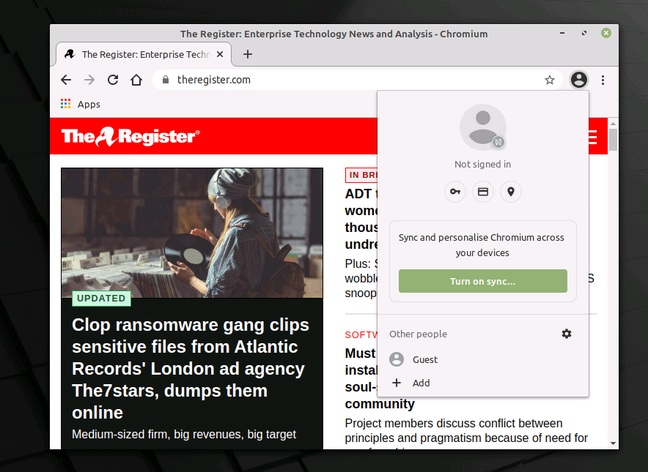 Callaway predicted that "many (most?) users will be confused/annoyed when API functionality like sync and geolocation stops working for no good reason." Although API access is not yet blocked, he has disabled it immediately to avoid users experiencing features that suddenly stop working for no apparent reason.

He said he is no longer sure of the value of Chromium. "I would say that you might want to reconsider whether you want to use Chromium or not. If you want the full 'Google' experience, you can run the proprietary Chrome. If you want to use a FOSS browser that isn't hobbled, there is a Firefox package in Fedora," he said.

There is more information about these APIs on the Chromium wiki. Access to the APIs is documented and Google's claim that it has only just "discovered" this is an oddity. The APIs cover areas including sync, spelling, translation, Google Maps geolocation, Google Cloud Storage, safe browsing, and more.

The situation has parallels with Android, where the Android Open Source Project (AOSP) is hard to use as a mobile phone operating system because important functions are reserved for the proprietary Google Play Services. The microG project exists specifically as an attempt to mitigate the absence of these APIs from AOSP.

Something similar may now be necessary for Chromium if it is to deliver all the features users have come to expect from a web browser. It is not a problem for companies in a position to provide their own alternative services, such as Microsoft with Chromium-based Edge, but more difficult for Linux distros like Fedora.

There are other ways to look at Google's move, though. "Some people might even consider the removal of this Google-specific functionality an improvement," commented a Fedora user. Microsoft reportedly removed more than 50 Google-specific services from Chromium as used in Edge, including data sync, safe browsing, maps geolocation, the Google Drive API, and more.

Users who choose Chromium over Chrome to avoid Google dependency may not realise the extent of this integration, which is likely now to reduce. The Ungoogled Chromium project not only removes Google APIs but also "blocks internal requests to Google at runtime" as a failsafe measure. ®