A new take on programming trends: You know what's not a bunch of JS? Devs learning Python and Java ahead of JavaScript

A report from an online learning platform presents a different take on programming language and devops trends, showing Python and Java ahead of the usual survey winner JavaScript.

O'Reilly veep of content strategy Mike Loukides aimed to discover "real trends" which "unfold on much longer time scales" rather than the current use snapshots in other surveys such as Redmonk's language rankings.

Investigating what people want to learn is a reasonable angle on this – especially if online learning is your business. The new report on 2020 covers "all usage of our platform, not just content that O'Reilly has published, and certainly not just books."

Loukides also gave more weight to usage than to searches. "Search data is distorted by how quickly customers find what they want," he said.

According to Loukides, online learning has boomed as a consequence of COVID-19 lockdown, with 24 per cent growth over 2019. He also said that the crisis has made more companies understand that they are to an extent online companies. "Suddenly, the ability to design, build, and operate applications at scale wasn't optional; it was necessary for survival." 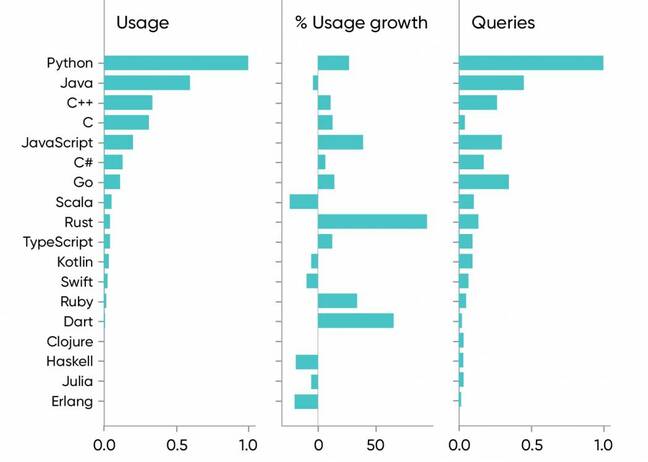 It is easy to conjecture other factors in this. Perhaps abundance of JavaScript resources elsewhere means fewer have need of O'Reilly's resources. There is also the question of depth versus ubiquity. Tools vendor JetBrains argued last year that although almost every developer needs some JavaScript knowledge, most spend more time with backend languages like Java and Python.

The O'Reilly survey also picks Go and Rust as having healthy growth, while C++ and C hold steady. C# grew a little but by less than the 24 per cent overall growth, meaning a small proportionate decline.

Loukides also reported on non-language trends, and these are just as significant. Functional programming languages are not trending up: Haskell and Erlang are both down. "The real story is the integration of functional features into procedural and object-oriented languages," he said.

There is a similar hybrid story for dynamic versus static typing, with type hinting and other static typing features added to Python, and TypeScript bringing static typing to JavaScript.

The original vision for the World Wide Web was radically empowering and democratizing ... Twenty-five years later, that's no longer true

In web development, the O'Reilly report noted a surprising "extremely strong growth" for Ruby on Rails and Django. React leads in front-end frameworks, followed by Angular. Other trends are noted, but Loukides is horrified by the way web development has become all about tools which generate screeds of incomprehensible JavaScript. "We find that chilling," he said, "The original vision for the World Wide Web was radically empowering and democratizing. You didn't need to be a techno-geek; you didn't even need to program — you could just click "view source" in the browser and copy bits you liked from other sites. Twenty-five years later, that's no longer true."

There is also a look at DevOps trends – though Loukides said that "the term DevOps has fallen on hard times," with content called DevOps declining by 17 per cent year on year. The trendy term now is SRE (Site Reliability Engineering), though this involves "similar practices."

The DevOps/SRE field as a whole is growing strongly, with high interest in version control, testing, monitoring and observability. HashiCorp's open source Terraform, which automates cloud configuration, is 53 per cent up in O'Reilly's statistics.

Containers are hot but "Docker itself may have stalled," reported Loukides. Kubernetes shows 47 per cent growth – but Loukides opined that "the desire for simpler solutions will eventually lead to higher-level abstractions," suggesting that cloud vendors who wrap Kubernetes in easy to manage solutions may win over more hands-on usage. 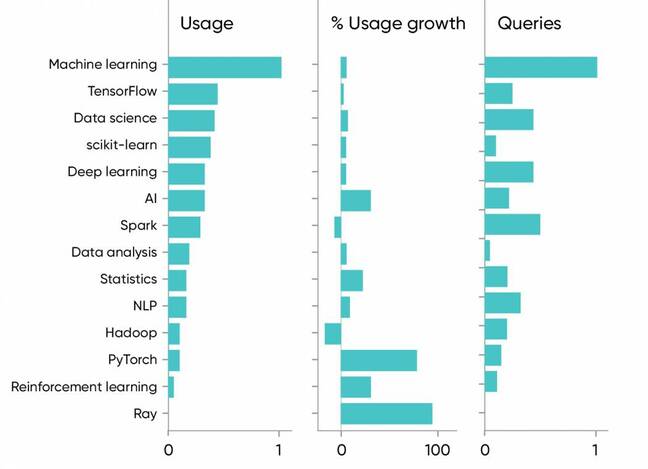 In the AI and machine learning space, Loukides identified AI as a big growth area, up 64 per cent year on year, and commented that "the future of AI is less about breathtaking breakthroughs and creepy face or voice recognition than it is about small, mundane applications."

That said, he remains adamant that GPT-3, an algorithm that generates human-like text, "has changed the world. We'll see AI being used to create fake news, and we'll find that AI gives us the best tools for detecting what's fake and what isn't."

The mainstream usage, though, is in things like medical sensors and factory quality control.

As for the tools used, the current trends put TensorFlow top, followed by Python's scikit-learn, followed closely by PyTorch. The much-hyped automated AI tools like Google's AutoML, Microsoft's AutoML, and Amazon's SageMaker "have gotten a lot of press attention … but we don't see any signs that they're making a significant dent in the market."

Any number of people have told us that they stay away from Google because they're too likely to say, "Oh, that service you rely on? We're shutting it down

The cloud story, according to the O'Reilly report, shows Amazon ahead but Microsoft and Google catching up. "Use of content about Azure shows 136 per cent growth," Loukides said.

Microsoft has "become a leader in open source," he added, thanks to cloud and GitHub, while Google's problem is not about technology but "its ability to reach customers."

Google's habit of shuttering services also counts against it. "Any number of people have told us that they stay away from Google because they're too likely to say, "Oh, that service you rely on? We're shutting it down."

Loukides is also opinionated on the matter of low-code and no-code programming – again influenced by the O'Reilly culture of democratization. "There will be a predictable backlash against letting the great unwashed into the programmers' domain. Ignore it. Low-code is part of a democratization movement that puts the power of computing into more peoples' hands, and that's almost always a good thing," he said.

The snag with all surveys is that they only reflect the views and preferences of those they survey – and despite the breadth of O'Reilly's learning platform, there is no reason to think that it attracts a neutral subset of IT practitioners.

It is also a paid-for platform in a world full of free learning resources, which skews the results. This one does better than most, though, in attempting to compare like with like and to identify trends, rather than simplistically comparing the popularity of languages and technologies that do very different things. ®