US cyber intelligence officer jailed for kidnapping her kid, trying to hawk top secrets to Russia in Mexico

A US Air Force intelligence officer who kidnapped her daughter to Mexico and attempted to defect to Russia with top-secret information is set to spend the better part of a decade behind bars.

Elizabeth Jo Shirley, 47, of West Virginia, specialized in cyber operations and worked at a range of intelligence agencies for nearly 20 years. She had stints at the NSA, the Office of Naval Intelligence, the Department of Defense, the National Cyber Investigative Joint Task Force, and the Department of Energy where she had access to classified information related to nuclear weapons.

This week she was sentenced to 97 months in prison for unlawfully retaining documents containing national defense information, and 36 months for international parental kidnapping, having admitted both charges back in July. 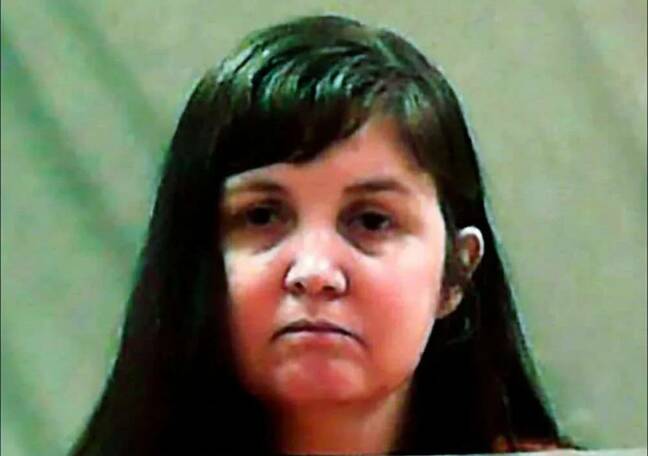 According to court documents [PDF] her unusual story started in July 2019, when she fled her Hedgesville home and flew to Mexico City where she contacted the Russian embassy, offering classified documents that she had removed from secure locations over the past 20 years. In return she wanted money, resettlement in a country that would not extradite her to the United States, and new identities for herself and her daughter in tow.

According to prosecutors, Shirley left the country with a wealth of electronic devices: one laptop computer, two tablets, five cell phones, four mobile phone SIM cards, three external hard drives, four thumb drives, and nine SD cards. She also brought with her identity documents and proof of her work in the intelligence community.

It’s not clear how far she got with her plan before she was caught. She was in Mexico City for nearly a month before she was arrested, and the Feds provided some details that suggest she may have been partially successful: when arrested she was “in possession of handwritten notes listing the names of individuals working at the Russian Embassy in Mexico City. Next to the names, the notes listed times, such as 9:30 am to 12:30 pm. The notes also included the addresses of the Russian Embassies in Cuba and Panama.”

Prosecutors also provided details of what they say were “draft messages” found on her phone. One, clearly intended as an introductory message read: “Read Me First. For the Rezident. You have a virtual walk-in. Please consider my request seriously. Americans would never dangle their top Intelligence Community [Country A] Cyber expert and her child. I think that after reviewing my credentials ... you will be pleasantly surprised. You can polygraph (box) me and debrief me at length.”

When it comes to privacy, everyone says America needs a new federal law ASAP. As for mass spying, well, um… huh what’s that over there?

Most of the court documents are, however, sealed or unavailable, highlighting the national security aspect to the case.

It was Shirley’s effort to bring her six-year-old daughter with her that first tipped off the authorities that something was up. She is separated from her daughter’s father, who is also the primary parent. She was due to meet his wife on Friday, July 19, and hand over her daughter but she said she was having car trouble and couldn’t meet up. In fact she was driving to Baltimore-Washington International to catch a plane to Mexico City.

The next day, when Shirley again failed to turn up, the father grew distraught and when the Family Court opened that Monday, he filed a motion for the immediate and exclusive custody of his daughter, which was immediately granted, but by then she and her mother were trying to make contact with the Russian embassy in Mexico City. By Wednesday, the daughter was reported missing in the States, and the next day, a criminal complaint was lodged against Shirley for “concealment of a minor child from a custodian.”

In the meantime, alarms had presumably gone off within the intelligence services over their missing employee. It’s safe to assume that as a cyber specialist, Shirley was able to hide her tracks but there is no indication that she has experience of working in the field, and compared to Edward Snowden’s carefully planned exit from the NSA with secret documents, it appears to have been a somewhat amateurish attempt to evade detection.

Prosecutors clearly imply that Shirley had stashed more classified information in a storage unit near her home in West Virginia by revealing that she had drafted a message to the Russian embassy asking for help importing her possessions “including reference materials, papers, and computer work files related to her previous work, which needed to be shipped urgently so they were not confiscated before they could be retrieved.”

Five days after her arrest, the storage unit was searched and court documents note that she had visited it “immediately before beginning the trip to Mexico City with her daughter.” Search warrants for all of her devices and residences revealed, according to prosecutors, three key documents.

The most significant was a hard copy of a top secret NSA document “outlining intelligence information regarding a foreign government’s military and political issues” that “cause exceptionally grave damage to the national security of the United States.”

It is a virtual certainty that these three documents are only representative of many more documents that she possessed and had made plain would be willing to hand over to the Russian government in return for money, a new identity and passage out of Mexico.

The judge did, however, decide that the sentences should run concurrently and that she would be given credit for the 18 months she’s already served, meaning that she could be out in five years as opposed to eight.

“Shirley betrayed the trust of the American people when she took classified information from her work with the Intelligence Community,” said the National Security Division assistant attorney general John Demers. “She then sought to profit from her betrayal by seeking to sell this information to Russia, one of America’s foremost adversaries, in order to further her criminal abduction of her daughter. This sentence will hold Shirley accountable for her violations of the American people’s trust, and serves as a warning to others who would seek unlawful profit at America’s expense.”

The lawyer in charge of case, US Attorney Bill Powell was similarly unimpressed saying that she “deserves her sentence and not a day less.” And the FBI agent that chased her down, Michael Christman, said that she had “betrayed that trust and put our country at risk.”

We don’t know what Elizabeth Jo Shirley’s motivation was for throwing away her life and career and betraying her country. If it is in the court documents somewhere, they are currently sealed and she has signed a document promising not to disclose a word of what was contained in the documents she stole for the rest of her life, or face the rest of it behind bars. ®