Cisco reckons it has invented "a whole new category of switches" called "micro-switches".

Switchzilla suggested fibre-to-the-desk makes these devices sensible because it means you can run a connection all the way from one really big aggregation switch to a desktop or other device, instead of needing to put intermediary switches and distribution frames in different spots around your office.

Cisco also reckoned that if you're going to put a switch on your desk it needs to be quiet and small so the devices are fanless and the smaller models are 4.55cm x 9.0cm x 7.88cm – not much bigger than stack of five smartphones!

The manufacturer said that once you pop a powered device on a desktop it might as well share some juice with other devices so one model includes USB-C to keep your laptop alive. All three devices in the range offer power over Ethernet. 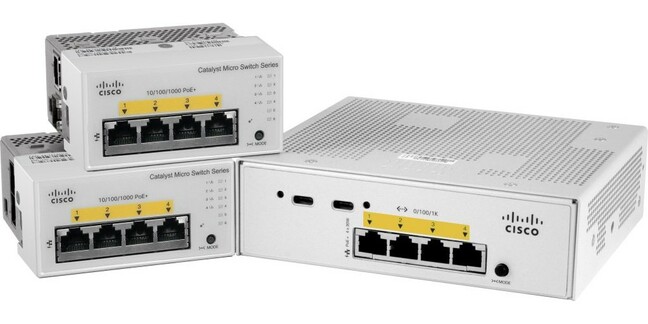 Gigabit Ethernet is standard across the three models in the range, which should suffice for an awful lot of workloads.

The devices have been included in Cisco's flagship Catalyst range, can be managed by DNA Center and get the full "intent-based networking" treatment that Cisco advocates as the clever way to get all the benefits of software-defined networking without having to wrap your head around a pure-play stack.

Cisco said the devices can do duty beyond the desktop, suggesting cable ducts as a possible location and even offering a mount designed to fit on a din rail – a standard fitting found in all manner of equipment racks.

Cisco has not revealed pricing for the devices but they are on sale now. A data sheet can be found here.

Perhaps curiously, Cisco hasn't explained why you'd run fibre to the desktop and splash down a presumably not-inexpensive device when Wi-Fi gets more reliable every year. Some of the company's marketing guff suggests one reason by depicting the switches deployed in scenarios such as hospitals where the equipment they connect may benefit from the solidity of a wired connection. ®