Samsung Galaxy S21: Lots of little downgrades, but this phone is more than the sum of its parts

Review The Samsung Galaxy S21 is not a particularly ambitious phone. There’s nothing novel or provocative about it. It’s a flagship, yes. But it’s also a fairly conservative one, faithfully sticking to the paths trodden by its predecessors.

That sounds like a complaint, but believe me, it isn’t. Although Samsung repressed its playful side when designing the S21, we’re left with a phone that’s got more polish than a B&Q warehouse, and delivers everything you’d want from a flagship.

What's in the box?

There are two versions of the Samsung Galaxy S21 5G. Where you live determines what flavour you’ll get. In the US, as well as China and South Korea, the phone uses Qualcomm’s Snapdragon 888 chipset.

In other markets, including the UK, Samsung’s own Exynos 2100 platform runs the show. 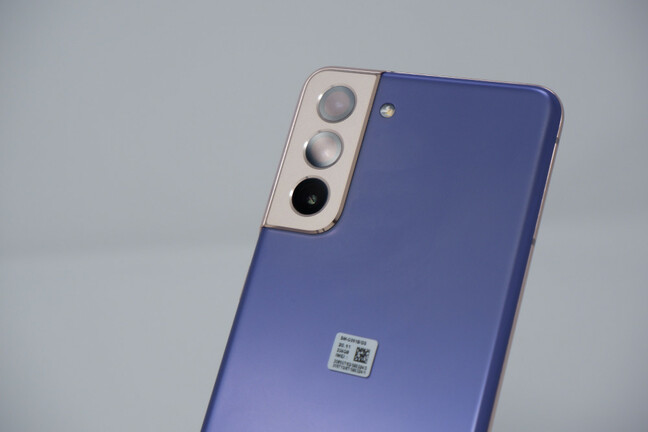 This review is based on an Exynos model provided to El Reg earlier this month, configured with 8GB RAM and 256GB storage. While our critiques should broadly apply across both variants, we feel it’s important to mention there will be some inevitable differences, especially when it comes to things like battery life and performance.

We haven’t been able to contrast either variant, and as such can’t independently determine what direction the pendulum swings. Therefore, if you’re in a market where Samsung is using Qualcomm’s silicon, you might want to read another review. After you’ve finished reading ours, that is. 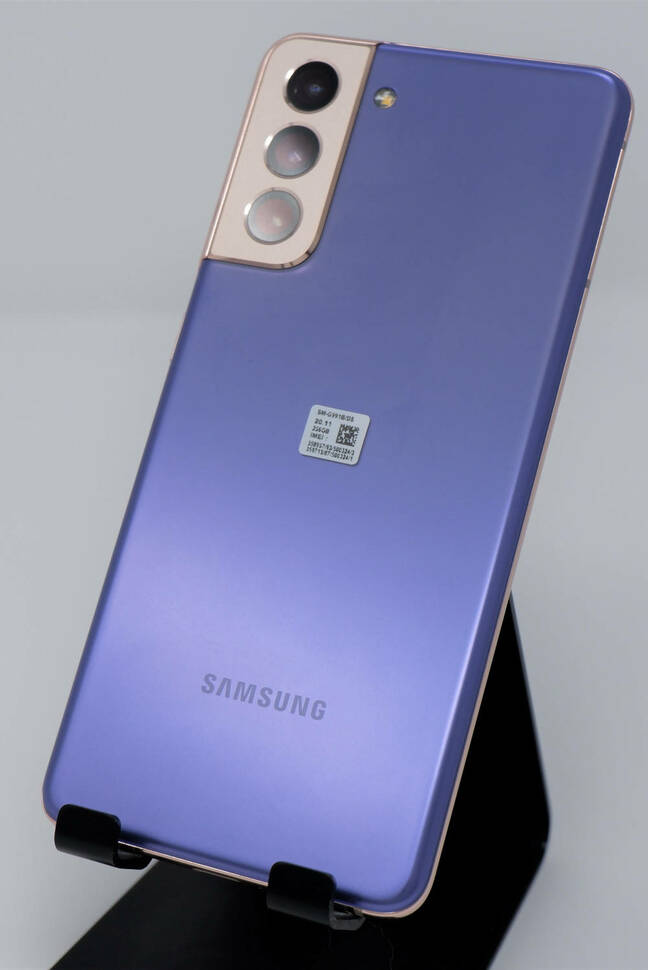 This reviewer has always thought it’s a bit pointless poring over how a phone looks. If you’ve got an ounce of sense, you’ll shove your phone in a protective case the moment it arrives. You almost feel bad for those working on the furnace of industrial design at places like Samsung and Apple. All that hard work, only to see it hidden within the thick Kevlar of an Otterbox case.

Still, for those who like to live dangerously, the Samsung Galaxy S21 looks a treat. The most noticeable difference is how “flat” it feels. That sounds like a bad thing, but it really isn’t. The rear camera bump is perceptibly thinner. The screen uses normal, flat glass rather than 2.5 glass that’s designed to give a curved appearance. Samsung also ditched the fragile glass backplate in favor of hardier textured polymer.

The end result is a phone that feels lighter and airier and is more durable, albeit slightly less “premium.” I’d argue that’s a trade-off worth making, even when you consider the £800 cost of this handset.

As someone used to larger phones, the Galaxy S21 feels tremendously dainty, measuring just 6.2 inches, and with a tall 21:9 aspect ratio. It’s noticeably thinner than the iPhone 11 I use as my daily driver. 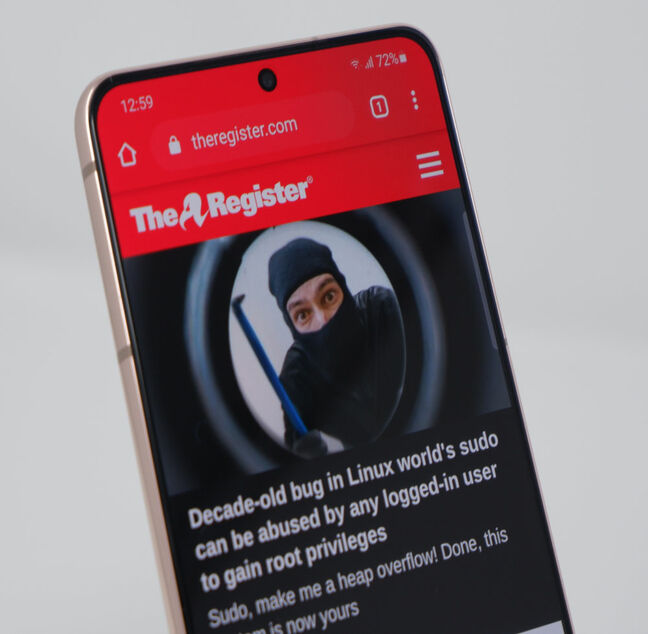 The display uses a Dynamic AMOLED panel, which delivered excellent brightness and colour fidelity. You get none of the dullness of an ordinary LCD panel. Black tones are so dark, Anish Kapoor may want to patent them. The maximum refresh rate is 120Hz, with Samsung’s software automatically adjusting based on power needs and the application being used.

The Galaxy S21 5G uses a FHD+ resolution (2,400x1,080), which is a drop from the QHD (1,440 x 3,200) panel on the previous Galaxy S20. This is a bit of a downgrade, but in reality, it’s pretty hard to tell the difference. The S20 was limited to 60Hz in QHD, too, unless you used a third-party workaround, so it's entirely plausible a big chunk of people never actually took advantage of it. The Galaxy S21 has a lot of little downgrades dotted around the place, and in practice, they don't change much.

Samsung offers the Galaxy S21 in a range of colours: Phantom Gray, Phantom White, Phantom Pink, and Phantom Violet. Our review model came in the latter scheme. The backplate looks like what would happen if you melted a packet of Parma Violets with Nigel Farage’s tie, and it’s surrounded by a rose gold (or “copper” if you’re old) trim. Adorning the side is the phone’s power button, as well as a volume rocker. There’s no dedicated camera or assistant button to speak of, nor a physical fingerprint reader.

At the bottom, you’ve got a USB-C port for charging and connecting peripherals, should you decide to use the DeX desktop environment. You’ll also spot a single loudspeaker, as well as the phone’s SIM tray. Predictably, there isn’t a 3.5mm headphone jack, although you wouldn’t really expect one, given Samsung bid adieu to wired audio on last year’s model.

There’s also no MicroSD slot in the SIM tray. This marks the first Galaxy series to ditch expandable storage. And while it would be easy to paint this as yet another example of a phone vendor killing a popular feature, it’s a bit more complicated than that.

Like its predecessor, the Galaxy S21 can record video at bonkers 8K resolutions, which can measure as much as 600MB per minute of filming. If you try to save that to a cheapo MicroSD card, you’ll potentially encounter performance issues. Separately, services like Netflix and Spotify have made extensible storage less of a pressing concern. Many of us are no longer carrying massive iTunes libraries with us. It’s all in the cloud.

Samsung’s Galaxy flagships have always performed well on the photography front. That said, don’t expect any real leaps in performance this year, with the S21 using the same optics as its predecessor. There’s a 12MP primary sensor, paired with a 64MP telephoto lens and a 12MP ultra-wide. 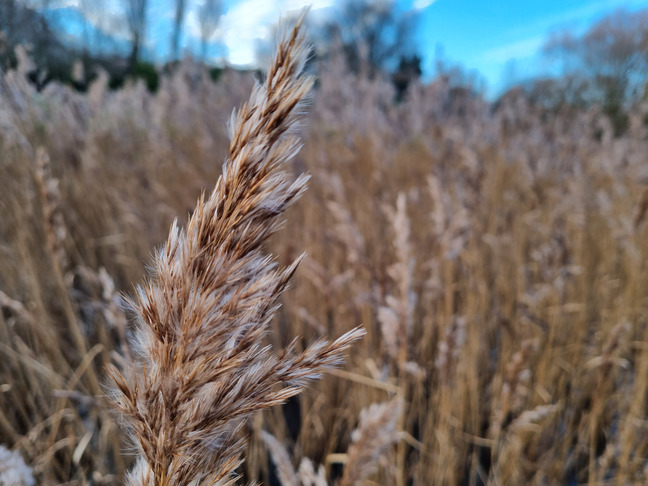 Instead, Samsung decided to put its focus on the software, adding new shooting modes. These are largely pointless quite niche, and won’t be of much interest to the average phone buyer. Vlogger mode, for example, lets you record using the front and rear cameras simultaneously. Another feature, called Director’s View, lets you record from multiple lenses simultaneously, switching between them on the fly.

Still, even without any major changes, the Galaxy S21 is an excellent camera phone, with the primary sensor the obvious star of the show, capturing vibrant and detailed photos. We were especially impressed with close-range performance, with the S21 able to capture fine details while also producing bokeh effects that didn’t appear artificial. 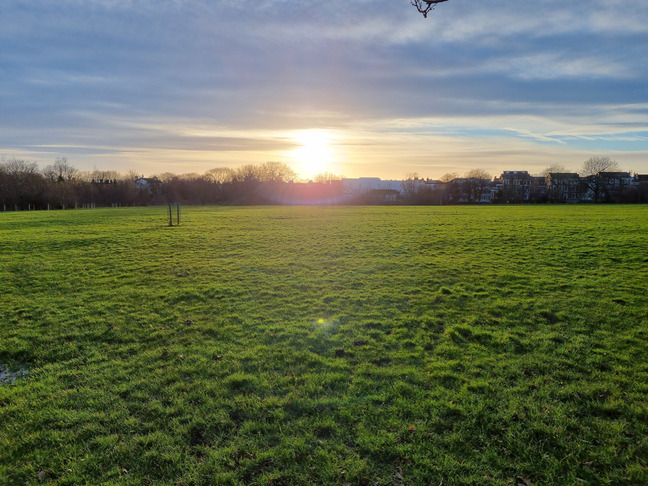 The telephoto lens is also handy at capturing shots from a distance, with 3x optical zoom and up to 30x digital “space” zoom. Still, colour fidelity and brightness didn’t quite match what we got with the smaller 12MP lenses.

I do want to give Samsung credit for its camera app, which is one of the cleanest in the game. Yes, there are a lot of shooting modes, straddling both video and still photography. But they’re kept well out of the way until you actually want to use them.

The Exynos and Snapdragon variants both come with different ISPs (image signal processors), and may diverge slightly in performance. Future software updates may also have an impact on image quality, as was the case with last year’s Galaxy S20 Ultra 5G.

Samsung has staked a lot on the Exynos 2100. Historically, its own-brand silicon fared poorly against the equivalent Qualcomm Snapdragon platform, both in real-world and synthetic tests. Samsung is keenly aware of this perception, as demonstrated by the tagline “Exynos is back,” which accompanied the 2100’s launch earlier this month.

For reasons mentioned previously, we’re not in a position to contrast the Exynos and Snapdragon variants of the Galaxy S21, although we’d happily concede this phone is powerful enough for most users, with slick multitasking and day-to-day performance. It didn’t break a sweat while running apps in Multi Window Mode (or, in normal parlance, split screen), and Chrome and YouTube both chugged along nicely in tandem, with the only hindrance the relatively small display. Gaming also proved delightfully fluid, particularly when dabbling in more visually intensive shooters.

The Galaxy S21 5G runs Android 11, skinned with Samsung’s own OneUI 3.0 environment. Those who haven’t used a Samsung phone since the TouchWiz days have nothing to fear here: it’s pretty good. Stock Android purists may grumble, but there’s a lot we like, from the customization choices, to how it handles notifications.

Fair warning: There is a significant amount of bloatware included. Most of it amounts to Samsung’s homespun alternatives to Google’s apps, like the Galaxy Store app marketplace, or Samsung Internet. There’s also some third-party bloat, with several Microsoft products pre-installed, including LinkedIn and OneDrive. These can be easily hidden or deleted, but are nonetheless a bit annoying if you’re used to relatively untouched Android experiences.

The Galaxy S21 has a 4,000 mAh battery, which comfortably lasted around 36 hours with moderate use (which is admittedly somewhat of a subjective term). There’s 25W fast charging, which isn’t the fastest on the market, but nonetheless delivered around 50 per cent in half an hour. Not bad, but not exceptional.

You can see why Samsung would stick to a lower speed. After a certain charge point (usually around 80 per cent), speeds plummet as a safety precaution. Fast charging isn't great for the phone's battery in the long-term, either, and limiting speeds is a great way to give a bit more longevity.

You’ll have to buy your own charging brick, sadly, as Samsung has followed Apple’s lead in excising them, along with the previously bundled headphones. Fortunately, wireless charging is present here, which makes up for the BYOB (bring your own brick) approach.

The Galaxy S21 doesn’t give those with the previous generation much impetus to upgrade. Some areas see a downgrade compared to its predecessor, particularly when it comes to the display resolution, build, and the absence of MicroSD. Other areas have remained fairly constant, with the cameras largely unchanged.

Still, I don’t feel like the S21 is really intended for power users, or those desperate to hang on the bleeding edge. Everything it does, it does well: from day-to-day use, to battery life and photography. OneUI is excellent. There are no glaring omissions, like wireless charging. But it doesn’t really take any risks, either.

In that respect, it’s very similar in outlook to the iPhone 12. It’s a mobile for (well-heeled) normal people, who want a phone for normal reasons, and want it to work well. And priced at £769.99, it’s well worth it. ®