Facebook has created a new screen in its iOS app that will urge people to allow it to continue stalking their online activities for targeted advertising.

This is in response to Apple preparing to introduce a prompt that asks users whether or not they want to grant Facebook's software permission to track them when they use other apps and websites. This choice was due to arrive in an iOS 14 software update though it was delayed after the iGiant said it wanted to give developers more time to get their heads around the change.

If permission is granted, Facebook's app can access what Apple calls its Identifier for Advertisers – a unique per-user ID that can be used to identify and track you from app to app and website to website on iOS, allowing the antisocial network to build up an idea of your interests so it can target you with ads tailored for you – ads you might click on more than random ones. Without this permission, Facebook loses this ability to easily follow iOS users around the internet.

Until now, iThing owners have been able to opt out of being tracked by their Identifier for Advertisers, or IDFA, by delving into their system settings and switching it off. Soon, Apple is going to make it opt-in rather than opt-out: Facebook and any other app that wants to use the identifier has to get permission from the user on a per-app basis.

Here's what that message from Facebook will look like, below left, and Apple's explicit permission prompt appearing on top, below right: 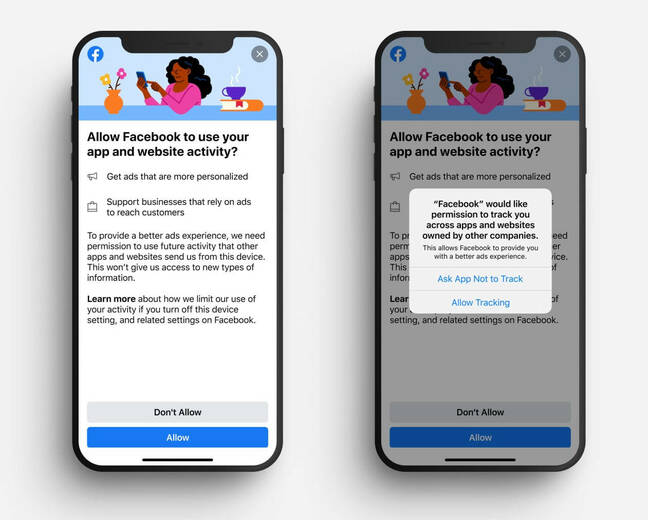 “Apple’s new prompt suggests there is a tradeoff between personalized advertising and privacy; when in fact, we can and do provide both,” Facebook insisted in a statement. “The Apple prompt also provides no context about the benefits of personalized ads.”

In effect, Facebook and Apple are going to have a war of words on punters' phones, with Facebook urging folks that tailored advertising is useful, particularly for Facebook's bottom line, and Apple giving its fans the option of staying the hell out of Mark Zuckerberg's sights for even just a few minutes of the day.

“Agreeing to these prompts doesn’t result in Facebook collecting new types of data," Team FB added. "It just means that we can continue to give people better experiences. We feel that people deserve the additional context, and Apple has said that providing education is allowed."

This also comes after Apple put privacy warning labels on software in its iOS app store, which revealed – for instance – the incredible amount of info harvested from devices by Facebook's software. Apple's user privacy manager Erik Neuenschwander compared these to food labels. "For food, you have nutrition labels; you can see if it's packed with protein or loaded with sugar, or maybe both, all before you buy it," he said. "So we thought it would be great to have something similar for apps."

A Facebook spokesperson told The Register that it did not know when it expects to roll out its ad-tracking messages for iPhone users, and is right now just testing the feature. Presumably Facebook is waiting for the opt-in dialog box to appear in iOS. Apple was not immediately available for comment. ®