Also: NASA to use SpaceX's Falcon Heavy for the Lunar Gateway while eyeing another seat in a Soyuz

In Brief Typical. You wait years for missions to Mars and then a whole bunch come along at once. Less than a day after the Emirates Mars Mission dropped into Martian orbit, China's Tianwen-1 has followed suit and NASA will be arriving shortly.

Tianwen-1 is, however, an entirely different beast to the UAE's "Hope" probe. The China National Space Administration (CNSA) mission intends to deposit a lander and a rover onto the surface, which will make China the third country to achieve a successful landing (unlike ESA's Beagle 2 and Schiaparelli landers – the former never phoned home and the latter crashed).

Unlike the glossy stream that accompanied yesterday's events, tracking the progress of Tianwen-1 proved tricky. Enthusiasts turned to antennas collecting telemetry from the spacecraft to spot when the engines were fired up and again when the signal reappeared as the Tianwen-1 rounded the planet.

Chinese news media later confirmed that the probe was indeed safely in orbit around Mars. 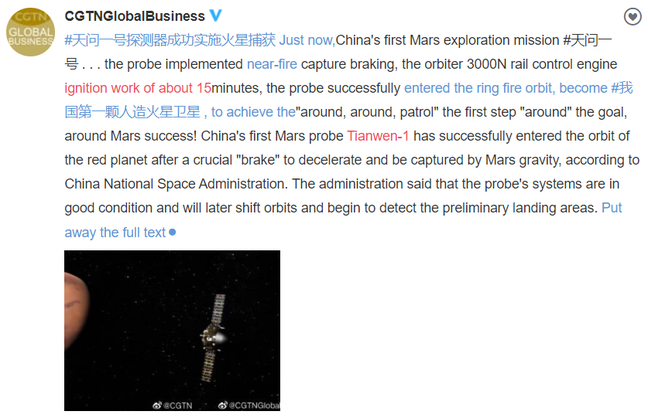 Scientists will spend the next month or so checking out the spacecraft's systems and picking a landing location ahead of an attempted touchdown of the probe's lander and rover between May and June 2021.

SpaceX Falcon Heavy to take NASA back to the Moon

With a certain inevitability, NASA has announced that SpaceX's Falcon Heavy will provide the lifting necessary to send the first components of the agency's Gateway space station to the Moon.

NASA has selected Falcon Heavy to launch the first two elements of the lunar Gateway together on one mission! https://t.co/3pWt0GMS4v pic.twitter.com/QzPtIYHeuF

The rocket, which first saw duty lobbing Elon Musk's Tesla Roadster into space, will launch no earlier than May 2024 from LC39A at the Kennedy Space Center. It will carry the Power and Propulsion Element (PPE) and Habitation and Logistics Outpost (HALO) for the station, which it is hoped will serve duty as a staging post for astronauts on the way to the lunar surface.

The HALO will provide pressurised living space while the PPE features a 60-kilowatt solar electric propulsion system that will be able to move the Gateway into a different lunar orbits. The PPE will also provide power, communications, and attitude control.

That's quite a bit less than NASA's heftier Space Launch System (SLS), which has yet to leave the pad, can handle. Its contribution to the agency's lunar ambitions will be, at least initially, launching the Orion capsule to ferry astronauts to the gateway.

The launch of crews to the International Space Station (ISS) from US soil for the first time since the retirement of the Space Shuttle was greeted with delight by many observers. No more would the US have to rely on Russian rockets to keep astronauts on the outpost.

SpaceX has conducted the first operational mission in the form of Crew-1 and the next mission, Crew-2, is due for launch in the coming months. Boeing's Starliner is also expected to begin transporting astronauts to the ISS once it completes a repeat of its uncrewed demonstration mission.

Spotted by NASAWatch, the agency has posted a notice regarding the transportation of a US astronaut on a Russian Soyuz vehicle in the April/May 2021 timeframe.

NASA has no more Soyuz seats lined up. The last US astronaut shoehorned into the Russian capsule was Kate Rubins, who is due to return to Earth via Soyuz in April. The SpaceX Crew-1 capsule is also expected to return between late April and early May.

A planned end of April launch for Crew-2 appears to have triggered the jitters. Should the SpaceX mission be delayed, NASA would find itself with no astronauts aboard the ISS to tend the US segment of the outpost.

NASA is keen on redundant systems. Indeed, having both Boeing and SpaceX operating simultaneously would give the agency the dissimilar redundancy it craves. Once that final Soyuz astronaut returns, it will be solely dependent on SpaceX.

But how to pay for it? "In consideration for this supplemental crew transportation service, NASA is considering providing similar in-kind services."