Rethinking the desktop with reference to Apple's early UI guidelines

Updated A pre-alpha project to make a new FreeBSD-based desktop operating system has adopted a minimalist design intended to appeal to Mac defectors.

FreeBSD is a Unix-like operating system first released in 1993 based on the Berkeley Software Distribution. The core of Apple's macOS, called Darwin, uses some code from FreeBSD. Despite its high quality, running FreeBSD as a desktop operating system has some challenges, mainly because it is less well supported by third-party vendors than Linux, which in turn is not as well supported as Windows.

Simon Peter, based in Frankfurt, Germany, founded a project that may make desktop FreeBSD more attractive. Peter is the author of AppImage, a packaging format for portable applications on Linux. He is now working on helloSystem, which uses FreeBSD coupled with a new user interface developed with Qt to create a desktop operating system focused on ease of use.

'Pull-down menus are superior to any other kind'

The system is intended to be Mac-like in its design. "We are not aiming to create a 1:1 replica, but something that is generally consistent with the underlying general user experience (UX) philosophy, which has been openly documented," the docs stated. It is not just a personal project; the acknowledgements show a number of others from the FreeBSD community who are contributing.

This philosophy includes a global menu bar, with reference to the Macintosh Human Interface Guidelines and the declaration that "pull-down menus are superior to any other kind."

The system is "designed with simplicity in mind" and to be welcoming to Mac users but "10x as simple." Qt was selected because of its wide use in cross-platform applications. "Philosophically, we would prefer to use something BSD licensed (or similar), such as FyneDesk," the docs said.

As you would expect from the creator of AppImage, application bundles play a part in the helloSystem design. The OS supports "simplified GNUstep-style .app bundles," according to the docs, where GNUStep is a free software clone of NeXT's workspace manager.

NeXT is also part of the Mac's history, being the operating system developed under Steve Jobs' leadership when outside Apple, and later part-incorporated into macOS when Jobs returned. There is also support for ROX-style bundles, ROX being another open-source packaging format, and for wrappers that allow traditionally installed applications. 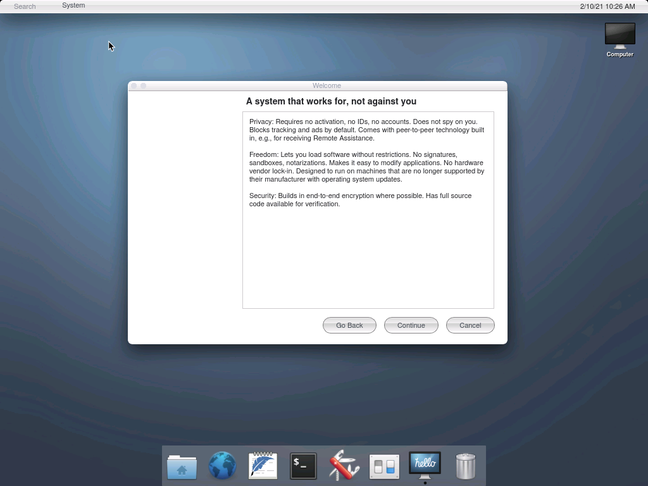 We downloaded the pre-alpha helloSystem installer and ran it in a Hyper-V virtual machine on Windows, with some success. The system echoes macOS in some respects, with Mac-style window icons, a global system menu, and a dock.

The welcome dialog said: "A system that works for, not against you" and referenced the benefits of privacy (no activation or registration), freedom (load software without restrictions) and security: "Builds in end-to-end encryption where possible. Has full source code available for verification."

The file system is OpenZFS. 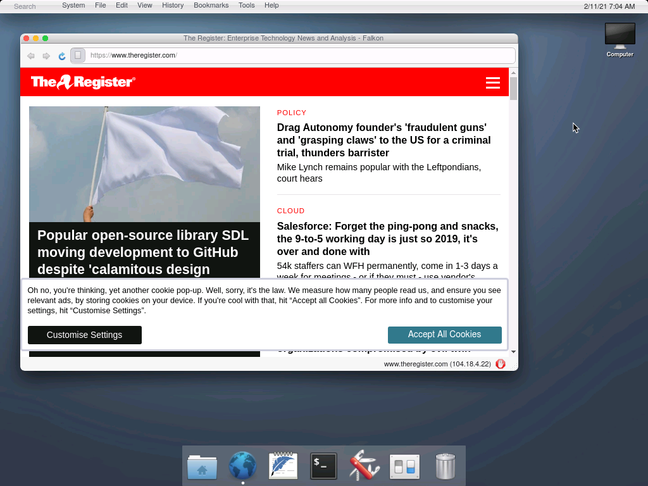 Up and running with helloSystem

Not much software is installed on first boot, but applications such as the Falkon web browser (as used by KDE, also Qt-based) download and install on demand. Considering its pre-alpha status, quite a few applications are supported, including LibreOffice for office productivity, GIMP and Inkscape for graphics, Audacity for audio, OBS Studio for video, and so on. The minimalist user interface is more reminiscent of older versions of macOS rather than that of today.

No surprise then that Peter wrote a piece on bringing back "the ease of 80s and 90s personal computing," opposing today's computing environment on the basis of complexity, lack of privacy, and lack of control, arguing for "a lightweight system in which the user can know and understand (at least at a high level) all components of the system and is in the driver seat." 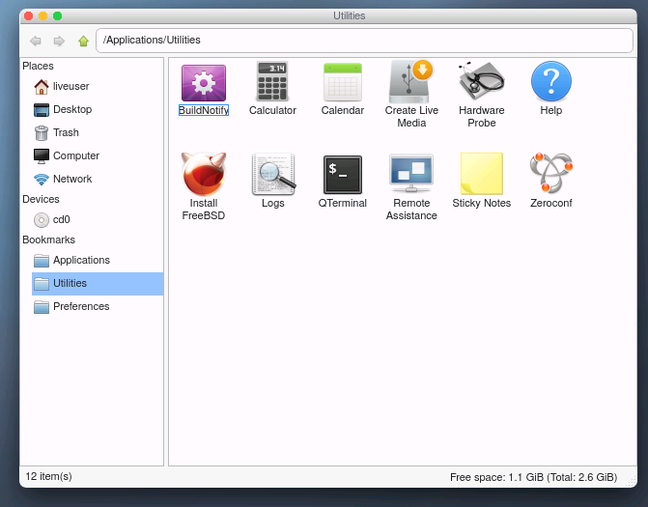 Applications and utilities in helloSystem

Peter insists that helloSystem is not just a skin that looks like macOS, nor is it a copy. "Design is how it works, not just how it looks. helloSystem is loosely following some Mac philosophies and concepts, but the implementation is entirely different (largely based on Qt)," he said on Twitter.

Current system requirements are an Intel or AMD 64-bit processor and 4GB RAM. What about 32-bit? "Currently we provide only amd64, and since the Live ISO needs at least 4GB RAM that's probably the showstopper for many 32-bit machines anyway. But we hope to lift the RAM requirement, and then build 32-bit images as well if there is demand for them," Peter added.

There is no timeline offered even for a beta release and it's likely that whether and when the project comes to fruition will depend on attracting more contributions – the place to start being the GitHub repository.

The helloSystem OS is thought-provoking on several levels. What if an open-source operating system could achieve better usability and design by following some of the same principles used by Apple?

While only a few are likely to switch from a Mac, there are plenty who would like Apple usability at a lower cost. The helloSystem is small and early, but an intriguing experiment. ®

We asked Peter whether he worries about legal objections from Apple. "helloSystem is not using any 'secret sauce'," he told us. "It does share some open-source code with the Mac (namely, FreeBSD and CUPS), but everything else is put together independently from existing and new open-source components. Other systems out there resemble macOS much more closely in terms how they look (e.g. many themes for Linux desktops) and how they are implemented (e.g. GNUstep). helloSystem is mainly about how it feels.

"To that end, helloSystem loosely follows some basic user experience recommendations laid out publicly in books as early as the 1980s and '90s, but reinterprets the general ideas very liberally, especially given all the progress in computing in the last four decades. By basing helloSystem on FreeBSD we also want to see whether we can avoid some of the Desktop Linux Platform Issues... 1,001 distributions, all more or less the same but all with slightly different breakages."

He added: "There is no set date for 1.0. The objective for 1.0 is roughly that you can put it on a casual user's 10-year-old Mac and have them use it for basic tasks without being all too confused."

What about lack of drivers for PC hardware? "Chicken-and-egg problem," he said. "The more FreeBSD gets used on the desktop, the more drivers there will be. But already today, driver support is much better than people might suspect. You do need to check hardware compatibility and pick devices accordingly. We are looking into establishing some reference hardware platforms."