Happy ENIAC Day! Join us for a celebration of the 75th anniversary of the launch of the Electronic Numerical Integrator and Computer.

Yes, we know that things actually kicked off in 1945 rather than 15 February 1946, but today's the day when, 75 years ago, the machine was launched at the University of Pennsylvania. In 2011, Philadelphia City Council declared 15 February as "ENIAC Day" and we're not about to argue the point for fear of a battering with delicious cheesesteak sandwiches.

While boffins in Blighty might point to the super-secret Colossus as predating ENIAC, the launch of this general-purpose computer was very much a public affair. Intended as an improvement on the wheel-and-disc-based differential analysers of the time, work on the electronic machine began in secret in 1943. 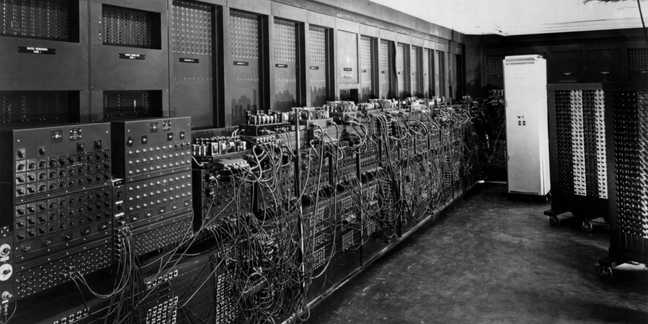 The first iteration was complete by the end of 1945, and the performance jump when compared to what had gone before was breath-taking. The 30-ton, 680sq ft computer was capable of performing a ballistics calculation that might have take 12 hours previously in a mere 30 seconds. Unsurprisingly, it spent the vast majority of its operational life as the primary computing engine for the US Army.

As well as ballistic trajectories, it also saw service in solving atomic energy problems for the Manhattan Project and the design of wind tunnels.

The statistics are eyewatering for those used to the compact and power-sipping systems of recent years. ENIAC had its own power lines and consumed 150 kilowatts of electricity. Predating the era of microprocessors, it was made up of 40 nine feet tall (and two feet wide) panels, arranged in a U shape, and required 18,000 vacuum tubes (which had a habit of blowing), half a million soldered joints, 70,000 resistors and 10,000 capacitors.

It also needed to be programmed manually for each new set of calculations, a lengthy task involving setting switches and cables. Debugging involved stepping through programs one instruction at a time; a technician carried a hand-held box with a button that allowed the computer to move to the next step and the result compared with a calculation by a human.

Changes were made in 1948 to add a stored-program capability in order to greatly ease the pain and a one-hundred word magnetic core central memory unit was installed by Burroughs Corporation in 1953.

By 1955, however, the writing was on the wall as advancements in computing rendered the ENIAC obsolete and the beast was finally shut down.

So please join us in raising a toast to the ENIAC and the debt owed to it by the computers of today.

The history of the ENIAC is well documented, but we'd recommend Kevin Richey's The ENIAC for a lunchtime read as well as the entry in Penn Engineering's History and Heritage section. The two don't always match up (Richey lists 42 panels and over 19,000 vacuum tubes while Penn talks of 40 and 18,000, for example) but both give a flavour of its scope. ®