NASA just now successfully landed Perseverance, its largest and heaviest rover yet, on the surface of Mars in the Jezero Crater. The machine will conduct the ambitious mission to finding ancient microbial life on another planet.

"Touchdown confirmed. Perseverance has touched down on Mars," Swati Mohan, Navigation and Control Operations Lead of the Mars 2020 mission, said moments ago on NASA's live-streamed coverage of the landing, just before mission control erupted in applause. 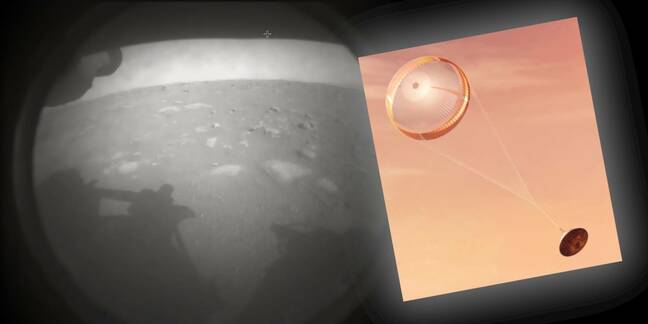 Perseverance's first image beamed back from Mars upon landing, and inset: an illustration of it parachuting down to the surface. Click to see larger version of first photo. Credit: NASA/The Register

After cruising though space for little over seven months, Perseverance entered its entry, descent, and landing stage, also fondly known at NASA as the seven minutes of terror.

"That's the time it takes for the vehicle to make it from the top of the atmosphere on Mars down to its surface," Michelle Munk, a Systems Capability Lead for Entry, Descent, and Landing at NASA, told The Register. "It basically has to go from about 12,000 miles per hour (~5364 metres per second) to zero in a short period of time. Many things can go wrong during this process."

The rover's aeroshell, a protective casing holding the machine, ripped through the Martian atmosphere at about 5,300 metres per second when it was 120 kilometres from the alien dust world's surface. It was eventually slowed by atmospheric friction, and once it reached a steady pace of about 550 metres per second, it deployed its giant supersonic parachute to further decelerate the vehicle as it continued to descend 15 kilometres above Mars.

Next, the heat shield was ejected giving some of Perseverance’s onboard cameras and radar a clear view of the Martian ground getting closer and closer. Armed with a new type of landing technology, known as Terrain Relative Navigation, the rover could estimate its position relative to the ground and automatically steer itself away from hazardous areas.

Specifically, Perseverance used its radar to gauge its distance to the surface, and as it descended, it snapped photos of the landscape below. Thanks to the Mars Reconnaissance Orbiter, the rover's landing site – the Jezero Crater – has been mapped, and Perseverance compared its live feed with the orbiter-captured data stored in its computer to identify the best, safest landing site. "Landing in this terrain is very challenging, you're right next to 100-metre high-cliffs," Munk said.

Once it was close to an ideal flat landing site, it jettisoned its parachute and shed its ablative shell. At this point, its descent stage, a robotic jet-pack-like assembly connected to the rover with wires, ignited a set of rockets to gradually bring Perseverance closer the surface. The vehicle was then safely lowered to ground using a sky crane maneuver twenty metres above the dirt. The wires were cut and the descent stage flew off to crash a fair distance away.

You can watch a simulation of the seven minutes of terror in the video below – or replay NASA's live-stream of the landing here.

Landing a robotic rover or spacecraft is arguably one of the most challenging tasks in space exploration: about 50 per cent of all landing attempts made by any space agency have ended in failure, according to NASA [PDF]. Given that it takes about 11 minutes and 22 seconds right now to send a message between Earth and Mars, NASA cannot monitor and control the landing process in real-time. By the time staff started receiving any data, Perseverance was already on the ground, and so it was all done under software control. Telemetry was beamed via the Mars Reconnaissance Orbiter.

Mission control staffers could only sit, like all of us, on the edge of their seats, hold their breath, and cross their fingers, waiting for the final signal that the machine had landed in one piece and receive its first images from the surface. "With such a successful track record, we make it look easy some time, but it's never easy," Munk said. "We can’t ever take it for granted. During the time we wait to hear back from the rover, all we can do is hope that we have thought of every scenario, and reduced every possible risk."

The successful landing means the Terrain Relative Navigation system has passed its test. "It will be used for the upcoming lunar landing missions in the Artemis program," said Munk. "I fully expect it will be used on everything from small robotic missions up to human-scale missions to Mars. It's a building block for precision landing technologies. It will lower the risk for crewed missions since it can perform hazard testing. The next step is trying to see if we can use a laser to construct a real-time map without having to rely on old maps so that spacecraft may one day land in undiscovered areas."

Persevering in the search for alien life

As the world was forced to adapt during the coronavirus pandemic, scientists and engineers at NASA tried their best to continue as normal. The Mars 2020 mission has been more than eight years in the making, after all, and nothing was going to get in the way – not even highly contagious human malware spreading around Earth.

NASA pushed back its James Webb Space Telescope launch by seven months, and temporarily paused testing of its SLS moon rocket, though it continued to persevere with Perseverance to meet its summer 2020 launch deadline. Although it was delayed twice, it finally managed to blast off into space atop an Atlas V rocket from Cape Canaveral, in Florida, at the end of July during a critical time window, when the distance between Earth and Mars was at its shortest for the long journey to the dust world.

Just four months after NASA's previous Mars rover Curiosity landed on our neighbor in the Solar System in December 2012, the American agency announced it was going to spend billions of dollars to create another trundle-bot that promised to be bigger and better. The end result was Perseverance: a 1,025kg nuclear energy-powered, SUV-sized six-wheeled robot carrying a tiny foldable helicopter strapped to its belly.

Built using components designed for Curiosity, the latest rover is pretty similar to its predecessor. It also comes armed with numerous cameras to snap Martian terrain, spectrometers to detect chemical compounds, sensors to monitor weather, and a robotic arm.

However, Perseverance also has a few new tricks up its sleeve, including an x-ray laser to zap rock samples, microphones to record Martian sounds, an electrolysis machine to produce oxygen from carbon dioxide, and a drill to cut off chunks of regolith to be bottled in capsules that will be collected later and flown back to Earth in a future mission, depending on funding. All in all, the vehicle has seven main instruments alongside two primary radiation-hardened RAD750 computers.

The robot's kit allows it to be a geologist on wheels. Perseverance will be hunting for signs that simple microbes once lived in the shallow waters of what is now the Jezero Crater – Czech for lake – some 3.5 billion years ago. On Earth there are stromatolites – rocky structures built from cyanobacteria secreting compounds that trap sediments in multiple layers. It may be possible that there are similar stromatolite-like materials hidden in the nooks and crannies of Jezero.

Perseverance will use its various tools to analyze a sample's chemical composition and structure to find any material that may contain organic compounds or minerals formed in water. The most promising samples will be drilled and stored into capsules for future spacecraft to collect.

Scientists probably won't be able to confirm whether alien life once existed on Mars, however, until they can get their hands on those samples. "We have strong evidence that Jezero Crater once had the ingredients for life,” said Ken Williford, deputy project scientist for the Mars 2020 Perseverance rover mission. "Even if we conclude after returned sample analysis that the lake was uninhabited, we will have learned something important about the reach of life in the cosmos.

“Whether or not Mars was ever a living planet, it’s essential to understand how rocky planets like ours form and evolve. Why did our own planet remain hospitable as Mars became a desolate wasteland?"

What's Perseverance up to now?

Mission control will establish that all instruments are working as normal before the rover begins exploring Jezero. Soon after, it’ll unleash its Linux-powered helicopter pal Ingenuity.

Ingenuity will be the first aircraft to fly on another planet. Designed to last about 30 Martian sols, it weighs about 2kg, is 1.2 metres wide, and carries two computers. The drone is more of an experiment than a piece of equipment for scientific discovery; engineers want to test its ability to fly autonomously. It can travel to distances stretching to almost 300 metres, and hover 3 to 4.5 metres from the ground for 90 seconds.

Now that Perseverance is well and alive on Mars, it'll begin that mission to find signs that Mars once supported life. "To quote Carl Sagan,” said Gentry Lee, chief engineer for the Planetary Science Directorate at NASA’s Jet Propulsion Laboratory, "‘If we see a hedgehog staring in the camera, we would know there’s current and certainly ancient life on Mars, but based on our past experiences, such an event is extremely unlikely. Extraordinary claims require extraordinary evidence, and the discovery that life existed elsewhere in the universe would certainly be extraordinary.’"

"We have been waiting for this mission for such a long time," Munk told us. "Ever since I got to NASA over 30 years ago now, scientists have been wanting to bring a sample back from Mars. I'm so excited to finally embark on this very ambitious mission." ®