A “flying car” drone being shown off at Goodwood Aerodrome in England was using unlicensed spectrum for safety-critical radio commands – and when its operators lost control the craft climbed into airspace reserved for Gatwick Airport, an accident report has revealed.

The homebuilt Alauda Airspeeder Mk.II crashed into a field near the airfield in Chichester, West Sussex, after climbing to a height of 2,398 metres (7,867 feet) – well inside one of the holding stacks for airliners flying to Britain’s second-busiest airport.

The demo flight took place on the first day of Goodwood’s annual Festival of Speed on 4th July 2019. Instead of being a short hop around the airfield to show off the craft to spectators and media alike, however, the flight ended with spectators being told to run for cover as the drone dropped from the sky into a nearby field.

A remote kill switch had failed when the drone’s operators realised the craft was no longer responding to their commands, leaving it free to fly off totally out of control. Only its low battery capacity stopped the 95kg quadcopter from flying any further.

“The kill switch was powered by an independent 7.2V battery and operated on a different frequency (433 MHz LoRa) and control system to the normal flight control system” said the Air Accidents Investigation Branch (AAIB). It added, in thinly-veiled criticism of aviation regulators: “There was no Global Navigation Satellite System (GNSS) position system fitted and no return-to-home function available, nor was there required to be.”

The drone, which was intended to carry a human (although nobody was aboard during the 2019 flight) “was not designed, built or tested to any recognisable standards”.

Just a quarter of a mile south-west of Goodwood is the town of Chichester, home to around 120,000 people. The Airspeeder Alauda climbed for four minutes until its battery ran down. Luckily it fell in a field next to the aerodrome.

A scathing AAIB report published this week found a litany of failures in the design and manufacture of the drone, including how its makers used prototyping breadboard for its onboard electronics. 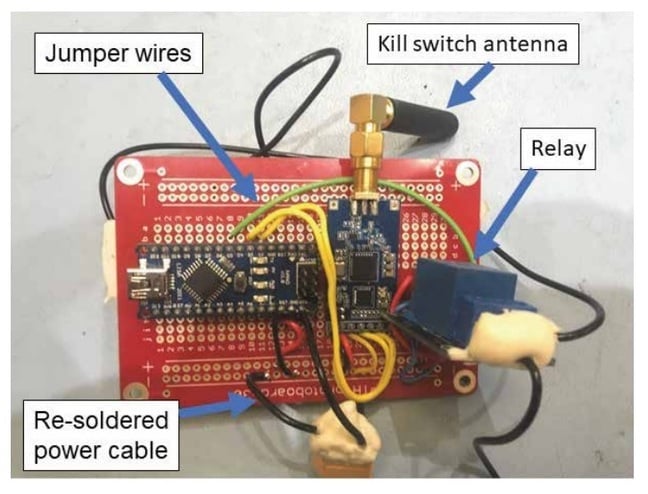 Airspeeder's killswitch. Note the use of red breadboard instead of a PCB

The cause of the “hard landing”, which severely damaged the drone, was found to be “a fault in a battery feeder cable connection.” Pictures published by the AAIB showed the quality of workmanship that went into the craft.

Burnt soldering and inverted components on the Airspeeder's control board

The drone even penetrated Class A controlled airspace over the Goodwood VOR radio beacon, inside a cylinder of the sky reserved for airliners between 7,000ft and 13,000ft.

Although Airspeeder’s Australian-approved safety manual gave details of how crowd safety distances were to be calculated, the operators used an outdated Google Earth satellite picture as their reference – not realising the airfield layout had changed in the years since it was taken.*

Australia’s Civil Aviation Safety Authority had issued safety certificates to Airspeeder – and Britain’s Civil Aviation Authority (CAA) had, based on those certificates, given the firm permission to fly in the UK. Yet British regulators were kept in the dark about a crash just the day before the public flight, found the AAIB.

A switch on the drone and its controller could have flipped it from 915MHz to 868MHz – a busy but unlicensed band reserved for LoRa IoT wireless comms, such as the ones used in UK smart meter rollouts.

Incredulous AAIB inspectors said: “In the ‘UAV Signal Loss’ section of the [operating safety case], it stated that ‘All spotters will be equipped with kill switches and radios, spotters will be positioned such that there are no blind spots on the flight path of the UAV, in addition a spotter will be next to the pilot in command’. On the day of the accident, only one kill switch was available which was located with the spotter standing next to the remote pilot.”

In a prepared statement Airspeeder told The Register: “There was a short loss of control caused by unforeseen external factors affecting our control systems. Since the incident was concluded we have worked with regulators and the appropriate bodies to provide all required information. Recommendations made have been addressed and the company has since moved through three successful development phases.” ®

* The AAIB criticised Airspeeder for not consulting the UK Aeronautical Information Publication (AIP) entry for Goodwood when calculating crowd safety distances. This is a bit of a red herring: the AIP contains nominal distances such as runway lengths and taxiway widths along with a schematic of the aerodrome layout.

It doesn’t contain the information the drone operators needed, which was the distance between the runway in use and the crowd line. That could have been obtained from Goodwood Aerodrome itself.