Toyota on Tuesday broke ground on "Woven City", a smart city project in Japan that doesn't permit private cars and where your robot might stock your fridge.

The master-planned community, named as a reminder of Toyota's origins as a maker of looms, sits on 700,000 square meters of retired manufacturing plant at the base of Mount Fuji. The repurposed plant is marketed as a "living laboratory" for mobility-related technologies, robotics, artificial intelligence, smart homes, and sustainability. The city's design includes energy-efficient wooden buildings partly made by robots, plus power from solar energy, geothermal energy, and hydrogen fuel cells in a nod to Japan's carbon-neutrality ambitions.

Toyota e-Palettes, battery-electric vehicles that were set to feature at the delayed 2020 Tokyo Olympics, serve as the autonomous vehicles. These vehicles offer ride-sharing and carpooling, plus delivery services, mobile retail shops, and even mobile hotels or workspaces. Toyota is betting on autonomous mobility as a service, what they refer to as Autono-MaaS.

Woven City is studded with sensors and governed with software to operate the e-Palettes and perform domestic tasks within the smart homes. While automated cars are exciting to some, others will be thrilled to find a robot restocking the fridge, taking out the trash, and even reminding residents to visit their doctor.

The community is designed to initially accommodate 360 residents. At full capacity it aims to house 2,000 individuals, among them Toyota employees, inventors, senior citizens, and families. 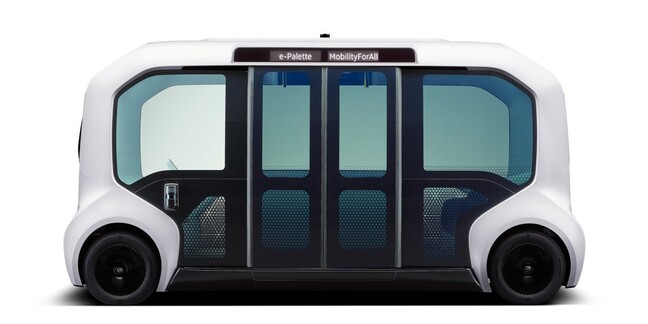 A Toyota announcement explains that the City is intended to serve as both a laboratory and help the company "shift from an automobile manufacturer to a mobility company."

Woven City is a partnership with Japanese mega-telco NTT. Danish architecture firm Bjarke Ingels Group came up with the city's master plan. A project completion date was not announced. ®