Valheim: How the heck has more 'indie shovelware with PS2 graphics' sold 4 million copies in a matter of weeks?

Now, this might shock you, but it's something we like to call 'fun' (if you have friends)

The RPG Greetings, traveller, and welcome back to The Register Plays Games, our monthly gaming column. Loath as I am to feature another early access survival-exploration-crafting adventure for the second month in a row, February's sleeper smash-hit, Valheim, has forced my hand. So onwards, now, to the 10th realm of Norse mythology. Yeah, there was an extra one, didn't you hear?

How does "indie shovelware with PS2 graphics", as one angry gentleman on the internet put it, sell four million copies in three weeks? It is indeed odd that Valheim seemed to emerge from the mists of Ginnungagap on 2 February to take the Steam charts by storm, but stranger things have happened.

Why do millions keep playing Minecraft? Why have hundreds of thousands flocked to World of Warcraft Classic, which returned Blizzard's definitive MMORPG to its pre-expansion state of 2004-2007? It's pretty simple and feels almost stupid to say out loud. Graphical fidelity isn't everything; gameplay and design reigns supreme. Get that right and folk will talk about it, tell their friends.

Subnautica and Below Zero: Nurture your inner MacGyver and Kevin Costner on an ocean-planet holiday

"Hey mate, have you heard about that game where you're stuck in a Viking underworld and have to build tools and shelter to survive, then you go out and explore this enormous procedurally generated PLANET that spans a bunch of unique biomes?"

"I have not but it sounds cool."

"It does, and it's co-op so we'll only get dicked on by the AI enemies instead of squeakers. It's 15 quid too."

Which is how I imagine millions of internet exchanges went over the course of this month. People enjoy games where they can create and explore, where progression is organic and logical, where the goals are clear and the feeling of accomplishing them gratifying. Nor can everyone run the latest and greatest AAA titles, but at least "indie shovelware" is accessible. 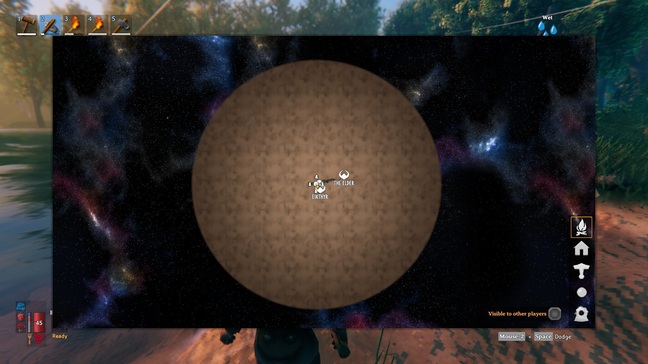 Valheim is basically a planet, and we've explored less than 1 per cent in six hours

There's also the fact that life has changed over the past year, in some ways irreversibly, and, as we've explored already, co-operative gaming these days is a peerless way to socialise if it's your thing. Zoom alcoholism sessions be damned.

All these ingredients have played into Swedish developer Iron Gate's hands, and going by news posts they're as surprised by their debut's success as anyone. Yes, one could argue that the survival genre has had its day in the sun, that it's tired and overdone.

Yes, it's powered by Unity, the engine behind the glut of bedroom projects that followed DayZ's equally unexpected success. Yes, on logging in you might see the voxel shading on the ground and think, "Is it supposed to look like that?" But "shovelware with PS2 graphics"? 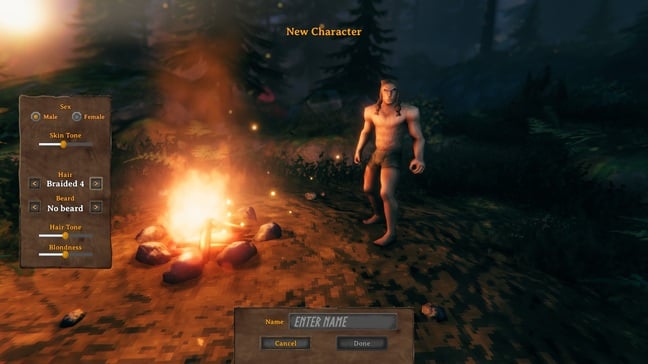 Our angry internet gentleman is mistaken. Though at a glance Valheim looks little better than the aforementioned vanilla World of Warcraft, it is astonishingly pretty in its own old-school way, thanks to the modern lighting effects sprinkled on top, a lot like The Touryst on the Switch and Xbox.

"Retro" is the operative word here. It's not so much down to limitations – last month's subject, Subnautica: Below Zero, is beautiful and also made in Unity – as it is a love letter to adventure-RPGs of the past. There's a distinct Zelda and Runescape vibe, but it also takes cues from more recent hits, like the blocking, parrying, and dodging systems of the Dark Souls series – and just like the Dark Souls series it can be brutally unforgiving. 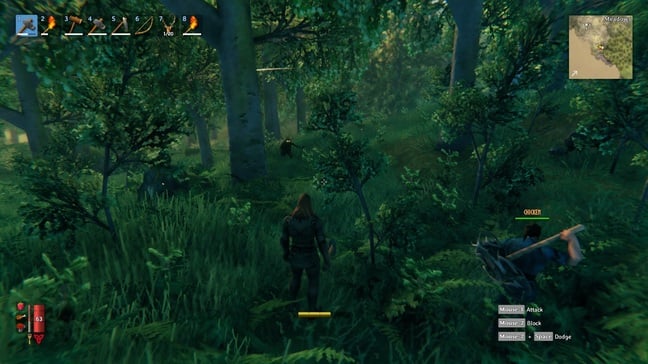 A bogeyman approaches while we collect wood

"Valheim" refers to the 10th world of Norse mythology, previously unheard of seeing as nine was the important number in that culture. There were nine realms on the cosmic tree Yggdrasil, which the chief deity, Odin, hanged himself from for nine days and nine nights to uncover the wisdom of the runes, and so on.

On the wings of a valkyrie, you, a fallen Viking warrior, are plopped down into this purgatory and left to fend for yourself by collecting resources to build tools, shelter, and equipment. Mercifully, the common survival pitfalls of food and drink management is pared back, with grub serving only to buff stamina and hit points. You are already dead after all. 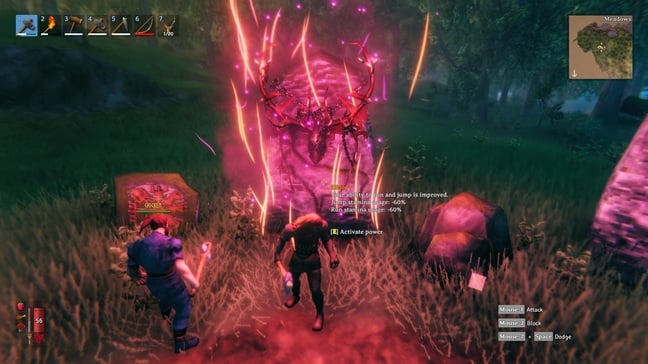 Although one of Odin's ravens, Hugin ("Thought"), will occasionally pop in to drop some juicy pointers, the setting is almost entirely incidental. The real pull of Valheim is its ability to spin awesome, immersive, unscripted, sandbox adventures for you and your clan.

The flow of the game is governed by the conquering of different world bosses, each of which open more crafting capabilities needed to progress and a special ability. Exploration must be carried out in order to first locate them, complicated by the map's fog-of-war nature, then you can start to think about how you're going to cross the immense distance to get there, with zero intel about what might happen along the way. 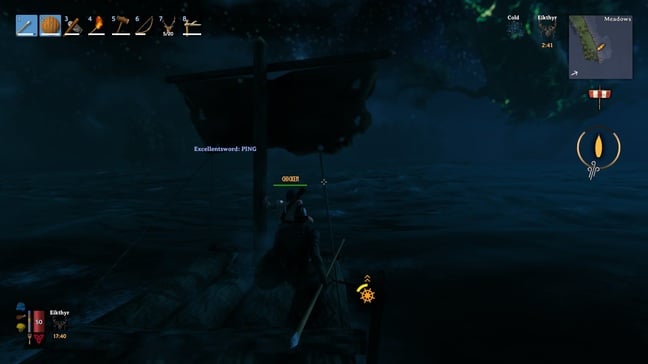 Our maiden voyage was fraught with treachery

If one of the many comically designed varieties of enemy overpowers you, all the gear you took out on that foray will be left at the site where you died. You will spawn back at the last bed you slept in and be faced with a choice – run back naked to collect it, dodging all the other foes between you and your grave, or put a bit of work in to re-establish yourself, collecting resources and crafting equipment all over again to return with a slightly more solid plan than before. 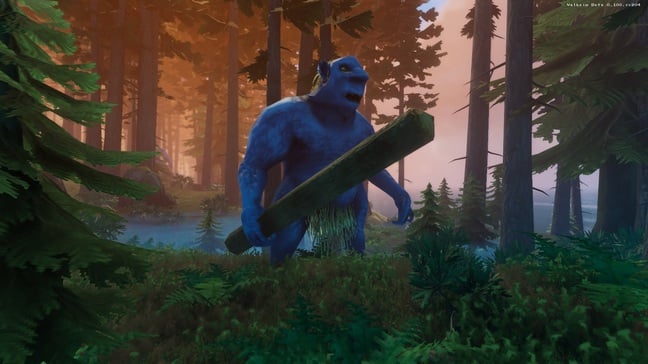 Huge trolls stalk the more dangerous parts of the realm

For example, my comrade and I discovered that our next target, a giant tree-like being, was on a completely separate body of land from us. So we managed to fashion a raft and tentatively took our first voyage over water, getting stuck on sandbanks and negotiating islets until we arrived in a swamp. We jumped off only to be immediately swarmed by giant leeches. Death followed swiftly. In this case, there was no option to run back. We would A) need another boat, and B) we'd have to replace our gear if there was any chance of reclaiming what we dropped. A punch in the gut to be sure, but the adventure from beginning to end was a joy. 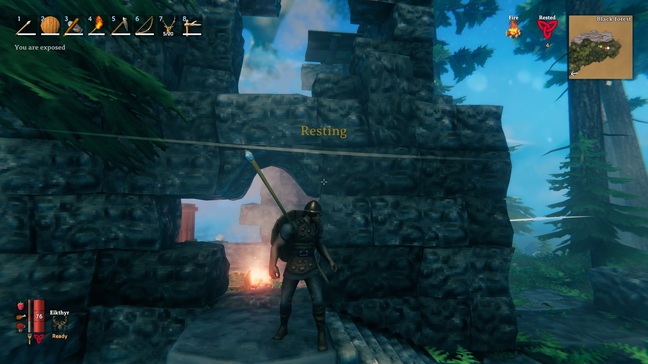 Another thing Valheim has going for it is the building system. You can sling up a basic shack to start off, but eventually you'll need more space to hold your resources, and subsequent structures must obey the laws of gravity and architecture more generally. Your workbench – the crux of all crafting – will not be useable unless it is sheltered from the elements so you have to figure that out. 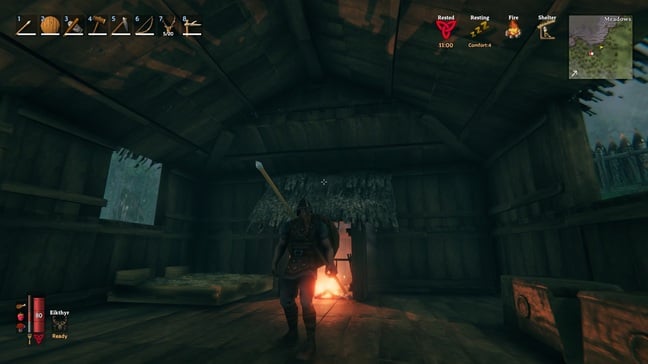 I'm proud of our humble longhouse

Then you cannot simply stack things one on top of the other à la Minecraft; you need beams and supports, otherwise the whole thing will come crashing down. Interior fires will not stay lit unless some sort of chimney is implemented. Due to the large selection of modules – walls, floors, roofs, furnishings – the result can be some quite realistic houses and keeps. The potential here is endless, and those who enjoy city building will definitely get a kick out of it.

The player limit per dedicated or p2p server is 10, player-versus-player can be toggled, and inventories can be carried over different servers – so you can probably see how a group of gamer pals or an internet community could have a lot of fun with Valheim.

Playing solo is possible as the difficulty scales to the number of people in a game, but file this one under "better with friends". The success of Valheim is in that shared experience, the thrill of adventure, hurtling into the unknown with firm companions by your side. It'd be cool to set up with one's kids, for example, if they're old enough to grasp the mechanics (and you have enough capable machines). It also helps that, despite early access status, Valheim feels finished and runs pretty OK too, though there's still some optimisation work to be done there.

And what's this? It's Linux-native too? Gosh. ®

Fancy playing along or just doing some backseat gaming? You can follow The RPG columnist Richard Currie's Twitch channel here, on live most nights from ~9pm UTC.

If your device is becoming unresponsive, there's a workaround
Software17 Nov 2022 | 76