The virtual reconstructions based on previously published fossil specimens by researchers at the Universidad de Alcalá, Madrid, Spain and Binghampton University in New York, US, have shown that the occupied bandwidth of Neanderthal hearing was in the same range as that of modern-day humans, and also greater than that of earlier hominin samples recovered in Sima de los Huesos, the "pit of bones" in the Atapuerca Mountains, northern Spain.

A wider bandwidth allows for a larger number of easily distinguishable acoustic signals to be used in the oral communication of a species. 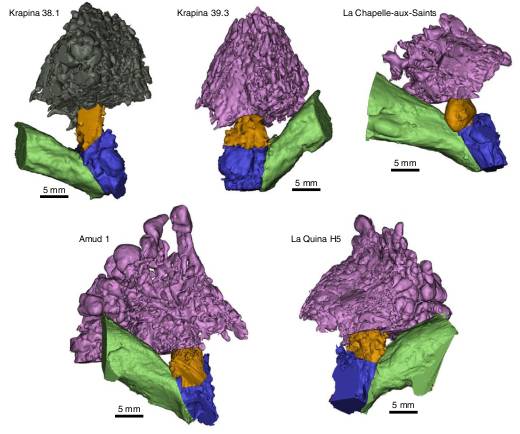 The scanning and computer-modelling of samples, which were then compared with known occupied bandwidth of hearing in modern humans, shows Sima de los Huesos with a median of 2.8kHz, Neanderthals with around 3.3kHz and modern humans with around 3.4kHz. Crucially there is significant cross-over in the apparent hearing range of the more recent, more closely related human species, according to the paper published in Nature Ecology & Evolution.

Neanderthals roamed across Europe and Eurasia from around 430,000 to around 40,000 years ago, until they mysteriously died out. Modern humans evolved in Africa about 200,000 years ago and may have been in Europe off-and-on for 150,000 years, meaning there was a long cross over period between the two species of humans.

Evidence of the occupied bandwidth (OBW) of Neanderthals is significant given what we know about hearing and language in our species, the researchers, led by professor Mercedes Conde-Valverde of Universidad de Alcalá, argue.

"The OBW in Neanderthals extends towards frequencies that primarily involve consonant production, suggesting that this may have been an important component of their vocal communication, one that would distinguish them from the pattern of largely vowel-based vocal communication in chimpanzees and, indeed, nearly all mammals," the paper said. 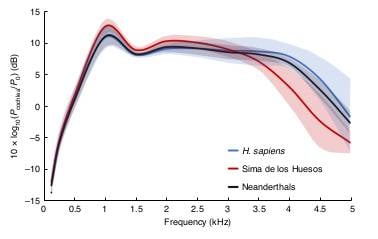 Much of the accoustic information in human speech is concentrated in the region up to around 2.5kHz, the frequencies of the vowels. The region of 3–5kHz is associated with the production of high-frequency consonants such as the voiceless plosives (in the English "p", "t" and "k") and the fricatives (eg, the English letters "f", "s" and "th").

"Importantly, because these consonants are voiceless, they do not propagate across the landscape and are limited to short-range intraspecific (with-species) communication. Indeed, voiceless consonants may represent '…the evolutionarily oldest group of consonants'," the paper argued.

At the same time, hearing loss in these higher frequencies results in diminished comprehension of heard language. "This relationship between consonant production and an extended OBW helps make the link between audition and vocalisation explicit and helps explain how an extended OBW corresponds to a vocal communication system in Neanderthals that was as complex and efficient as human speech," the paper said.

The archaeological evidence also suggests complex Neanderthal behaviours that might be associated with linguistic communication. These include the sophistication of their strategies in seeking out resources, their production and use of fire, the possible construction of musical instruments and the expression of symbolic behaviours, including art. "In our opinion, this is strong evidence in favour of the coevolution of increased behavioural complexity and increased efficiency in vocal communication throughout the course of human evolution," the paper said.

The authors said they had shown Neanderthals had the hearing necessary to support a vocal communication system as "complex and efficient as human speech."

"It is true that the presence of the anatomical 'hardware' necessary to produce human-like speech in the Neanderthals does not necessarily imply the presence of similar mental 'software' as in homo sapiens and, by implication, the presence of a language with the same characteristics as that of our own species," the authors said.

"Nevertheless, our results, together with recent discoveries indicating symbolic behaviours in Neanderthals, reinforce the idea that they possessed a type of human language, one that was very different in its complexity and efficiency from any other oral communication system used by non-human organisms on the planet." ®